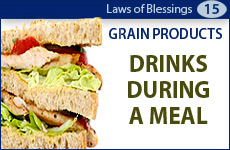 When you drink during a bread meal, when is a bracha required and when is it not?

In the last two classes, we've been discussing what foods are covered by the bracha Hamotzee said at the beginning of a meal. The basic rule is that foods eaten for sustenance are covered by Hamotzee, and foods eaten for other purposes are not covered. How does this rule apply to drinks? When you take a drink during a bread meal, when is a bracha required and when is it not?

There are three possible reasons why you'd drink during a meal:

Quenching Thirst: Since a meal generally consists of eating and drinking, beverages served during a meal to quench your thirst are covered by the Hamotzee on the bread.1 The majority of drinks during a meal fall into this category.

Whetting the Appetite: Similarly, when you take a drink in order to stimulate your appetite, the drink is considered part of the meal and is therefore covered by Hamotzee.2 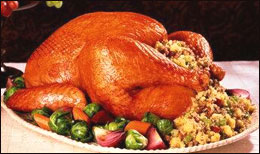 "In Russia we always started out the meal with a shot of whiskey,"3 Mindy's grandfather told her. "It gave us a hearty appetite. We would say Hamotzee on a piece of bread and then 'bottoms up!'"

Aiding Digestion: Drinking a beverage solely in order to aid digestion is not regarded as eating for satiation. Therefore, such a beverage is considered unrelated to the meal, and a bracha is required.4

Mike ate so much at the holiday dinner that he felt like a stuffed turkey. He asked for a cup of hot tea to help digest the meal, and said Shehakol.

Frequently, however, beverages for "digestion" are also being consumed as a regular drink. In such a case, or in a case where you cannot determine exactly why you are drinking, a bracha is not said on the drink.5 Preferably, you should say Shehakol on something else (e.g. a candy or piece of chocolate), having in mind the drink as well.6 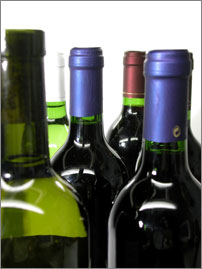 We learned in class #8 that wine (and grape juice) was prescribed its own bracha because it is considered more important than other beverages. Another consequence of wine's elevated status is that it requires a bracha when consumed during a bread meal.7 Even though it is part of the meal, wine is not covered by Hamotzee said on the bread.

We also learned that the bracha on wine covers other beverages that you plan on drinking. This being the case, if you are drinking wine during or before a bread meal, then Shehakol is not required on any subsequent drinks during the meal – even if the drink would have required a bracha – since they were covered by the bracha Ha'gafen.9

Of course, for the wine to "cover" other drinks during the meal, it needs to conform to the standards we mentioned in class #8:

The minimum amount is a Talmudic measurement called melo lugmav (lit: "a cheekful"). Although opinions vary, the consensus is that 2 fluid ounces (approx. 60 cc) is sufficient.10

Now let's consider the following common example: Following synagogue services on Shabbat morning, the rabbi said Kiddush on wine, and everyone said Mezonot and ate some cake and kugel. Now you want to drink some soda. Does it require a Shehakol or not? That depends:

At this point in this course we have completed the rules of what kinds of food and drink require a bracha during a bread meal. Before continuing, let's quickly review the principles learned in the last three classes.

Class #14: Fruit during a Bread Meal

Class #15: Drinks during a Bread Meal

This concludes class #15 on Hilchot Brachot. In the next lesson, we'll discuss the important topic of the proper sequence of brachot.