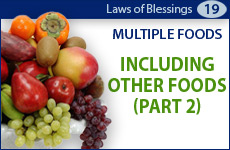 The bracha said at the beginning of the meal covers all foods normally consumed in a meal.

In the previous class we discussed saying one bracha on numerous food items. We learned that a bracha covers any additional food you are intending to eat, or any food that fulfills one of the following three conditions:

Now let's learn some more permutations of these rules.

Until now we've been discussing someone who is eating a snack. In the case of a meal, however, it is much simpler. Any foods or drinks that are normally brought out during the course of a meal are covered by brachot said at the beginning of the meal.1 The idea is that whatever you naturally expect to be eating, is considered to have been on your mind when saying the bracha.

This is not only true of a proper meal, but even a snack that is eaten in a set manner, e.g. a group sitting around a table eating fruits. Any other fruits brought out are covered by the original bracha. If that is your usual practice, then it is considered as "intent" – even if the second food was not in front of you at the time of the bracha, and even if none of the original food remains.2

After bringing out the apple juice, Debby wasn't sure whether she needed to say Shehakol again or not. "We always drink apple juice with lunch," her husband assured her. "It was covered by your Shehakol on the egg salad."

Similarly, in societies where people always drink something with the meal, we assume that drinks are coming, and the bracha on the food covers the drinks.3

The following section is very important because it is an exception that can actually override some of the rules that we've learned in the previous few classes. So follow closely:

We learned in class #16 that there is a specific, prescribed order in which to say brachot on foods. When two foods require the same bracha, the bracha is recited on the more important of the two. (Our mnemonic was seven-whole-favorite-size.) What happens if you accidentally said a bracha on the less important food? Is the more important food covered by this bracha or not?

The answer is that the more important food is covered only if you have specific intent to cover it with your bracha.4 In this case, having the food in front of you, or if some of the original food remains, will not help. The implicit intention that works for meal-foods does not apply in this case, either. Any time you mistakenly say a bracha on the less important food, the more important food requires a new bracha – unless you had it in mind when reciting the original bracha. 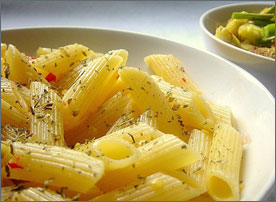 This means that if you say a bracha on a cookie made of oats, it will not cover a cookie made of wheat. (Although both are of the seven species (the Sages include oats under the header of barley), wheat is more "important" than oats, since it comes first in the verse Deut. 8:8.)

Similarly, saying Mezonot on pasta (Ma'aseh Kedeira) will not cover cake, which is Pat Haba'ah B'Kisnin and has greater importance because it sometimes requires Hamotzee, i.e. when eaten as a full meal (Kiday Seuda).5

And just to keep things interesting, here's an exception to the exception: If you say a bracha on a food that is chaviv (preferred by you), a new bracha is not said on the second food even if it is more important. This is because according to some opinions, chaviv is always considered more important.6 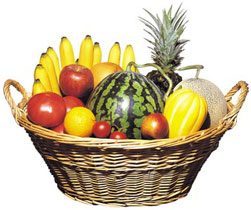 So now let's look at a practical case: After eating a pear from the fruit basket on the table, you reach back into the basket for some grapes. Should you say Ha'aitz again, since grapes are one of the seven species? That depends. If you specifically had the grapes in mind when saying Ha'aitz on the pear, or if you like pears more than grapes (chaviv), then you would not say a new bracha on the grapes. (Of course, in retrospect, you still should have said the bracha on the grapes first.)

These halachot are just another reason why it's important to say brachot in their proper sequence. To help you review the material from classes #16 and 17, here are our short memory-phrases for the hierarchy of foods:

List #2 – With foods that have the same bracha, the order is:

List #3 – With foods that have a different bracha, the order is:

An invited guest does not know what foods he is going to be served. Therefore, whenever a guest says a bracha, he automatically intends to cover any other foods requiring that bracha. This is true even if the guest has no specific intention about what his bracha is meant to cover. Since he does not know what food will be served, his brachot are "open-ended."7

The same is therefore true of anyone who is being served by others, e.g. a child whose parent prepares him a meal or a snack.8 The halachic term for this is: Da'at Ba'al Habayit – lit: [according to] the host's intentions.

This applies even if the guest is served a more "important" food than the one on which he said a bracha. He should not say a new bracha, since it is as if he had explicit intention to cover that food.9

What this means is that you could have two people sitting together and eating the exact same foods, and as new foods are brought to the table, the host could wind up saying the same bracha (Shehakol, for instance) numerous times, whereas the guest will say it only once.

As we've been discussing, anything you have in mind to eat when saying a bracha is covered by that bracha. It is therefore recommended that whenever saying a bracha, you have explicit intent to cover any food or drink requiring that bracha.10 By doing so, you alleviate yourself of the necessity to say another bracha.

As we have seen, determining when another bracha is necessary can be very complicated. Therefore, the best and safest way to go is to explicitly have all foods and drink in mind. Because you never know what else you might want to eat...

Given that the underlying principle of these halachot is "intent," it therefore follows that if you specifically intend not to eat a particular food, the bracha does not apply to that food.11 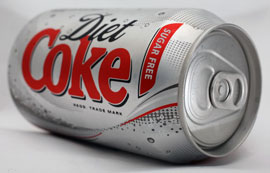 This could be a common case for dieters. "Only water for me," you say, before reciting Shehakol. "I don't drink anything else on my new diet." By the end of the meal, you have a craving for a sweet drink. "Pass me the Diet Coke," you mutter. And even though it was on the table at the beginning of the meal, you'll need to say Shehakol again.

This rule applies even to a case where you say Hamotzee with very specific intent to eat, for example, only one slice of bread. If your willpower then breaks down and you want more bread, you will have to say a new bracha!12

The same is true of food that comes from an unexpected place. If, after saying a bracha, you suddenly acquire a new food in an unanticipated fashion, a new bracha is required.13 Since you certainly did not intend to eat this food when saying the bracha, it is not covered.

You're sitting at home eating an orange when the doorbell rings. It's your cousin who just returned from vacation in Florida, and he's brought you a crate of fresh Florida oranges. Even though you've already been eating oranges, you'll need to say another bracha on these new oranges.

At this point, we have completed the rules of a bracha covering numerous food items. Before we continue, let's review the principles learned in the last three sessions.

List #2 – If two foods have the same bracha, the order of priority is:

List #3 – With foods that have a different bracha, the order of priority is:

Or, the shorthand mnemonic:

List #4 – Within Ha'aitz and Ha'adama, the order of priority is:

This concludes class #18 on Hilchot Brachot. In the next lesson, we'll begin the new topic of when the effect of a bracha is terminated.

3. When is a Bracha Not Required?

13. Other Foods at a Bread Meal

44. The Aish Academy Brachot Food Guide
Blocked Goals and Anger
Why the Mezuzah is Placed on a Slant
Faith: the Axis Upon Which the Wheel of Science Turns
Comments
MOST POPULAR IN Jewish Law
Our privacy policy