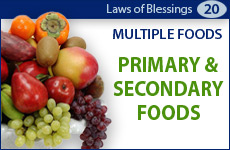 A bracha on the primary food also covers the secondary food.

We're now going to learn a very basic and essential concept in Hilchot Brachot called "ikar v'tafel" (in Ashkenazi pronunciation, rhymes with "sticker" and "truffle"). Whenever two foods are eaten in combination, one of the foods is defined as the ikar – the primary food, and the other as the tafel – the secondary food. And here's the rule:

The bracha on the ikar food covers the tafel food as well,
on which no separate bracha is said.
1

The ikar food is defined as the ingredient which is the "logical" reason for eating this food-mixture. This is subjective, as determined by you the eater.2 Sometimes the ikar is the ingredient that you most desire, sometimes it is the majority ingredient, and sometimes it is based on the function that particular ingredient serves in this mixture. The next three classes will discuss where to apply each of these factors.

The tafel (secondary food) enhances the ikar because it only adds taste, texture, volume, etc. to the main ingredient, and it is not the primary reason for eating the food. However, if this ingredient is desired for itself, apart from the main ingredient, then it is also considered an ikar, and requires its own bracha.3

We'll explore when and how these rules apply. But first, we need to differentiate between different types of food mixtures. 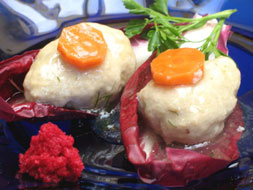 One category of ikar v'tafel is when you are interested in eating two different foods, but one food is being used primarily to enhance the taste of the other.4 The determining factor is: What food do you specifically desire?

Here are a number of examples:

In each of these situations, you are enjoying the taste of two separate foods that normally require separate Brachot. However, since one food serves to enhance the other, the bracha on the main food (the ikar) covers the enhancer (the tafel).5

This applies even if the tafel ingredient constitutes the majority.6

What about a case where you have a little of the tafel food left over? For example, you pour yourself a bowl of Cheerios and add milk. You only say the bracha of Mezonot on the Cheerios, because the milk is a tafel (enhancer).8 Twenty spoonfuls later, you have finished the last Cheerio, and now there's some yummy sugary milk left in the bowl. 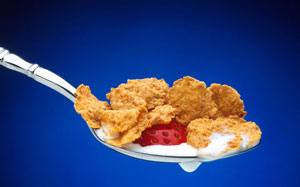 In such a case, you can drink that milk without saying a separate bracha. As a "bit of leftover," it is still considered part of the Cheerios-and-milk combination, and covered by the original (Mezonot) bracha.9

If, however, you then add some more milk to the bowl because you want milk for its own sake – or if a large amount of milk remains and you want it for its own sake, then the milk does require its own separate bracha.10

What about a (non-bread) sandwich of two foods slapped together? The rules are:

So let's say you're eating tuna on a rice cake. The proper bracha depends on how you view each of the foods:

Until now, we've primarily discussed cases where one food is spread on (or coating) another food.

A second category of ikar v'tafel is when separate foods requiring different Brachot are mixed together in a way that the ingredients are combined into one mass, or when they are cut into small pieces and eaten together.12 In such a case, even though you desire each of the ingredients and neither is there to merely enhance the other, nevertheless only one bracha is recited, since the mixture is defined as "one food." 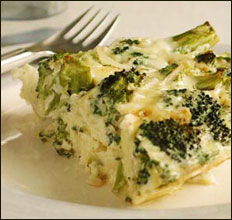 In this type of ikar v'tafel, the correct bracha is usually determined by the majority ingredient.13

Let's say you're eating a broccoli quiche made of eggs and broccoli baked together. Since the egg-broccoli mixture is now one dish, only one bracha should be said. And the "majority rules": If the majority is broccoli, then the bracha is Ha'adama; if the majority ingredient is egg, the bracha is Shehakol.14

Another example is chicken chow mien, consisting of sliced pieces of chicken mixed into sautéed vegetables. If there are more vegetables than chicken, then the bracha is Ha'adama. This is true even though you may be more interested in the chicken than the vegetables,15 and even though the chicken pieces are clearly distinguishable.16 Since the two foods are combined together, the majority food determines the bracha.

But how is this different than the case of cereal and milk (i.e. Type #1) that we discussed before? The answer is that the purpose of the milk is to enhance the cereal; but here, the vegetables have their own important, not just to enhance the chicken.

This rule applies even when the items are not cooked/baked together, but are merely mixed18 – for example a fruit cocktail which contains small pieces of bananas, pineapples, pears and apples. Although each piece of fruit remains separate within the mixture, nevertheless only one bracha should be said, since they are eaten together. To determine which bracha to say on the fruit cocktail, you need to know whether the majority of ingredients are Ha'aitz (apples and pears) or Ha'adama (bananas and pineapple). 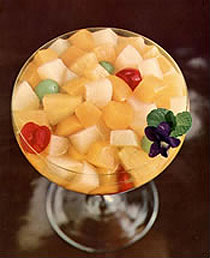 Let's say that your fruit cocktail has a majority of apples and pears, so you said the bracha Ha'aitz. After a few bites, you dig in for another spoonful and by chance you get only pieces of bananas and pineapple. Would you then have to say a bracha Ha'adama? The answer is no, because the spoonful of bananas and pineapple was unintentional, and hence inconsequential.19

Now let's change the case a bit. Let's say that after a few bites, you think to yourself, I really like the banana pieces. I'm going to spoon one out and eat it by itself. In such a case, since the banana is no longer being eaten in combination, and it is being eaten specifically for its own sake, you would need to say the bracha Ha'adama.20

A. Eaten Together – A mixture is only considered "one food" if the pieces are small enough to be eaten together in one spoonful (or fork-full).21 But if you are eating steak together with potatoes, although they are on the same plate and part of the same meal – and even if they were cooked together – each food requires its own bracha, since each is its own separate entity.22

B. Unclear Majority – If you are unable to determine which food is the majority, then you should:

C. Ikar First – When eating an ikar v'tafel combination, you should be careful that the first bite after the bracha includes some of the ikar food, and not the tafel alone.26

If for some reason you eat only the tafel food first, then it cannot be regarded as "tafel," and you would need to say the bracha that is appropriate for that food.28 However, this should be avoided, as it may constitute a problematic "unnecessary bracha," as we will see in class #23. 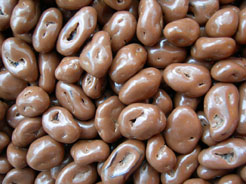 But not so fast. It turns out that the issue of chocolate-covered raisins is a dispute amongst contemporary authorities, with a range of opinions:

In actual practice, you should speak with your rabbi, or you could always say the Brachot Ha'aitz and Shehakol on other foods – having in mind the chocolate-covered raisins. Enjoy!

This concludes class #20 on Hilchot Brachot. In the next class, we'll continue to explore the guidelines of ikar v'tafel.

39. Answering Amen
The Blue Beyond
Great Place to Live
Is Eating Supposed To Be Spiritual?
Comments
MOST POPULAR IN Jewish Law
Our privacy policy