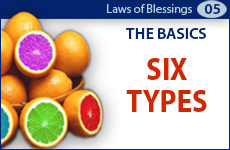 Getting practical: The six basic brachot said on food.

Following a short series of introductions to the concept and structure of brachot, we will now begin learning the day-to-day applications: the specific brachot that are said before eating foods.

The bracha that one says before eating or drinking is known as a bracha rishona (literally, "first blessing"). The Sages grouped all foods and drink into six different categories, and assigned each of these categories its own specific bracha rishona.

The text of all six brachot begins the same way:

Baruch Ata Ado-noy, Eloheinu Melech ha'olam
Blessed are you, God, our Master, King of the world.

This phrase is then followed by the subject of the bracha, i.e. what it is you are blessing God for. The categories of foods and their assigned brachot are:

In the chart above, notice the first column which we've called "Shorthand Reference." Throughout this course, we will refer to these brachot by shorthand. So, if we say: "Before eating an apple, you should say Ha'aitz ," this means that you should recite the full text of that bracha.

Click here for a PDF printout of the text of these six brachot.

Here are the audio pronunciations of these six brachot:

In the remainder of this class, and in the coming lessons, we will deal with the parameters of each of the brachot listed above. We will learn exactly which foods receive which bracha, and how altering the state of a food can affect a change in its bracha. The first brachot we will discuss are Ha'aitz and Ha'adama.

The Definition of a Tree

Although for most fruits the appropriate bracha is Ha'aitz, not everything commonly referred to as a "fruit" falls in the halachic category of "pri Ha'aitz " – literally "fruit of the tree." In terms of Hilchot brachot, the key definitions are: 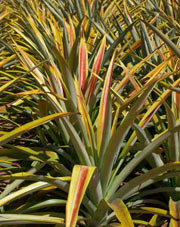 Sometimes this can be tricky. The banana plant, for example, which can grow to great heights, is not regarded as a "tree." Since its shoots produce fruit only once, and then become part of the central stem and no longer bear fruit, the bracha on a banana is Ha'adama.5 The same is true for pineapple. (There are, however, a few species of bananas that are halachic "trees," so if you know specifically that this banana grew on a tree, the bracha is Ha'aitz.)

Similarly, many "wild" plants, even though they produce fruit from year to year, are not considered trees. If only their roots remain and their trunk (or stem) dies out or stops bearing fruit, they do not qualify for the bracha Ha'aitz. The bracha on strawberries, raspberries (whose branches typically grow fruit only two years), and wild berries, therefore, is Ha'adama.6

Conversely, many bushes and vines, even though they do not resemble a tree, are considered "trees."7 As long as their branches remain alive year round, the product of these plants receive the bracha Ha'aitz. This includes fruits such as blueberries and grapes.

If, however, a bush grows very close to the ground (within nine inches), common practice is to say Ha'adama on its fruit, even though it qualifies as a "tree."8 For this reason, the bracha on cranberries is Ha'adama.9 Note that many cultivated berries today grow on relatively large bushes and warrant the bracha Ha'aitz. 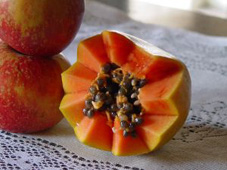 There are some fruits whose bracha is subject to dispute because it is unclear whether the plant qualifies as a "tree." The papaya, which grows on a tree that resembles a vegetable plant in numerous ways, is one such example. In such a case, you should say Ha'adama, since this bracha is a catch-all that covers tree-fruits as well.10

Similarly, if you are unsure whether a particular fruit falls into the category of "pri Ha'aitz " or not, and you are unable to find out,11 you should say Ha'adama on that fruit.12 The reason is because every fruit, even if it grows on a tree, is also a product of the ground. Therefore, the bracha "pri ha'adama " is an appropriate catch-all.13

However, if you don't know which bracha to say because you didn't learn the halachot, you may not rely on this. Rather, you should go and learn the halacha (or ask an authority) and then say the proper bracha.

As we mentioned, the bracha Ha'adama is appropriate for all produce, since all fruits and vegetables come from the ground. Therefore, if you accidentally said Ha'adama on a fruit whose bracha is Ha'aitz, you may continue eating without correcting your mistake, so that the bracha will not have been in vain.14 (If possible, you should eat another Ha'adama item and recite the proper bracha.)15

If, however, you said Ha'aitz on a vegetable (or even a banana), your bracha is invalid. Since vegetables don't grow on trees, "borei pri Ha'aitz " is inappropriate and you must say a new bracha.16

One of the six types of brachot on food is " shehakol nih-yeh17 bid-varo," which means "that everything came into being through His utterance." Unlike Ha'aitz and Ha'adama, Shehakol is not specific to any particular type of food. It is said on all foods that don't grow from the ground. This includes: The words "shehakol nih-yeh bid-varo" are a general reference to all of God's creations. Therefore, if you said Shehakol on any food, even foods that have their own prescribed bracha, the bracha is still valid.29 Of course, you should not rely on this and substitute Shehakol for the appropriate bracha when it can be determined. In certain cases of doubt, however, you may say Shehakol even though you're not certain that it is the correct bracha, since Shehakol covers everything.30 However, when possible, it is best to avoid the doubt by eating the food within a bread meal, where the bracha Hamotzee on the bread covers the entire meal31 (as we'll discuss in class #13).

Further, there are certain instances when a food loses its specific bracha and the bracha for that food then becomes Shehakol. For example, if a fruit is blenderized to the point that it is no longer resembles the original fruit, it loses the bracha Ha'aitz 32 and instead becomes Shehakol. We will learn more about this in the next class.

As well, future classes will discuss the specific brachot Hamotzee (on bread), Mezonot (on grains), and Ha'gafen (on wine). Stay tuned!