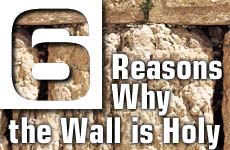 The Western Wall is at the root of the Jewish nation.

1) Site of the Holy Temple

The Western Wall is a surviving remnant of the Temple Mount in Jerusalem, which was destroyed by the Romans in 70 CE. The Temple was the center of the spiritual world, the main conduit for the flow of Godliness. When the Temple stood, the world was filled with awe of God and appreciation for the genius of the Torah.

It is here, on Mount Moriah, that Isaac was bound for sacrifice. And it is here that his son Jacob dreamed of the ladder ascending to heaven.

Although other parts of the Temple Mount retaining wall remain standing, the Western Wall is especially dear, as it is the spot closest to the Holy of Holies, the central focus of the Temple.

The Sages prophesied that even after the Temple's destruction, the Divine Presence would never leave the Western Wall, and that the Wall will never be destroyed. The Wall is endowed with everlasting sanctity, as the Talmud says: "And I will make your sanctuaries desolate" (Leviticus 26:31) – this means that the sanctuaries retain their sanctity even when they are desolate.

Jerusalem was destroyed and rebuilt nine times. And through it all, one symbol remained intact: the Western Wall.

In establishing the eternal covenant with Abraham, God promised that the Jewish people will never be destroyed (Genesis 17:7). In this way, the Wall is a symbol of the Jewish people: Just as there have been many efforts to destroy the Wall and yet it remains eternal, so too the Jewish people have outlived its enemies and remain eternal. The Wall thus became the symbol of both devastation and of hope.

As Mark Twain wrote: "...Other peoples have sprung up and held their torch high for a time, but it burned out, and they sit in twilight now, or have vanished. The Jew saw them all, beat them all... All things are mortal but the Jew; all other forces pass, but he remains. What is the secret of his immortality?"

3) Place of Pilgrimage and Tears

Three thousand years ago, King David purchased Mount Moriah and made Jerusalem his capital. His son Solomon built the Holy Temple, and the entire Jewish nation gathered together three times each year on the pilgrimage festivals.

Jerusalem became the focus of the non-Jewish world as well. Ancient maps show Jerusalem at the epicenter of Asia, Europe and Africa. Non-Jews, drawn by a magnetic spiritual power, brought offerings to the Temple. When King Solomon built the Temple, he specifically asked God to heed the prayers of non-Jews who come to the Temple (1-Kings 8:41-43). In the words of the prophet Isaiah, this was "a house of prayer for all nations."

The service in the Holy Temple during the week of Sukkot featured a total of 70 bull offerings, corresponding to each of the 70 nations of the world. In fact, the Talmud says that if the Romans (who destroyed the Temple) would have realized how much benefit they received from the Temple, they never would have destroyed it.

During the 1,900-year exile, Jews would travel to Jerusalem at great expense and danger, just to have the chance to pray at the Wall. In the face of disease, lack of water, and marauding bandits, the Jews refused to abandon Jerusalem. Barred by law or wiped out by Crusaders, the Jews always returned.

The Talmud teaches that when the Temple was destroyed, all the Gates of Heaven were closed, except for one: the Gate of Tears. At the Wall, Jews have always poured their hearts out to God. Thus it became known as the "Wailing Wall" because of the centuries of endless tears, shed by Jews yearning to rebuild Jerusalem.

Three times a day, for thousands of years, Jewish prayers from around the world have been directed toward the Temple Mount. 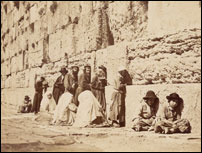 Kabbalistic tradition says that all prayers from around the world ascend to this spot, from where they then ascend to heaven. The Talmud says: "If someone is praying outside the Land of Israel, he should direct his heart in the direction of Israel. When praying within Israel, direct the heart toward Jerusalem. Those in Jerusalem should direct their hearts to the Temple.

Throughout the millennia, Jews from far reaches of the globe have turned in prayer toward Jerusalem. At each Jewish wedding, the groom breaks a glass to commemorate the destruction of the Holy Temple. And we close each Passover Seder with the resonating words – "Next Year in Jerusalem."

As Rabbi Judah HaLevy poignantly said: "I am in the west, but my heart is in the east (Jerusalem)."

5) Built with Love and Dedication

When the Temple was being built, the work was divided among different sectors of the population. The building of the Western Wall fell to the poor, and they worked hard to construct it, as they could not afford to hire laborers to do their work for them.

When the enemy destroyed the Temple, the angels descended from on high and – spreading their wings over the Wall – said: "This Wall, the work of the poor, shall never be destroyed." (from "Legends of the Land of Israel")

When the First and Second Temples were destroyed, and during the Bar Kochba revolt, Israel's heroes fought like lions for every stone of the Temple. When the Maccabees defeated the Syrian-Greeks, the first thing they did was to purify the Temple and light the holy Menorah. This has served as the example of Jewish bravery ever since. 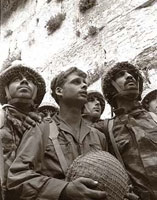 In the 1948 Arab-Israeli war, when the ceasefire lines were drawn, Jerusalem was divided and Jews were once again banished from the Western Wall, permitted only to gaze across the barbed wire from afar... across the endless expanse of time.

In the Six Day War, Israeli paratroopers entered the Old City through the Lion's Gate. "Har Habayit b'Yadeinu!" – came the triumphant cry – "The Temple Mount is in our hands!" Amidst shofar blasts, grown men wept and danced at the Western Wall. After 2,000 years, Jerusalem was finally united under Jewish control, with free access for all.

The Western Wall is no mere historical asset. It is the Jewish root – the deepest roots that any people has. Elsewhere, we grope for insight. At the Western Wall, As we water the Wall with our tears and melted the stones with our kisses, we achieve clarity and define who we are, as God's eternal nation.

Written by Rabbi Shraga Simmons. Based partly on "The Western Wall" (Israeli Ministry of Defense)

A Day at the Western Wall

When God Moved Out
Vayelech 5783: Regret and Repent
Rabbi Sacks: Focus On the Important, Not the Urgent
Put Your Foot Down: Are Human Feet Poorly Designed?
Comments
MOST POPULAR IN Land of Israel
Our privacy policy
Aish.com Is Looking for Great Writers