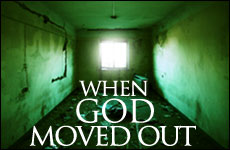 Tisha B'Av and the truth of consequences.

Joan, a once-beautiful, recovering alcoholic, stood up at an AA meeting and told her story:

I married Jeff, my high school sweetheart, and we had two kids. I started drinking when our kids were little, but Jeff had no idea. I used to hide the bottles in very clever hiding places, and I drank vodka, so he never smelled it on my breath.

But then my drinking got worse. Often I couldn't get up in the morning to get the kids off to school because of a hangover, so Jeff found out. He warned me that if I didn't stop, I'd destroy our family. I thought he was just threatening and I didn't listen to him.

My drinking got worse. Jeff told me, over and over again, that he would divorce me if I didn't go on the wagon. But you have to understand that he was crazy about me and always had been, so I knew he'd never do it.

Then, in the middle of the night one night, I woke up from a drunken stupor. I must have been out for a long time, maybe the whole previous day. I looked around and discovered that Jeff and the kids were gone. I mean really gone. They had moved out and taken all their stuff with them. I couldn't believe it. Jeff was always crazy about me. I was sure he'd come back. I was sure until the day the divorce papers arrived by registered mail. Then I knew that I had ruined my life. That's when I started to come to AA.

On Tisha B'Av God walked out on us and took His house with Him.

Tisha B'Av marks the day when God walked out on us, and took His house with Him. Like the husband in this true story, He had warned us, the Jewish people, over and over again. Like the wife in this story, we were convinced that His love for us would keep Him with us forever. We continued to indulge in destructive actions, heedless of their effect on us and on our union with the Almighty.

And then one day – the ninth day of the Hebrew month of Av – God did exactly what He had said He would do. He permitted our enemies to destroy the Holy Temple, which had been the resting place for the Divine Presence in this physical world, and He removed Himself from our lives.

The Jews of ancient Judea had never known life without God in their midst. The Temple of Solomon had dominated their existence for almost 400 years. Daily life in Jerusalem revolved around the Temple service, and even those who resided far away were obligated to make the pilgrimage to the Temple three times a year. Life without the Temple and the Divine immanence it represented was as inconceivable as ... the New York skyline without the World Trade Center.

If we, the Jews of today, cannot muster grief over the calamity of Tisha B'Av, then we can find our point of connection elsewhere: in our same propensity to ignore consequences.

Is it possible to be both smart and foolish?

God created an orderly universe, one of whose principles is that actions produce consequences. Yet the human capacity to ignore consequences is astounding. Witness the person who pays his hard-earned money to buy a packet of cigarettes emblazoned with the warning, in inch-high, bold letters: SMOKING KILLS.

Most smokers are not masochists nurturing a death wish. If you ask them, "Aren't you afraid of getting lung cancer?" they will answer: "Smoking won't kill me. Why, I know a guy who smoked a pack a day and lived to be ninety."

The same denial of consequences pertains when we:

How can Intelligent People Live In Such A Fantasy World, Where No Object Casts A Shadow?

God sent a steady succession of Prophets to ancient Israel to warn them that the consequences of their sins would be defeat, destruction, and exile. Why didn't they listen?

The inner false prophet proclaims: "Do whatever you want, it's okay."

Ethics of the Fathers teaches that a wise person always asks the question: "If I do this, what will happen next?"

Asking this question can save one from much folly and disastrous results.

Failure to contemplate consequences can lead to outcomes as insignificant as gaining a pound, or as significant as a divorce, or as cosmically catastrophic as the destruction of the Holy Temple and the departure of the Divine Presence from our midst.

The metaphor of Joan and Jeff does not totally apply here. On Tisha B'Av God "moved out," but he never divorced the Jewish people. God's Covenant with the Patriarchs promises that, no matter what we do, we will be His people eternally. God will never marry another people.

But even without a divorce, separation is a painful state. Being separated from one's beloved spouse, not living together, not sharing companionship, not enjoying an intimate bond – is that a consequence any wise person would choose?

By the time Joan woke up and went to AA, it was too late to save her marriage. For us Jews, it's never too late to reconcile with our God.

In the Face of So Much Evil, The Only Consolation

Warsaw Ghetto Furniture
Olivia Newton John’s Grandfather was a Nobel-Prize Winning Jewish Physicist
Don’t Believe in Other Gods Versus God is One
Seeing Without Eyes
Comments
MOST POPULAR IN Israel
Our privacy policy
Aish.com Is Looking for Great Writers