A Home for the Soul 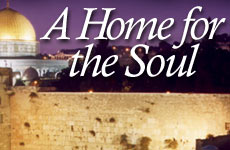 The Temple Mount arouses Jewish passions like no other issue. Here's why.

Discussions over the future of Temple Mount have aroused intense feelings among Jews the world over.

For some, the issue is incredulity that Islam's third holiest site should outweigh the right to retain Judaism's holiest site. For others, it is the challenge to Judaism's profoundest historical memory. For still others, the issue is the violation of an archaeological site that possibly contains the most vivid authentication of Jewish history. And for most everyone else, it is just an intuitive feeling that there is something extremely special about this place.

But then there is another side, which uncomfortably nags us as well. Are a few old rocks worth a war? Do we not look askance at the Serbs and Bosnians that can't stop slaughtering each other on account of centuries-old "historical" and "hallowed" sites? We see them blindly trapped in history, rather than surging forward to a beautiful unencumbered future.

Even at the theological level, we begin to hear some contrary voices: "Judaism is about people, not about things." Or, "Pagans believe in holy rocks and earth; Jews believe in a trans-substantial Divine." Indeed, if Judaism believes in an incorporeal God, shunning icons, paintings and graven images, then why do we cherish this heap of stones?

At the time of the encounter with God at Mount Sinai, the Jewish people were commanded to make a mikdash, "sanctuary," so that God could dwell among them (Exodus 25:8). This portable structure (containing the Ark of the Covenant) traveled with the Jewish people throughout 40 years in the wilderness, and while they were settling the Land of Israel. Then, some 3,000 years ago, King David built an altar on Mount Moriah in Jerusalem (the site of Isaac's binding and Jacob's dream). And on this spot, David's son Solomon built the first Temple -- making the portable mikdash permanent.

The Temple was called Beit HaMikdash, "the Holy House."

The "house" aspect was reinforced in many ways:

Imagine two separate individuals, "A" and "B." Each has his own circle, A and B respectively. Each has an area that intersects and overlaps with the other. The area where they overlap is the "house." It is the area where two distinct entities find their common denominator. Bet is the Hebrew letter whose numerical value is two. Its literal meaning is "house" -- for a house brings together two elements and includes within itself their commonality.

Thus, a home of marriage includes two people of distinct nature and personality. Those character traits that the spouse finds unbearable are left on the outside, and those elements that are common to both are included and accentuated in the home. As the marriage progresses, both sides divest themselves of offensive behavior, and learn more and more to enjoy their common dreams and goals.

How does this relate to God, man, and the Beit HaMikdash?

God and man are as distinct elements as could be. God is the ultimate spiritual essence, devoid of materiality. Man is (at least superficially) physical material, with a seeming lack of much spirituality.

To solve the problem of the gulf between spirituality and materiality, God created a place in the material world that would serve as a house, where Israel and God could unite their commonality, the Divine soul.

This in essence was Jacob's dream. While running away from his brother Esav, Jacob fell asleep on a mountaintop, which tradition says, was Mount Moriah. He dreamt of a ladder, reaching from the heavens down to the very spot where he was sleeping, as angels ascended and descended upon it. He woke up, awestruck, and exclaimed:

The Malbim, a 19th century commentator, remarks on this passage:

Jacob understood that this place was the site of the future Temple... for the Temple is the ladder, whereby heaven and earth kiss each other. Man's worship ascends upward, and the Divine providence descends thereby.

How was the Divine presence manifest in the Temple?

The Talmud (Avot 5:7) states that there were 10 ongoing miracles at the Temple: "No meat rotted, no fly was seen there... the rain did not extinguish the Divine fire, etc." Maimonides states that, in general, miracles are not meant to persist over time. Yet, here was a steady, ongoing set of miracles.

Indeed, the Talmud lists the 10 miracles at the Temple in the same series as the 10 utterances with which the world was created. Just as the world in its completeness encompasses 10 utterances of God, so does the Temple consist of 10 elements, which compose an entire world.

In other words, the Temple is a "parallel" world, physical in substance, but more refined and God-like. It is a world of meat, but the meat does not rot. It is a world of dampness and rain, which does not extinguish the flame of the altar. As the most physical manifestation of Divine spirit, it is as if God has moved into this "house."

Man, on the other hand, must elevate himself in order to enter this house. He must either dedicate himself to Divine service, as do the kohanim (priests), or must be temporarily on an elevated level of spirituality, as the Jewish people achieved during the festivals through purification and offerings. Thus, man enters the Divine house after bringing out in himself the spark of Godliness, the Divine soul.

The Temple is where the human and the Divine include their points of commonality, and where the two can embrace and unify -- if only for a moment.

This is our collective memory of this awesome place.

And we await tantalizingly for the day when both God and man are ready for that communion again.

Looking at the rocks and ruins from this perspective, we see that their value is not merely "historical." Nor, however, are these rocks imbued with magical powers. Rather, they remind us of the time when this place brought out the best and most beautiful in man, and the most fathomable and concrete of God.

The Temple Mount is far above politics of the right or the left. It is a place where God came closest to revealing himself to humanity in a permanent and tangible manner. And it is a place where man reached the peak of his awesome potential. When these two occurred simultaneously, "heaven and earth kissed." Man and Creator, so to speak, embraced.

The essence of Judaism is that we are a nation tied to God, enacting His moral designs, and thereby seeking to bond with Him.

For reasons known only to Him, one tiny plot of land is where God chooses to reveal as much of the Divine as possible, and to elevate man to the highest peak of spirituality humanly possible. As we pray three times a day, we face this point, knowing that this is the spiritual pole of planet earth.

We are not dealing with mere history and remembrances. We are dealing with our most essential present, and our profoundest hope for the future. This is who we are -- our most important place, the very soul of the nation.

Our remembrance of what the Temple Mount once was should evoke in us a pang of yearning and an elevation of self. Yes, the day will come when we will be beckoned "home" again, when God will again be willing to set up a "home for Divine embrace."

And there will be no bloodshed on that day. For on that day, the world will recognize truth and embrace it.

Why Do We Still Mourn11 min read

When God Moved Out5 min read