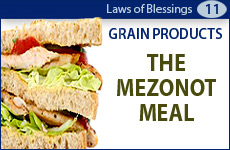 When eaten as meal, cake attains the status of bread and its bracha is Hamotzee.

In our last class, we learned that baked goods are divided into three distinct categories:

Category 1 – Bread, which is made from a baked dough
Category 2 – Pat Haba'ah B'Kisnin – e.g. cake and crackers
Category 3 – Ma'aseh Kedeira, made from cooked grains (like spaghetti and oatmeal)

Now here are some of the most practical rules to know:

But – the bracha on category-2 will depend. When eaten as a snack, the bracha on cake (or any Pat Haba'ah B'Kisnin) is Mezonot, since it is not actually bread. However, when eaten as meal (i.e. in place of bread), that cake attains the status of bread and its bracha is Hamotzee.1 (You would also need to wash Netilat Yadayim before eating this cake, and say the full Grace After Meals.)2

Determining the Amount of Kiday Seudah

Now let's define what it means to "eat cake in place of bread." In other words, how do we differentiate between a snack and a meal?

There are different rabbinic opinions as to when a snack becomes a meal.3 The prevailing opinion is that we judge according to the amount of bread that people normally eat in a meal. If you would eat this corresponding amount of cake/crackers, then the bracha on the cake/crackers is Hamotzee. This amount is called Kiday Seudah – lit: "the amount of a meal."

When eating less than this amount of cake/crackers, it retains the status of Pat Haba'ah B'Kisnin, i.e. a snack, and the bracha is Mezonot.4

When determining this volume, you must take into account whether the cake/crackers is being eaten together with other foods, or if it is being eaten alone: 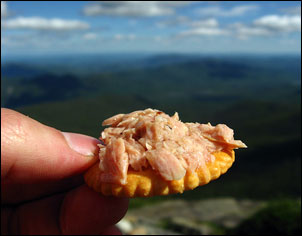 At your nephew's bar mitzvah, they served a delicious kiddush following the services. There were mountains of cake, crackers, gefilte fish, chopped liver, egg salad and cholent. If you plan to fill up on these foods, you should first wash Netilat Yadayim and say Hamotzee on some cake or crackers.

Grain Foods that Never Get "Hamotzee"

Certain grain foods, for one reason or another, will always have the bracha Mezonot, and never Hamotzee. Let's explore these cases:

There are two more interesting cases to discuss:

Now here's a case that sounds counter-intuitive, but if you've learned the rules properly, it will make sense: Imagine that a company produces "matzah crackers," which have the same ingredients, taste and texture as regular matzah, but are in a size and packaging like crackers. Since these are not eaten in place of bread, the bracha is Mezonot.11 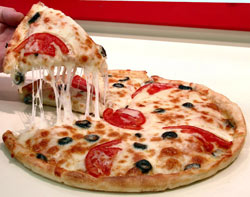 Sometimes, fruit juice is added to pizza dough, giving the dough a very sweet taste. This is a matter of convenience, to allow the pizza to be eaten with the bracha of Mezonot, without the need for Netilat Yadayim. However, be careful: If this pizza is eaten in such a large quantity that it is an actual meal – 2-3 slices – this would qualify as Kiday Seudah, and would require Netilat Yadayim, Hamotzee and Grace After Meals.14

A Change of Plans

There's been a lot of information to absorb in this class. It's a good idea to go back and review everything a few times till it's really clear. But first, here's one last set of rules to consider:

What happens if you change your mind – i.e. you say Mezonot on Pat Haba'ah B'Kisnin with the intention of having a snack, and then, after eating a little, you decide to eat a lot more. The total amount you'll be consuming is Kiday Seudah and would have required Hamotzee. What should you do now? 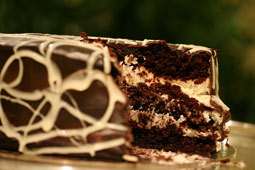 After eating one piece of chocolate triple-layer cake, you decide that you want another few slices. Realizing that three pieces would require Hamotzee, you have to first make a decision: If you plan to eat three more slices, you should now wash and say Hamotzee. But if you can only handle another two pieces, there is no need to say another bracha.

When eating any grain food, it can be confusing to know when different steps are required. Based on what we've learned, the following rules emerge:

The following chart explains the many different situations, and the proper halacha in each case:

Note that if you want to eat less than a k'beitza of bread – and even less than a kezayit – you would wash and say Hamotzee, but without saying the bracha of Netilat Yadayim.16

This concludes class #11 on Hilchot Brachot. In the next lesson, we'll discuss situations when bread loses its regular bracha of Hamotzee.