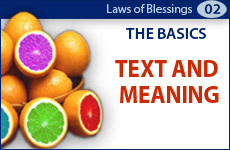 Deconstructing the basic components of a bracha.

In the last class we explored the philosophical meaning of a bracha. In today's lesson we'll begin our discussion of the halachot (laws) – starting with the actual text of brachot.

As we have learned, a bracha is more than a mere "please and thank you"; it is an integral component of our relationship with God. This being the case, if we were to haphazardly express our thanks to God in our own words, any praise would likely be an understatement, like praising a billionaire for one of his dollars! Therefore, the Sages saw fit to formulate a prescribed text for each and every bracha.1

The structure and texts of all brachot were formulated by the Sages of the Great Assembly (Anshei Knesset HaGedola), the authoritative rabbinic body during the Second Temple period.2

The Knesset was made up of spiritual giants, including numerous prophets, all of whom had mastered the entire Torah including the secrets of kabbalah. The brachot they authored were imbued with many layers of meaning, and each word was carefully formulated for its significance and accuracy.

The Sages assigned these texts exclusive halachic validity as brachot (in Hebrew, mat'beya shel bracha). This means that today, we may not alter the prescribed text of a bracha or invent our own bracha; doing so may result in uttering God's name in vain, a prohibition of the Ten Commandments.3

To illustrate, let's look at one of the most common brachot, the one said on bread:

While out on a picnic, you forgot your siddur, but still wanted to say the blessing over bread. Unsure of what to do, you did the best you could from memory. Your bracha went like this:

Although your bracha was missing the words "Ata" and "Eloheinu," it was still valid because the essential components of the bracha remained intact: You began with "Baruch," and included Shem, Malchut, and the message of the bracha.8

Had you omitted the word "Baruch," "Melech," "Ha'Olam," or both names of God, it would have invalidated the bracha and you would need to recite it again properly. Similarly, the bracha would be invalid if its message was altered in a way that makes it unfitting for what the bracha is being made on (i.e. if you'd mentioned fruit, rather than bread).9

These are the general guidelines for mistakes in reciting the text of brachot, as we'll see in more detail in upcoming classes. But since all brachot are built with the same basic structure, it is relatively easy to get used to the standard text and avoid mistakes.

Now that we have learned how to say a bracha, we will move on to a related topic: what to think when saying a bracha.

When we talk about understanding a bracha, there are two distinct issues that must be addressed:

The Meaning of the bracha

As we learned previously, when saying a bracha we are expressing gratitude toward God for something He has given us. Of course, merely reciting words without knowing what they mean can hardly be considered a personal expression of gratitude. It is therefore important to learn the meaning of each bracha. There is, in fact, an opinion that a bracha is invalid if its meaning is not understood by the person saying it.10

Although common practice follows the opinion that any bracha recited in the authentic Hebrew text is valid even if we don't understand its meaning,11 nevertheless all authorities agree that it is proper to comprehend the meaning of the brachot.12

If you are unable to read Hebrew, it is halachically acceptable to recite a bracha in any language that you understand.13

However, when a bracha is translated, it loses the deeper meanings that are implicit in the authentic Hebrew text. As we mentioned above, the brachot were formulated by spiritual giants, who included many layers of meaning in the text. These meanings are typically lost in translation.

Furthermore, when saying a bracha in another language, one must also be careful to make an accurate translation, ensuring that the bracha adheres to the guidelines outlined above.14

A good alternative might be to say the bracha together along with someone else, or to find a transliteration of the Hebrew text.

The Meaning of God's Name

It is important to understand the names of God that appear in the brachot. What do these various names of God mean? Surely God cannot be quantified or defined, because He transcends all boundaries and is outside of the realm of human understanding.15

So how can we address God if He has, by definition, no name that we can fathom?

The answer is that God Himself provided (in the Torah) certain names by which we can refer to Him. These names express our perception of God and how He manifests Himself in the world. For example, when we say that God is "Gibor" ("Strong"), we mean that He performs acts that require – in human terms – strength.16

True, we cannot refer to God's essence, but we can address Him by names which refer to a particular Divine attribute.

The three divine names that are used in the texts of all brachot are:

It is spelled yud-heh-vav and heh, and is known as the Tetragrammaton, because it consists of four letters. Due to the holiness of this name, it is forbidden to read it or even utter its spelling.20

Therefore, it is pronounced as "Adonoy," and when reciting this name, one should have in mind the meaning of both YHVH and "Adonoy" (Name #1 above).21 Common practice is to refer to this name as " Hashem" (literally: the Name),22 or as Yud-Kay.23

Concentrating on the meaning of God's name every time we say a bracha can be a difficult task. One should be careful to do so for at least the first bracha each day. In this way, the brachot that follow throughout the day are connected to the first, and it is as if each utterance of God's name was said with proper intention.24 Of course, we must still try to concentrate on God's name every time it leaves our mouths. By doing so, we will fulfill the halacha to its fullest, and we use the power of brachot to maximize our appreciation of God and our connection to Him. Which, as we've said, is the very purpose of it all.

In our next class, we'll get into more practical applications and learn about what types of foods require a bracha.

There are two significant differences between classic Ashkenazi pronunciation, and Sefardi pronunciation (which is familiar to many as modern spoken Hebrew):

Someone of Ashkenazi descent should pronounce all blessings with the Ashkenazi pronunciation.25

For ease of reference, the class material in this course follows the Sefardi pronunciation that is generally more familiar to beginners. For example, though we write "mezonot," an Ashkenazi should pronounce the blessing as "mezonos."

This course includes audio versions of the blessings, in both Ashkenazi and Sefardi pronunciations. We have also provided printable PDF text of the blessings – with Hebrew, English translations, and transliterations.

There are four basic necessary components to every bracha: