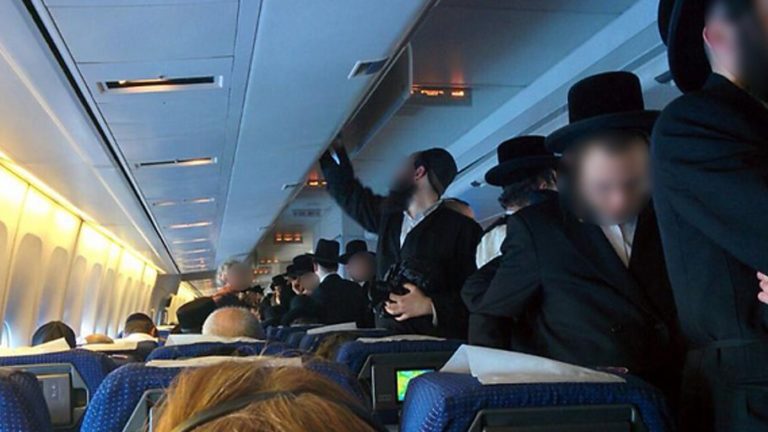 There was no violence, El Al lied to the passengers and refuses to take responsibility. But we did have an amazing Shabbos.

This Shabbos I had the tremendous privilege to be a part of something amazing, beautiful and enlightening. I am hoping El Al will see this and understand that there is a much better headline than the false headline “Haredim Riot On Plane” which I currently see online.

Here is the short of it. Our El Al flight was supposed to leave at 6:30pm. Three members of the crew were late and we started boarding at 8:30pm during which the crew members arrived. At 9:10pm the flight doors were closed and everything was calm for about an hour.

At around 10pm many of the passengers who were concerned about Shabbos starting asking the crew members for detail about departure and no answers were given other than we are leaving in 5 minutes. Keep in mind, that at 10:25pm sitting on a JFK runway, El-AL’s website showed our flight as enroute having departed at 9:30PM.

I was sitting in business class, my seat was directly next to the stairs going to second floor, and 3 rows behind the first class food prep galley. I heard every exchange. At no time was there any physical threat presented by passengers concerned about Shabbos. I am loathe to use the term Chareidim; this was not some Neturei Karta protest full of black clad chasidim spewing nonsense. These were Jews from all walks of life and varied backgrounds who were concerned about Shabbos.

At 11:35pm there were about 40 passengers, myself included, who stood by the exit door and expressed our wishes to disembark from the plane. By this time we were sitting on the tarmac for two and half hours. One of the stewardesses told us that if they take us back to the gate and we get off the plane we would lose our tickets and not be rebooked. I am not sure if she was trying to shock us into sitting or if this was the real policy, but our response was unanimous: every single person said that’s fine, we are okay with that, just take us back to the gate so we don’t violate Shabbos.

At one point, someone whom I later found out to be Rabbi Shalom Ber Sorotzkin got on the intercom and said that he spoke to the pilot, and that the pilot guaranteed we would get to the airport before Shabbos, and that he (Rabbi Sorotzkin) arranged for everyone to have a place and a meal for Shabbos if they did not have time get to where they needed since we would arrive only one hour before Shabbos.

Many of us, myself included, did not sit down and expressed our desire to go back the gate.

At that point the captain came onto the intercom. He told us we were going to go back to the gate as soon as everyone was seated. And we all went back to our seats.

I can’t begin to describe the sinking feeling in my stomach as I saw the plane turn away from the terminals and face the runway. In less than 6 minutes after telling us to return to our seats to go back to the gate, we were in the air.

What a shame… I wish El Al had announced the truth. We were stopping in Athens because El-Al made a series of bad calls, and once they landed they could not depart on Shabbos which is why they needed an non El-Al plane to continue to Israel on Shabbos…

As the minutes crept closer to our arrival into Athens there were discussions on the plane about whether it was halakhically better to stay on the plane or to disembark in Athens. We had no clue what to expect. Would we stay in the airport? Was there a hotel? What would we eat?

When they served breakfast I realized that the packaged egg which they served for breakfast and the half a sandwich I had left from when I boarded the plane could very well be all we had to eat on Shabbos. I even put some nuts into my backpack for Shalosh Seudos (the third meal).

Everyone coming off the plane was united in one thing – We believe in God and His Torah, and Shabbos was our gift and our inheritance and we would keep it. As the first shuttle was full and started towards the airport everyone broke into a song for Shabbos Kodesh.

Once we got to the airport we were met by a woman from El Al who was very sweet and took the time to explain to us that we were would be staying across the street at a hotel and they would take us as soon as the other shuttles arrive.

As they led us into the hotel it was very chaotic. There were four hotel clerks and people started surging towards the front desk. At that point, one Rabbi, whom I later learned was Rabbi Akiva Katz, yelled above the crowd and explained to everyone that we would need to create orderly lines in order not to overwhelm the clerks. He also let us know that they had set aside a place for davening and that Chabad had prepared food. This helped reduce the stress in the room and the process became more orderly as people were focused on getting to their rooms and ready for Shabbos in the 40 minutes we had left to Shkia (the start of Sabbath).

Walking into Kabbalas Shabbos service was beautiful. The room was full of 60 or 70 men and about 10 women and everyone was singing. Rabbi Jesse Horn from Yeshiva Ateres Kohanim led Kabbalas Shabbos. We were all so happy to be able to keep Shabbos, and the davening and level of simcha was very high.

I think we must have danced four or five times during Kabbalas Shabbos and Maariv.

After Kabbalas Shabbos we walked through the hotel to the dining area and what I saw was beyond anything I could have imagined.

85% of the dining area was reserved for our Shabbos meal. The tables were set beautifully with bottles of wine, grape juice and challah rolls. Where the hotel usually displayed its salad bars and assortment of cold meats, was now filled with platters of gefilte fish, 6 or 7 large bowls with a variety of salads and dips, it was as if this had planned for weeks in advance. There was plenty of meat dishes for the main course and an assortment of side dishes to accompany it.

The meal was beautiful and everyone sang songs and niggunim and there were many Divrei Torah.

Shacharis was another beautiful davening and it was interesting to see how it was a mix of Nusach Sefard, Sefardi, Ashkenaz. After davening several people went to the kitchen to help Rabbi and Rebbetzin Hendel (the Chabad Shluchim in Athens) prepare for the meal.

There were also two classes being given, one in Hebrew, and one in English by Rabbi Yossi Baumol.

After the classes we went to the dining room where like the previous night there were copious amounts of delicious food. There were no labels at this meal, we sat in true unity.

I would like to leave off with a few thoughts having just spent one of the most amazing Shabboses of my life.

1. 150+ Jews from all different backgrounds and orientations, wearing every outfit possible walked off a plane with one thought: We will keep Shabbos, even if it means sleeping in an airport.

2. Unlike our great grandparents who were fired if they did not work on Shabbos, or where were ostracized, and possibly incarcerated for keeping Shabbos (in the USSR), how often do we get a chance sacrifice, to be moser nefesh for Shabbos? This was a tremendous gift from God to us that we had the chance to show how much we love God and his Torah, and we ALL took it.

3. Every parent in that hotel who was not able to be home with their children that Shabbos taught their child a lesson that they could not have taught them in a 100 Shabbosim at home. They showed that Shabbos means so much to Mommy, Tatty, Ima, Abba, etc that they would walk off a plane in the middle of a foreign country with no guarantee of food or a place to sleep.

4. Yom Tov in the Beis Hamikdash (Holy Temple, ed.) was probably like this Shabbos. Jews from all over coming together for God and his mitzvos.

May we merit to see Mashiach and the return of the Beis Hamikdash.


With much love, Benjamin Chafetz.

This article originally appeared on israelnationalnews.com

Why I Left Germany

Transforming the Pain of Tisha B’Av to Active Responsibility
Olivia Newton John’s Grandfather was a Nobel-Prize Winning Jewish Physicist
Don’t Believe in Other Gods Versus God is One
Seeing Without Eyes
Comments
MOST POPULAR IN Israel
Our privacy policy
Aish.com Is Looking for Great Writers