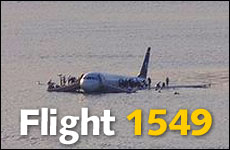 There are three great stories in the averted disaster of US Airways Flight 1549.

First is the story of Divine Providence, which placed a pilot with precisely the right training, experience, and temperament at the helm of the crippled jetliner and the only feasible landing strip -- the Hudson River -- close enough at hand for a safe, if chilly, touchdown.

Second is the story of heroism. The pilot, Chesley Sullenberger, drew upon his experience with both military fighters and gliders to bring the passenger plane safely down from the sky. The flight crew quickly and efficiently instructed the people to prepare for impact and then hastened them off the sinking plane. The rescuers, both professional and private citizens, steered their craft to the crash site within minutes. Not one life was lost.

But the third story is that of the passengers. For the most part untrained and unprepared, without exception the passengers on Flight 1549 did precisely what they needed to do in order to survive.

In moments of crisis, bold leaders act decisively, heroes rise to the occasion and show their true colors, and acts of selflessness inspire those of us thousands of miles away who find our faith -- in both Divine mercy and in our fellow man -- renewed.

But heroes cannot succeed in a vacuum. Had the passengers on the stricken plane responded with panic, had they stormed the cockpit in a frenzied attempt to seize the controls, had they ignored the directions of the captain and the flight attendants, had they fought one another to reach the emergency exits first, then this story would have a much less happy ending.

The sages of the Talmud teach: "In a place where there are no leaders, strive to become a leader." On the surface, this means precisely what it appears to mean. It is leaders who impose the unity and direction that constitutes the difference between a community and a mob, between order and chaos, between a chance for survival and self-destructive pandemonium. Where there is no one to take charge, every individual must see himself as a potential leader and do all he can to shoulder the responsibilities of leadership.

At the same time, the sages tell us that this principle applies only in a place where there are no leaders. Wherever there is someone qualified and willing to lead, then it becomes the responsibility of others to follow, to become good soldiers and carry out orders. It was the passengers of Flight 1549 who enabled the heroes of the story to perform heroically.

When the plane is going down, we're motivated to set aside our egos and stand together for the sake of our own survival.

Perhaps the exultation we feel over the survival of Flight 1549 stems from a deeper, often subconscious conviction in the unity of mankind. We can transform ourselves from a divided rabble into a society of leaders and followers, of captains and foot soldiers. We can achieve great things when we come together in a common cause for the common welfare.

Nothing catalyzes us like crisis. When the ship is sinking, when the plane is going down, when the enemy is at the gates, we find ourselves motivated to set aside our egos and our petty differences and stand together for the sake of our own survival.

Perhaps this is the most relevant lesson of Flight 1549. At a moment in history when the world has become less predictable than ever, when unstable nations like Iran and North Korea are on the brink of acquiring nuclear weapons, when terrorists strike against our most beloved kinsmen without reason or pretext, when enemies at our borders would rather suffer self-destruction than make peace, when the world economy teeters on the brink of collapse and our leaders spin like weather vanes grasping for solutions -- what better time to reflect upon our potential to come together in the most hopeless moments, as when a hundred thousand tons of steel is falling out of sky, as when all human society seems ready to fall back into the dark ages, and change the outcome, against all odds, from tragedy to triumph.

With common purpose, we can accomplish virtually anything, as our ancestors did, when they stood before the Creator 3300 years ago and received their instructions and their mission, as one man, with one heart.

Travis Rudolph and How Small Acts Can Make a Huge Difference

I Am No Nazi
Big OnThe Little Things
Chraime Egg Boil
Is Grease the Word?
Comments