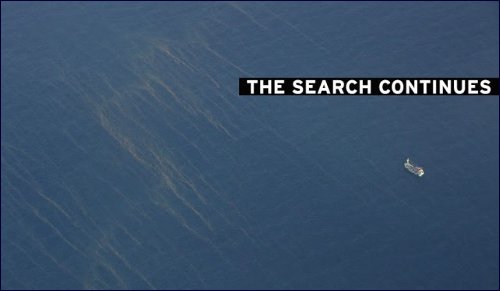 The agony of not knowing.

Days after its disappearance, nearly three dozen airplanes and 40 ships from ten countries were still searching an area hundreds of miles long for the missing Malaysia Airlines Flight 370.

Time and again, authorities felt they’d found clues to the jetliner’s fate – only to be proved mistaken. Rescuers who thought they’d spotted a life raft floating in the Gulf of Thailand found the object was the lid of a large box. An airplane door turned out to be moss-covered debris, what authorities thought might be an airplane tail was on closer inspection corded logs; an oil slick near Malaysia was found not to contain any jet fuel.

Theories as to what happened to the missing airplane abound. The airliner made no distress call, and since its disappearance no radar signals from the plane have been detected. Investigations are focusing on the possibility of terrorism: two passengers on the missing flight were travelling on stolen passports, and both purchased their tickets in Thailand through an Iranian intermediary. In the absence of any evidence, however, authorities are also considering pilot error, a catastrophic mechanical failure, and hijacking.

Meanwhile, relatives of the 239 missing passengers waited for news – any news – as to their loved ones fate. As reporters and family and friends of the passengers gathered in Beijing, one woman waiting for word about her loved ones screamed “Why won’t anyone tell us anything?” before collapsing in tears.

When I read of that poor woman’s words, my thoughts raced to my grandmother and a question I asked her before she died. She and my grandfather escaped from Vienna just before World War II; my father was born in the United States three years later. How, I wondered, did they choose a name for my father? Who was he named after? I’ll always remember my grandmother’s reaction. She was usually a collected, undemonstrative woman, but on this occasion she became very upset. “I didn’t know whom to name him after!” she nearly shouted. “I had no idea who was still alive!”

My grandmother suspected the truth, she told me, but all through the war – and for many years afterwards – still held out hope that somehow, miraculously, her friends and family were still alive. She could never completely relax, she confided, while she was still unsure of her loved ones’ fates.

As bad as circumstances might be, not knowing the truth can be much more stressful. As Jewish sages have said, "There is no joy like the resolution of doubts." During hearings at the International Criminal Tribunal for the Former Yugoslavia, one psychologist summed up this type of emotional agony for the loved ones of people who were killed in the conflict there: “even the worst truth would be better for them than this uncertainty, this constant, perpetual uncertainty as to what happened to their loved ones, because they keep waiting, they’re waiting for something. They cannot begin life, they cannot face up with the reality of the death of a missing person.”

As we wait for news of the missing airliner, it might seem there are few practical ways we can help. But Jewish tradition gives us guidance in how to respond during difficult times, and ways to help ease others’ pain. Here are five ways to reach out and help during this crisis.

And in case you're thinking, what does this have to do with me? Watch this powerful video about saving Syrian children. Its main message is: Just because it isn't happening here, doesn't mean it's not happening.

NICU
Who Was Josephus? The Controversial Backstory of the Famed Historian
Should I Break Up, Get Engaged or Keep Dating?
Time Is Your Precious Commodity
Comments
MOST POPULAR IN Current Issues
Our privacy policy