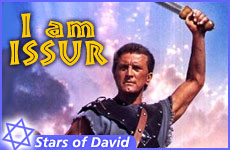 Kirk Douglas stood up for Israel and the Jewish people. That's what makes him a “Star of David.”

The “Stars of David” section will tell the “I’m Spartacus!” stories throughout the year to give recognition to those people of conviction and courage and to inspire others to stand up for the Jewish People and Israel during these trying times.

Say this to most Americans over the age of 50, and you’ll see a little shiver, and a fleeting flash of shame.

“Are you now or have you ever been a member of the Communist Party of the United States?" was the infamous question that paralyzed Hollywood from the late 1940s to 1960. Not because celluloid city was a cauldron of “reds” spying on audiences with listening devices in 15 cent popcorn buckets. But because of its connection to McCarthyism, named for Red Menace demagogue, Senator Joseph McCarthy, who liked his hooch stirred and his victims shaken. Playing off hysteria that the cold war would turn “hot,” he built fear, as Americans built bomb shelters and drilled schoolchildren to jump under wooden desks.

McCarthy and his cohorts focused on flushing out Commies. Hollywood, with its Jewish, liberal bent, was ripe. Unconstitutional questioning turned into “naming names,” turning in friends. Civil liberties were stripped to innuendo, mistakes, lack of evidence. Taking the First or Fifth Amendment meant you were a “red.” America lost its conscience and failing to play had a consequence: Annihilation of your career; your life.

Over 300 were vilified. Since Jews were American film, we were hit hardest: from Danny Kaye to Edward G. Robinson. Big names eventually came back, something not so easy for writers forced to go abroad or to use pseudonyms. One of the first 10 (known as the Hollywood Ten) to refuse to answer was writer Dalton Trumby, who even won an Oscar writing as “Sam Johnson.”

The divide and conquer strategy worked in a terror-ridden town, caught between their own bomb shelters, or the possibility of waiting tables at Schraffts, as the witch hunts grew rabidly paranoid under McCarthy’s watchful (or wonky) eye, that saw red all around .

1960: The chiseled and talented Kirk Douglas was having a run that would make our A-listers gasp in awe. Issur Danielovitch, born December 10, 1916, to uneducated Russian (now Belarus)-Jewish parents, Herschel "Harry" Danielovitch and Bryna, settled with the family (Issur and six sisters) in Amsterdam, New York. His character honed by poverty, a loving mama who was a natural storyteller, his Jewishness and scars from being ridiculed as a Jew.

He had to get out of there. He worked his way through St. Lawrence University and got a special scholarship to The American Academy of Dramatics (1941). He did it all: singing telegraph boy to waiting tables at Schraffts. At the Academy he met fellow Jew, Lauren Bacall, and his first wife.

During WWII, he was in the Navy. Following injuries in 1944, he was medically discharged with the rank of lieutenant (j.g.).

With Bacall’s help, he got the lead, then raves in The Strange Love of Martha Ivers. In 1948, he made his first of seven films with “other tough guy” Burt Lancaster. Three years after stepping on a sound stage, he was in Oscar territory for his gripping performance as an opportunistic boxer in Champion (1949), The Bad and the Beautiful, about blacklisting (1952), and as Vincent van Gogh in Lust for Life. He’d made it out.

My kids never had the advantage I had. I was born poor. – Kirk Douglas

In 1955, he formed one of Hollywood's first independent film companies, Bryna, (named after his mother), and managed by second wife Anne, whom he married in 1954. Not thrilled with the dying studio system, he could make the films he wanted, including Paths of Glory, The Vikings, Lonely are the Brave and the film that would forever change Hollywood history.

It’s 1960, and producer/actor Kirk Douglas had a piece of the sky. Fame, talent, praise, riches, and four sons. All he need do was keep doing what he was doing, and close the vault.

Instead, he opened it – and broke the back of the black list. He hired Dalton Trumbo, the most “notorious” of the Hollywood Ten, to write the screenplay for Spartacus. What pseudonym would they use on the credits? Director Stanley Kubrik volunteered. Douglas thought, “Enough!” And Spartacus was written by..... Dalton Trumbo who cried, when he finally re-claimed his name.

The blacklist did. President-elect, JFK, saw the film. It was officially over, but unofficially, many remained scarred. Thirty years later, Douglas was formally recognized for this extraordinary risk. “I Am Spartacus!” became iconic.

But ... there was a “part” he felt he hadn’t played. The merging of Issur the Jew, and Kirk, the Hollywood cardinal.

There it is, again and again, in the thousands of pages. His relationship to Judaism, especially when parts of his sky fell. His tragic helicopter accident (1991) in which he alone survived, his 1996 stroke, the loss of son Eric in 2004. We also learn of his second Bar Mitzvah at 83, his continued study; his wife’s conversion. His best-selling books starting with the autobiographical, The Ragman’s Son, the couple’s unstinting generosity toward Israel, Jews, all people – seniors, Alzheimer patients, and children alike. His humanitarianism, as well as film awards are staggering.

“We were very poor -- but my mother said, ‘A beggar must give something to another beggar who is worse off than he.’ And that has stuck with me.” – Kirk Douglas

Long before the crash and his second Bar Mitzvah, Kirk Douglas's behavior was shaped by his Jewish sensibilities: freedom, compassion, empathy, morality, family, justice, brotherhood, learning, Tzedakah have been his leitmotif.

Last year, Douglas crafted what many thought impossible: at 92, following his stroke a one-man autobiographical show “Before I Forget.” After his final performance, son Michael presented him with an ice cream cone.

An intensely meaningful gesture because more than 85 years earlier, young Issur “debuted” in a kindergarten play. His father, Harry, usually distant, attended. After, without a word, he bought his son an ice cream cone. That “review” meant more to him than any Oscar could. Not unlike sweets to celebrate the first day of cheder (Jewish school), that simple cone symbolized the sweetness of success, triumph, and 3,300 years of struggle, risk, and survival. And 85 years later Issur’s son returned the favor, placing another link in the chain.

And whether he knew it or not, Issur was always a part of that chain. By the time Issur Danielovitch was a child, he had already tasted the sourness of injustice. He had learned that being a Jew would forever require the decision to either lose himself in the crowd – or make moral, Jewish choices. Even if some are messy or risky and can turn you from a Hollywood star back to a Hollywood waiter.

No doubt all of these choices contributed to the character of a man who is not only one of our “Stars of David,” but one who can say… who would say …