Pita bread might be one of the most misunderstood foods. This delicious flatbread - often round and with a pocket in the middle - is popular worldwide. Greeks claim it as their own: after all, the modern name “pita” comes from Greece. Pita is a staple of Israeli cuisine, found in virtually every restaurant, supermarket, falafel store and home in the country. It’s also popular today across much of the Arab world; at times, Israel has even been accused of “appropriating” this iconic bread. Yet pita is a relatively recent invention, and has long been considered a Jewish food, invented and popularized by Jewish cooks.

Here are 4 little-known facts about pita’s surprising Jewish origins, and don’t miss the recipe to try making pita at home.

Unlike some other types of bread, pita is quick to prepare: made of a simple dough, pita is traditionally baked in a very hot oven and is ready within minutes. The earliest record of someone baking this type of bread comes from 4,000 years ago, when it describes how our ancestor Abraham prepared a quickly-baked bread called pat for his guests.

After three angels disguised as men appeared to Abraham, Abraham jumped up and ordered his servants to bring water so his guests could wash, then told his entire household to prepare a feast. Before the lavish meal was ready, Abraham told his guests “I will fetch a morsel of bread (pat in Hebrew) so that you may sustain yourselves….” first (Genesis 18:5). Given that Abraham later asks his wife Sarah to prepare more time-consuming pastries, it seems that the pat he whipped up for his guests in minutes resembled modern-day pita.

The Torah mentions pat again in the Book of Ruth. Boaz, a wealthy landlord, invites his impoverished relative Ruth to join in the communal meal that he and his entire household are sharing during the busy harvest season. Meals during this season were presumably hastily made; again, the Torah uses the word pat to denote this type of bread: “At mealtime, Boaz said to her, ‘Come over here and partake of the pat, and dip your morsel into the chometz (a type of dip’” (Ruth 2:14). The Jewish bread pat was possibly the first pita.

Even though the word pita is commonly considered Greek in origin, the great food historian Rabbi Gil Marks noted that Greek cooks only began using the term in the Renaissance - and likely were introduced to pita by Sephardic Jews who fled to Greece from Spain after 1492.

“When Sephardim arrived in (the Greek city of) Salonika in large numbers after 1492, the word pita had not yet appeared in the Greek language,” Rabbi Marks observed. The newly transplanted Salonika Jews began calling the thinner, quickly made breads popular in the eastern Mediterranean pita to differentiate them from the thicker bread loaves they were accustomed to eating in Spain. The word caught on and spread throughout Greece then Turkey as a name for round, hastily baked pocket bread. “In Salonika, where from 1519 until the early twentieth century Jews constituted the overwhelming majority of the population, it was only natural that the word spread to non-Jews and then throughout Greece.” The term also influenced the Neapolitan word for pizza, and was soon applied to a range of pastries in Greece, not just flat pocket bread. (Quoted in Encyclopedia of Jewish Food by Gil Marks: 2010).

Quickly baked flatbreads have long been popular throughout the eastern Mediterranean region, but it seems that pita bread as we know it - a round flat bread with an air pocket in the middle - is a more recent invention, and was brought to the Land of Israel by Jewish immigrants in the 1880s.

Food historian Charles Perry notes the myriad accounts of the Land of Israel in the mid-1800s make no mention of oven-baked breads with an air pocket in the middle. “I am inclined to agree that it (pocket bread) is relatively recent. I find no reference to pocket bread in Medieval Arab cookbooks…. People like to think that the popular foods of a region are of great antiquity. But one thing food history teaches is that cookery, like most cultural phenomena, is subject to fashion,” he notes (Quoted in Jews and Their Foodways, Studies in Contemporary Jewry Vol. 18 by Anat Hellman. Oxford University Press: 2015).

In the modern State of Israel, pita soon became a ubiquitous national food, served at virtually every meal, eaten as an accompaniment to Israeli favorites such as humus, falafel and Israeli salad. In the 1964 World’s Fair in New York, pita was displayed to an unfamiliar audience as “Israeli bread”.

Gyros Sandwiches are a Jewish Invention

As Israeli pita gained popularity, other cuisines adapted their own flatbreads to make them more pita-like. One notable change was in Greek and Turkish pita, which today is widely recognized as a wrap for meat in the popular Greek and Turkish dish gyros, somewhat similar to Israeli shawarma. Rather than being an ancient invention, Greek and Turkish cooks were influenced by Jewish cooks to create this dish just a few decades ago.

Wrapping grilled souvlaki meat in a pocketless flatbread was long a classic Greek and Turkish dish. But “gyros are an American innovation” notes Rabbi Gill Marks. “Before the 1970s, Greek and Turkish restaurants in America only served the pocketless type of pita. Yet since then, most Americans have come to associate pita with pocket bread. Jews were responsible for this change of meaning,” Rabbi Marks observes.

Pita continues to gain popularity. In the United States, consumers bought over $131 million worth of pita in 2021. In Israel, the popular Jerusalem Angel Bakery bakes at least 10,000 pita loaves each day.

Baking pita at home - Get the recipe and make your own fresh pocket pita. 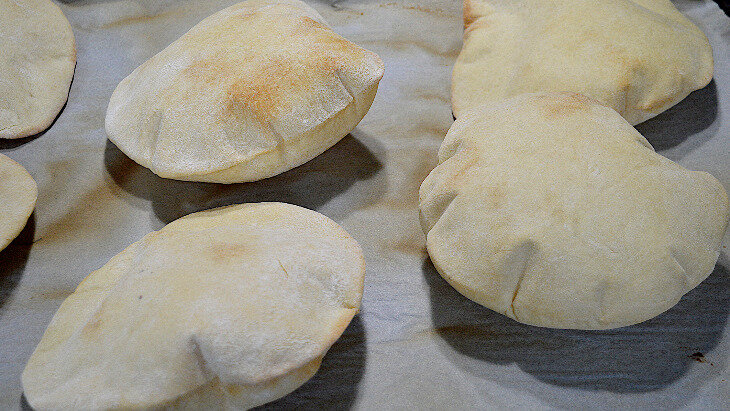 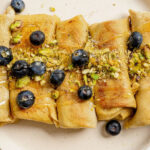 What Are Blintzes and Why Are They Jewish?3 min read 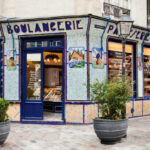 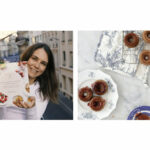 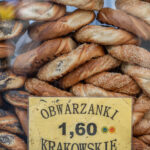 Bagels, The Ghetto, and Yom Kippur: A Journey into the Bagel’s History5 min read 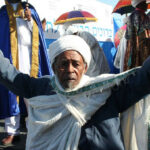