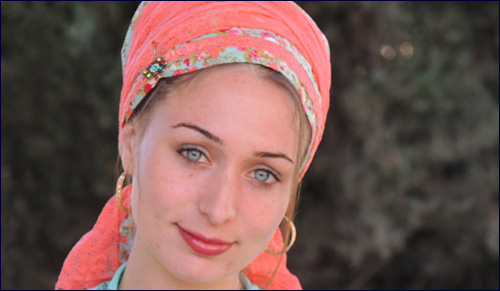 The shmata on my head is a statement as bold as my red curls: I am proud to be a Jew.

I grew up in a home that was deeply Jewishly identified – active in our synagogue and community – though we didn’t keep a traditionally observant household. Becoming a rabbi was one of professional options in the back of my head; after all, Jewishness was the most significant part of my identity and self-understanding. (Except maybe being a redhead.)

Sometime around the end of college, I started reading more about Jewish thought and practice. Over a period of several years, I added more traditional observance to my life, weighing carefully what rituals appealed to me and which didn’t. Eventually, much to my surprise, I fell completely off the deep end and embraced a lifestyle guided fully by Jewish law. There were plenty of aspects that didn’t appeal to me, but I had made a decision that one cannot embrace the system piecemeal or the system falls apart. And then, there was that aspect of Law: It doesn’t get applied based on what you like or don’t.

One of the aspects I most struggled with was the requirement that women cover their hair after marriage. (See above: Redhead.) I didn’t care whether I had to wear a full-on hijab (we don’t do that) or one of those little lace beanies some women wore to temple when I was growing up, I like my hair and I don’t like covering it.

It’s now been quite a few years since my hair has seen the sky, and, until recently, I still disliked covering it about as much as the very first day I had to do it.

My relatives and close friends all reacted differently as I became more observant. Some of them were more accepting of it than others (and some thought my heretofore-considered-impressive brain had fallen out of my head completely). I didn’t blame them: The reality is that someone close to you becoming observant does affect you. No longer could I easily eat in their homes, or go to the restaurant of their choice. No longer could I participate in family events on a Friday night or Saturday without an army of logistics. Working out weekend visits got complicated, and I now celebrated holidays some had never heard of. To this day, one relative insists that I made up Shemini Atzeret. There was no mixed dancing at my wedding, and I don’t think anyone fully expected that so many dudes with big beards would be around.

And then the next morning, a hat. And one every day since.

My wild, crazy, gorgeous red curls was now stuffed under a hat.

The thing I got more comments and compliments on than anything else—my wild, crazy, gorgeous red curls—was now stuffed under a hat. A lot of Jewish women cover their hair with wigs just as beautiful as their own hair, but I associate that with a community that is not mine, and it just never made sense to me to cover my hair with hair.

So I’ve tried about four million ways of covering it. Hats big and small, berets of every size and shape, scarves, snoods (which mortified my teenaged kids, even though I thought they were cute and sassy in an Andrews Sisters kind of way), and even—on rare occasion—a wig.

I wore a wig to my first job interviews in the U.S. because I didn’t want Being A Jew to be the first thing potential employers and colleagues noticed about me. In Israel, it wasn’t as big of a deal because there are lots of people—Jews of all flavors, Muslims, even some monks—running around Jerusalem with one sort of a head covering or another.

At my first job, the wig lasted two days. Though I felt conspicuous walking around in a hat, I decided I didn’t care. So people might think I was “artistic,” a die-hard “Blossom” devotee, or maybe even undergoing chemo. What did I care?

Since then, the wigs get pulled out only for Purim costumes.

I have friends of mine who really love this particular mitzvah (I am talking about you, Andrea), and plenty of friends who love their fancy wigs or fun hats. Not me.

I like the idea that my hat is a tangible symbol of being the female head of my household, and I really like that I don’t have to try to tame the mass of curls on Shabbat morning. (Curly haired folks who need to wet their hair completely understand what I mean…) This particular mitzvah. though, is not my thing. I do get the pleasure or knowing that I get plenty of cosmic merit for doing a mitzvah that’s hard for me, unlike, say, refraining from eating clams or scallops, which I always thought were gross anyway.

So I disliked it. Until recently. 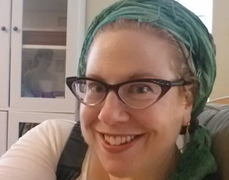 The author covering her red hair

One of the myriad ways I cover is with a big headwrap most often associated with a segment of Israel’s national religious world (see the beautiful and holy mothers of the three teenaged boys whose kidnappings and murders touched off this latest Gaza war). Of late, I’ve been choosing this, even though it takes much longer than throwing on a beret. And requires skills and dexterity I don’t really possess. And sometimes I end up looking like some sort of wacked out High Priestess.

With the shmata on my head, I’m clearly not emulating Bella Abzug. I’m not Bohemian or quirkily stylish. I’m not eccentric.

My husband is an Ivy League-educated academic with a professorial beard. He dresses and looks like the average dad who shops at Lands’ End. And yet, several times a month, strangers come up to him, say, “Shalom” and tell him that their grandfather walked to synagogue every week. Other observant Jews ask him where to get a kosher sandwich at a conference or what time afternoon prayers are. And whenever he drives poorly, I remind him (lovingly, gently, ever-so-patiently) that his kippa identifies him as a Jew and he better not do anything that makes the rest of us look bad.

I have a relative who winces every time she sees me in one of my headwraps. She doesn’t love the whole hair-covering thing period, but in a beret she can at least restrain herself from wincing. And I get it: I look different.

If I wore a wig like my neighbors, I’d look like any other soccer mom (except that I am wearing slightly longer clothes than average). I’d blend in. When I walked down the street, no one would take a second glance at me – the whole reason I wanted to wear a wig when I worked downtown.

But as the world has once again begun—angrily and openly—belching out anti-Semitism, it’s comforting to me to Look Like a Jew.

Lots of that anti-Semitism is called criticism of Israel’s policies. Uh-huh. And that’s why Jewish communities all across Europe are encouraging their members to not dress in a way that is identifiably Jewish. Individual Jews have been attacked, and Jewish owned businesses have been torched. One French synagogue was very nearly the site of a pogrom by a mob of “anti-Israel protesters.” German “protesters” yell “Death to the Jews” and the hashtag “Hitlerwasright” trends on twitter, presumably by other “protesters.” A kid on the Temple University campus — my grandfather’s and father’s alma mater — was sucker-punched for having the temerity to approach a “Students for Justice in Palestine” table.

What are these “protesters” protesting? The fact that my father-in-law escaped Hitler’s clutches and now has a bunch of delicious grandchildren? Apparently.

As of yet, boys walking down the street in yarmulkes aren’t being punched in the face by folks “protesting” the continued existence of the Jewish people. Not in my neighborhood at least.

The shmata on my head is a statement, as bold and big as my red curls still are: I am proud to be a Jew.

But those punches are aimed just as much at me as they are at Jews in Europe, the same way that the rockets in Gaza are aimed at my children as much as they’re aimed at Jews in Israel. (We’re all Israeli citizens – just not living there at the moment.)

Maybe someday I’ll have to worry about whether sending my son out with a kippa on is too “provocative” for this neighborhood. Maybe someday I’ll worry if the American police and military can—will—protect me from hordes of rampaging “protesters.”

Hopefully, we’ll move home to Israel soon. And hopefully it won’t come to being a move of necessity.

Until then, the shmata on my head is a statement, as bold and big as my red curls still are: I am a Jew. I am proud to be a Jew. I live my life on Jewish terms, and I am way more concerned with looking and dressing the way I believe God wants me to look than I am with your opinions. Friend or foe.

“God is with me. I will not fear. What can man do?” the Psalmist asks.

And in the meantime, I will look like a High Priestess. Deal with it.

What Saved You, Saved Us

#Human: A Story from Bergen-Belsen

Moments of Choice, Lives of Greatness Part I

Revealing The Soul of an Artist

One Drink Too Many: My Journey of Breaking Free from Alcohol
Lessons from the Book of Jonah
Where Are We? The Body, Brain, Soul Problem
Dr. Sheila Nazarian’s Escape from Iran
Comments
MOST POPULAR IN Spirituality
Our privacy policy
Aish.com Is Looking for Great Writers