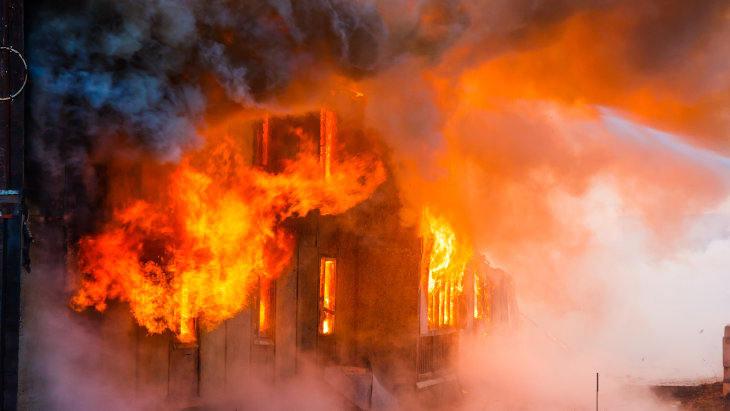 I lost most of my possessions, but gained so much more.

It was 4 PM on the hottest day of the year in New Jersey. I had just fallen asleep on the couch after an enjoyable Shabbos meal with friends, exhausted from the 15-minute walk home in the heat.

I was in the middle of a vivid dream when suddenly a noise jolted me awake. I heard a loud alarm crying out. My thoughts raced but I didn't panic. This must be a false alarm.

I got increasingly nervous as I walked through the dining room, down the hallway and turned the corner. The ringing got louder and more intense as I made my way closer to my bedroom door. My roommates were away for Shabbos; I was all alone.

I turned the door handle and saw a thick black cloud of smoke encasing my bedroom. That's when panic set in. For a second I was paralyzed in a stream of thoughts: Am I still dreaming? How do I wake up? Is this real? Are all my possessions being consumed by fire? Should I try to rescue anything? What's worth trying to recover?

Life! Life is worth recovering! My “fight or flight” system kicked in to high gear as my heart raced and blood pumped quickly through my veins. I reached down to try to grab one item off the floor but the smoke choked my lungs.

Run! Get help. Save the rest of the house.

The final flames were extinguished just as Shabbos ended, and so was my sense of security and stability.

A short while later as I watched the firemen try to dampen the fire, my fears burned like the flames that continued for hours. The final flames were extinguished just as Shabbos ended, and so was my sense of security and stability.

My rabbi advised the day after the fire not to ask the questions right away. Why? What does this mean? Contemplation and reflection would come, he said.

I said a special blessing during the Shabbos after the fire thanking God for saving me from a dangerous situation. How was I able to thank God for something that caused me so much pain? How could I be grateful for being home-less and losing all of my possessions? How could I have gratitude for the trauma I suffered? How could I accept that going through so much suffering was “good” for me and coming from a loving Creator?

I could have been sleeping in the bedroom where the fire began instead of the couch in the living room (which I had contemplated doing before I grabbed a pillow from my room and landed instead on the couch). My roommate and I could have decided to continue to wait another week to borrow the ladder to reach up to the smoke detector to replace the batteries that were dead. Others could have been in the building and been harmed. I could have tried to rescue my things and been trapped...

But apparently God had a bigger plan for me. I spent that Rosh Hashanah with my parents who drove to New York from Chicago to be with me. It was the first Rosh Hashanah in over six years that I prayed with my parents in the same synagogue. It was the first time since I had rediscovered my Jewish faith and spent close to a year in Jerusalem, three weeks at Aish haTorah's Jewel program and then nine months in a seminary. In the aftermath of the fire, questions arose in me. How will I recover from this? What do I do now? Why did this happen to me? Will I ever regain my sense of security? What is really important in life?

The lessons and values I had gained through my study of Torah prepared me to tackle many of these questions. That Rosh Hashanah I sat in synagogue and I contemplated the events of my life, I reflected on the events of the fire, and I praised God for sparing my life.

My time in Israel put me on course towards a more purposeful life. The fire taught me how to be a receiver, something that I was never comfortable with. I learned to appreciate the support from friends, family and the Jewish community on a much greater magnitude. I learned that physical possessions, although they do hold importance and sentiment, can never share the same value as states of being: connection, love, happiness, fulfillment, gratitude, purpose. And I learned to be incredibly thankful to God.

Last year it was determined that I would be in a fire and endure great suffering, but my life would be spared. It could have been determined differently for me.

Rosh Hashanah is a time to crown God and recognize His Kingship. On Rosh Hashanah our fate for the year is written and later sealed. We read in the machzor that it will be determined who live and who will die – who by water and who by fire, who by sword and who by beast... As I read these words the magnitude struck me. I was overcome with emotion and gratitude realizing that last year it was determined that I would be in a fire and endure great suffering, but my life would be spared. It could have been determined differently for me.

Months passed after the fire and thank God I slowly rebuilt, with significant help from the Jewish community at large who graciously offered their homes, food, clothes, supplies, money, and continued support. I will always be indebted for these significant acts of kindness and hope to one day pay them forward. At the end of January I returned to Israel on the Aish Destiny trip, a women’s retreat to reconnect, rejuvenate and revitalize. It did just that and more. 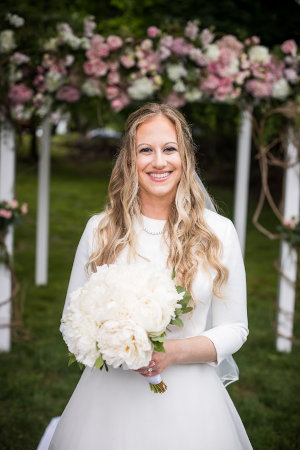 The author at her wedding

While in Israel, I met my now husband. I had been searching and praying for many years to find my bashert (soulmate) and my prayers were finally answered. Could this have happened if I had not endured certain events and grown in specific ways earlier in the year? Would I be at this same place I am now if I had not been guided on a specific path in life and through my various trials and tribulations? Were my prayers that Rosh Hashanah heard?

We don’t always understand why bad or difficult things happen. There is so much confusion, suffering, and uncertainty. But we are not in full control. There is a greater power, a Source, a Creator that has painted a picture for every one of us. We do not always see the picture clearly, but sometimes we do get a glimmer of light illuminating it for a split second. It is hard to understand when we are left in the dark. But we should not lose sight of the fact that there is a plan and it is ultimately good, we just do not see the full tapestry yet.

This Rosh Hashanah take the time to reflect on your past, give thanks, pray for the upcoming year, and recognize the magnitude of the day and the power it can hold.

May we all have our prayers answered and revealed to us quickly.

The Bodyguard at My Door

I Believe in You: Inspiring Rosh Hashanah Message
Were Adam and Eve Jewish?
How I Learned to Love the Multiverse
10 Big Jewish Inventions
Comments