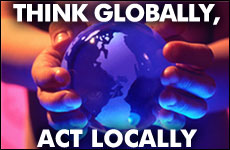 Despite my sincere desire to save the world, I never managed to move past rhetoric and idealism to meaningful action. Then I started learning about Judaism.

When I was a college student, I was certain that whatever I would be doing in the world, it would be something big -- involving nationwide policies, or (this was my real dream) influencing and ultimately bringing peace and justice to the whole entire world.

In my sophomore year, the U.S. Ambassador to the United Nations who had graduated from my college, came to address the student body. I don't remember a thing he said. I only remember how he represented the fulfillment of my highest possible aspiration -- that one day I would also return to stand behind that same podium as a person who had succeeded in making the world a much better place.

To this end, I majored in Russian and Government, and dreamed of working for the Foreign Service and climbing my way up into the upper echelons of international policy makers and shakers. I dreamed of introducing democracy to Eastern Europe, and bringing peace and understanding between all nations.

In the end, as you might have suspected, my life has followed a very different path from the one I had envisioned for myself.

My life as a stay-home mother is not only not big -- it is absolutely microscopic. My life centers not around shaping countries, regions, or even cities, but rather around my four young daughters, and watching them grow, ever so slowly, into infinitesimally more grown up human beings.

Considering my change of life-path, is has been refreshing to learn that Judaism sees no contradiction between living a life that the world considers small, and making a big difference in the world. This is because the good deeds we perform in our families and local communities ultimately have a beneficial effect on the world as a whole.

Judaism taught me that in addition to worrying about AIDs orphans in Africa, I should donate canned goods every week to feed orphans in my community.

My own life experience has taught me the wisdom of the Jewish "Think Globally, Act Locally" approach. Looking back, I now realize that in my student years, despite my sincere desire to save the world, I never managed to move past rhetoric and idealism to meaningful action.

PREPARING FOR THE HIGH HOLIDAYS

This think-global, act-local approach has also, in recent years, revolutionized my approach to preparing for the High Holidays.

For the first few years after I became religious in my junior year of college, I had a hard time with the soul-searching required in preparation for the High Holidays. The concept of "REPENTANCE" loomed so theoretical and large above me that I gave up on soul-searching as quickly as I would an equally well-intentioned effort to swallow a watermelon whole.

This all changed when several years back I learned from the teachings of our Ethical Masters to break down REPENTANCE (just as I had SOCIAL JUSTICE) into bite-sized pieces.

This means that for the past few years my pre-Jewish New Year resolutions have included only two small good deeds that I would like to focus on during the days leading up to Yom Kippur -- one mitzvah that involves how I treat other people, and one mitzvah that relates to how I serve God.

Last year, for example, I decided to say one blessing a day with total concentration (yes, only one).

While this probably sounds insignificant, Judaism teaches us that each tiny mitzvah we do naturally leads to many other good deeds, like a metropolis of dominos flattened by a flick of your index finger.

"THE ONE PERCENT SOLUTION"

This Elul, I have been trying to implement another Jewish "Think Globally, Act Locally" approach called "The One Percent Solution" that I heard about from Rabbi Dovid Gross.

Whatever good deeds we are already doing, do them now with one percent more focus, interest and care.

This approach suggests that whatever good deeds we are already doing, do them now with one percent more focus, interest and care.

So for the past few weeks, as I care for my children, speak with my neighbors, answer the phone, and go about my day, I have been trying to do everything one percent better.

This past Wednesday, for example, when my chronically-ill neighbor stopped by when I was rushing out to a wedding, my gut instinct was to make a run for it. But this time, I tried to be one percent better, so I took five minutes to chat with her, and even managed to make her laugh a little bit.

This past Shabbat, during a celebratory meal for newly married friends, my gut instinct was to sit and shmooze with the other guests. But I tried to be one percent better, so I got up to help my hosts clean up in the kitchen, enabling them to return to the table in time for dessert.

Yesterday morning, after a sleepless night with a sick baby, my gut instinct was to growl at my daughters who asked me to switch their braids into ponytails. But I tried to be one percent better, so I sent them off to school with ponytails and smiles on their faces.

By dedicating ourselves to the daily, unglamorous grind of becoming kinder and more giving people, we can become more like God, collectively creating thousands of small waves that slowly but surely raise the global water level for all of humanity.

Today, 15 years after the UN ambassador set my heart aflutter, I still have deep admiration for the people who leave everything behind to establish medical clinics in Malawi, or work-training programs for the homeless in Calcutta.

What has changed is that today I have developed profound admiration, as well, for my fellow Jews who toil tirelessly behind the scenes to feed a hungry neighbor, comfort a sick relative, and befriend a lonely widow -- the kind of humble, forgotten heroes who generally only receive recognition from the ones who benefit from their kindness, and the One Who sees all.

I Believe in You: Inspiring Rosh Hashanah Message

Eli Whitney's Rosh Hashanah Resolution
Faith: the Axis Upon Which the Wheel of Science Turns
Love - Not Just About Chemicals Anymore!
Is There a Moral Code in a Virtual World?
Comments
MOST POPULAR IN Spirituality
Our privacy policy