My Name is Elizabeth and I am Jewish 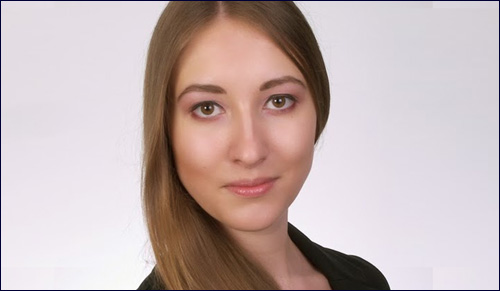 Growing up in the Ukraine, Judaism was closed off to me. But I refused to hide my identity.

I am privileged to teach all types of people in Krakow; Jews, non-Jews, old, young, those who knew they were Jewish all their lives and those who just found out and are re-connecting to the Jewish world. One of my students, Eliza Schwartzman, has a remarkable story which I would like to share with you.

Ever since I was a child I knew I was Jewish; I also knew I could never reveal my Jewish identity.

It’s hard to believe that in the 21st century a Jew still has to hide their Jewishness, but that is exactly what I went through growing up in Dnepopetrovsk, Ukraine over the last 20 years. Yes, officially, there is Jewish life in Ukraine, and yes thousands of Jews live and attend Synagogues and Jewish cultural centers in my hometown. But tens of thousands still fear the repercussions of revealing to the outside world that they are Jewish. My story is one of these and only when I moved to Krakow, Poland was I able to understand how crazy my situation was that in this day and age I was forbidden to tell anyone my secret. What happened in Krakow? That is for the happy ending of this sad tale, and I will speak about it later. 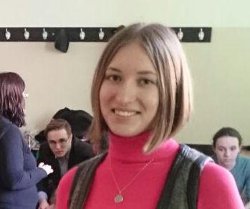 My first memory of Judaism was very positive. I felt special, I was proud. I was 6 years old and I knew I was part of this special club and I just wanted to let everyone know. So on the first day of school when the teacher asked every child to introduce themselves and say something interesting about themselves (I have a pony, I like ice cream, I am left-handed…), with a big smile on my face I stood up and said, "I AM JEWISH!"

I followed my father’s orders and never mentioned I was Jewish to my friends again.

My teacher’s face soured, the exercise ended immediately and we were all told to go to our seats and open our textbooks.

That night my parents sat me down and told me how disappointed they were to receive a phone call from the principal complaining of my ‘bad behavior.’ I didn’t understand at the time (I’m not sure I understand today as a women of 22), but I followed my father’s orders and never mentioned it to my friends again.

Until I was 14 – when I had my first love. His name was Dmitri* and we were in love together. We spent so much time having fun, going out, and cherishing each other. I was convinced that Dmitri was my one true love so I cautiously revealed to him my secret – I am a Jew. Dmitri thought nothing of it until that evening when he told his parents.

The next day I called but no answer. I sent emails but no response. Finally I confronted him in his home – where I had been countless times – and cried out to him, ’what happened?’ His response sends shivers down my spine to this day.

“Never talk to me again Eliza. You are disgusting, your people are evil, I wish you were dead.”

I didn’t understand, I don’t understand. How was I different? Did he have any idea what a Jew was? I had no idea and I was Jewish! How could he? How did he say he loved me yesterday and he hated me today? I was (am) so confused.

I would not hide my identity; I would embrace it.

I was crushed but not destroyed. I couldn’t explain it but I would not let that hate defeat me. I would not hide my identity; I would embrace it! I decided to change my name! Because my father was so nervous about anti-Semitism, instead of giving me his name, Shvartsman, as my surname, which was customary, he had me adopt my mother’s surname so as to hide my Jewishness. In Ukraine when a child turns 16 they have the chance to choose their original name – I became Yelyzaveta (Eliza) Shvartsman and I proudly showed my identity card to my father.

He was shocked – but deep down I believe he was proud. I still did not know what Judaism was about. My father said he would never take me to synagogue, never celebrate the holidays and never have anything Jewish in the house. Except one day, which I found out was Passover, he gave in and finally brought me to the synagogue. It was amazing. I was so happy to see my heritage. I asked a million questions to understand what the service was about and what the holiday meant to the Jewish people. After that, perhaps because of my growing interest in Jewish traditions or other reasons, he never took me to the synagogue again.

Fear, hate, terror – these words hovered over my father with a name like Shvartsman and he honestly thought he was doing what was best for me by closing off Judaism to me forever. He decided to send me for schooling to where he thought would be the last place a Jew could live openly and learn about Judaism – the graveyard of the Jewish people, the ghost of European Jewry’s past – Krakow, Poland.

And he was right. For the first three years of my schooling there I saw no Jews, encountered no synagogues and just focused on my studies. Something was gnawing at me that there must be some Judaism but I was under strict order to not engage. I obeyed – until ten months ago, a day which changed my life forever.

I knew only one thing about Judaism in Krakow – that every year there was a Jewish culture festival. I wasn’t sure there were any Jews but every summer at the university my friends would go and volunteer at this festival for ten days in July. They were called Machers – I didn’t know why.

The festival was started by a non-Jew 25 years ago in an attempt to resuscitate Jewish culture in Krakow, a city in which Jewish life flourished for close to a millennium. It became wildly successful and a symbol of what has been taking place in Krakow in particular, and Poland in general over the last years since it became an independent democratic state. There has been a deep curiosity about Judaism and a willingness to showcase Jewish culture in festivals, museums, theater, and studies. Ten years ago, the Institute for Jewish Studies department of the major Jagiellonian University opened and today there are 150 students! And that Jewish festival now boasts 25,000 visitors every summer.

I decided to become a volunteer – a macher – and as part of our training we were told we would have a meeting with a rabbi in the Jewish Community Center, in Krakow. I had never met a rabbi before so I was excited and nervous. The rabbi seemed nice and spoke about what it means to be Jewish and how we could help out people and talk to them about Jewish culture throughout the festival. Then he finished with one more line… 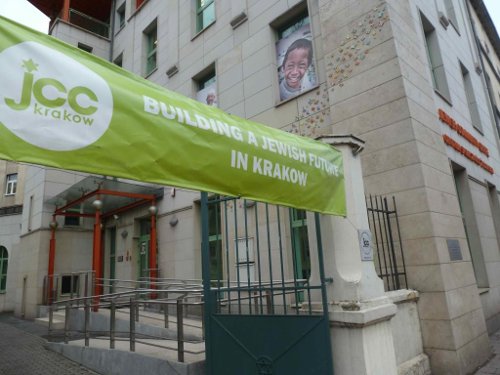 “Krakow is experiencing a re-birth of Jewish life and particularly here at the JCC where Jewish life is thriving. If you have a Jewish mother or father, grandmother or grandmother, you could not only be a volunteer but are welcome to join the Jewish community. Just meet me after this talk and I can help you come back to your heritage”.

“Wow. Did he just say there is Jewish life in Krakow?” I thought. Could I really become part of the Jewish community? I went home and looked for my documents, my Jewish identity, my card with my Jewish name and the next day I went to the JCC at 9 in the morning to wait for the rabbi and ask to join the Jewish world.

The rabbi was late! He was praying at synagogue, I was told, so I waited nervously and finally we met and he invited me immediately for Shabbat dinner. 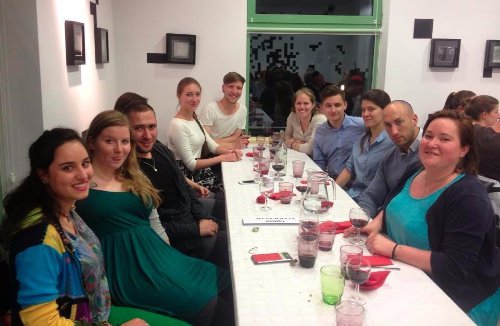 Since that day I have not stopped learning. I want to know everything about what it means to be a Jew. I want to try every holiday, every commandment and experience all that had been denied to me in Dnepropetrovsk. 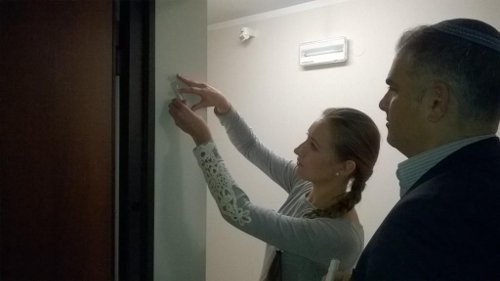 I study Hebrew on Wednesdays and go to Shabbat dinners on Friday nights. I joined the students’ club and met young adults my age. Each day is a new wonder. I study with the rabbi four times a week and I am entranced by the Bible and Jewish law. Last week I observed Shabbat for the first time and it was thrilling!

Last week I observed Shabbat for the first time and it was thrilling.

I was asked what the experience for me has been like and my response is that Judaism for me in Ukraine was like seeing a world in black and white; in Krakow I see everything in majestic, beautiful color. I am so grateful to God for giving me the opportunity to return to the Jewish world and I am grateful to the JCC for being this amazing place of openness and exploration. 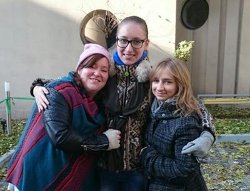 I hesitantly told my father about my choice to be engaged, to become an active member of Jewish community. Despite everything, he allowed me to make my own choice, but told me to be careful. It is hard to change stereotypes; to change what you believe about others is difficult but to change what you think about yourself is, I believe, even more complicated. I am convinced that he will ultimately come around and see how happy I am and how it really is safe to be openly Jewish in Poland today.

Today I proudly say something I only dreamed about for most of my life:

Hi. My name is Elizabeth and I am Jewish.

Rabbi Avi Baumol is serving the Jewish community of Krakow as it undergoes a revitalization as part of a resurgence of Jewish awareness in Poland. He is also the Emissary of Shavei Israel in Krakow, Poland. He graduated Yeshiva University and Bernard Revel Graduate School with an MA in Medieval Jewish History. He is a musmach of RIETS and studied at Yeshivat Har Etzion in Alon Shevut. He served as a rabbi in Vancouver British Columbia for five years. Rabbi Baumol is the author of "The Poetry of Prayer" Gefen Publishing, 2010.

My Search for Answers to the Big Questions

God, Why Are You Doing This to Me?