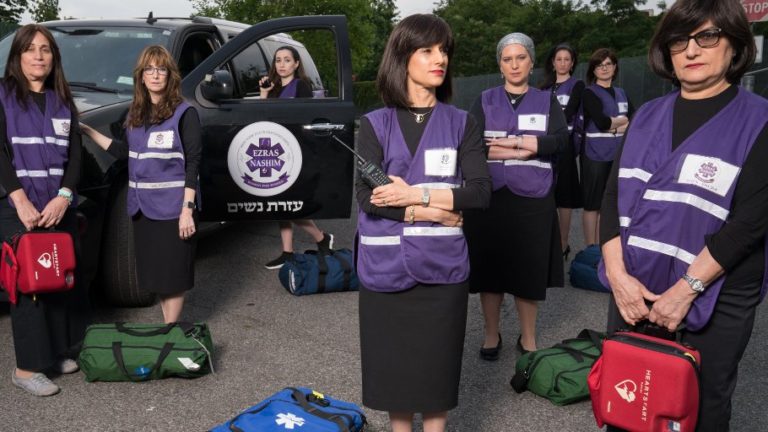 “The worst thing to tell me is that I can’t do something because I’m a woman and I’m a religious woman,” explains Ruchi Freier in a new documentary about her trailblazing work establishing the first all-women’s emergency medical response team in her neighborhood of Borough Park, New York.

The title of the documentary, 93Queen, references the dispatch code given to Ezras Nashim, the women’s EMS corps staffed by all Hasidic women. It is the first film for director Paula Eiselt, who is Orthodox but not Hasidic, showing a dynamism and creative energy that is usually not associated with the Hasidic community.

Freier herself was never discouraged from thinking outside the box. At the age of 40, already the mother of six children, she became one of the first Hasidic women in Brooklyn to earn a law degree and open a practice. In the past year, she has gained fame as the first Hasidic woman elected as a judge in Brooklyn, where she serves in a criminal court. 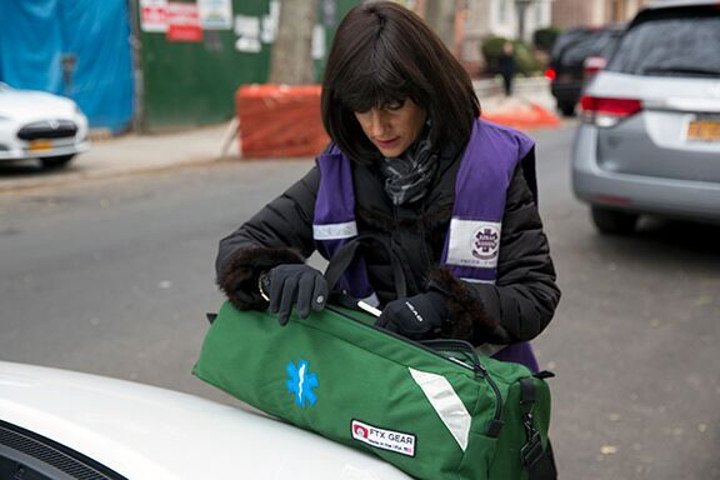 Ruchi Freier on the job

Freier had an uphill battle to establish Ezras Nashim in Borough Park, where the all-male Hatzolah was first established in 1969. Back then, the average response time for emergency medical services through 911 was 30 minutes. Brooklyn’s Hatzolah, which boasts a response time of only a few minutes, fields about 50 calls a day. Hatzolah’s dozens of local groups have made it the largest volunteer ambulance corps in the world. But many of the calls are from women, some in labor, and many would prefer to be treated by other women, particularly in cases related to labor.

“How can we expect women who have never held hands with anyone other than her husband suddenly cope with 10 men seeing her exposed from the waist down?” asked Hadassah Ellis, one of the Ezras Nashim volunteers. “No woman should ever be too embarrassed to call for help.”

In 2011, Freier decided that it was time for women to be able to choose to be treated in a medical emergency by other women. Brooklyn’s Hatzolah did not want to absorb a women’s division. They were equally adamant in opposing a competing EMS division run by women.

“They think that women aren’t fast enough, strong enough or smart enough (for this work). I think we are.”

“They think that women aren’t fast enough, strong enough or smart enough (for this work). I think we are,” Freier told an assembly of women in an early-stage meeting about creating Ezras Nashim. But not all Hasidic women were convinced.

The concept of tzniut, or modesty, runs at a high bar in this community. To some, the idea of women working as emergency responders smacked of a secular, feminist agenda.

While most of the opposition came from men, and Freier is a committed, religious woman, she wouldn’t back down. “If you can’t join them, beat them,” she quipped at an EMS convention in New York, as she and her mother shopped for defibrillators, oxygen tanks and stethoscopes. 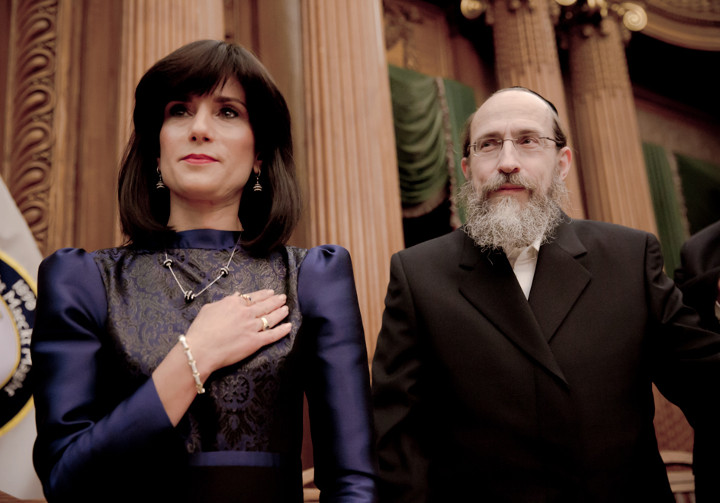 Tzvi Dovid Freier, Ruchi Freier’s husband, was fully supportive. “Some men told me that I wouldn’t be able to survive (if this succeeded.)” Seated next to him during the interview, Ruchie Freier simply laughed.

The film highlights the fine line Freier had to walk. She is a committed Hasidic woman whose freezer is filled with home-baked challah and who sets her oven to start at 3:30 to cook the dinner she prepares early in the morning before work. On the other hand, she is also a woman who refuses to accept a status quo that she feels unfairly constrains women’s choices.

“If I were a Hasidic man I wouldn’t have half the problems that I have, but I’m not afraid,” Freier said. “I believe we have God’s endorsement, and we move on.” In one scene, a black EMT tells Freier and other members that just as blacks have had to work twice as hard to succeed, so would they.

Still trying to earn the respect of her community, Freier and Yitty Mandel appeared on a Jewish radio program, explaining, “If you have a life filled with Torah values, you don’t need feminism. We have nothing against women going to men doctors, but the women should have a chance.”

On the first day when Ezras Nashim was “live,” dispatchers were excited for their first calls, but for hours, they only received prank calls from men. Finally, a real call came in from a woman in labor, and Ruchie Freier grabbed her bags and slid into her car, racing to the scene.

For Freier, who had long dreamed of becoming a judge, Ezras Nashim proved a catalyst. She believed that as a judge, her reputation could only help solidify support for the organization she founded. Toward the end of the film, we see Freier campaigning in her EMT vest and stethoscope. 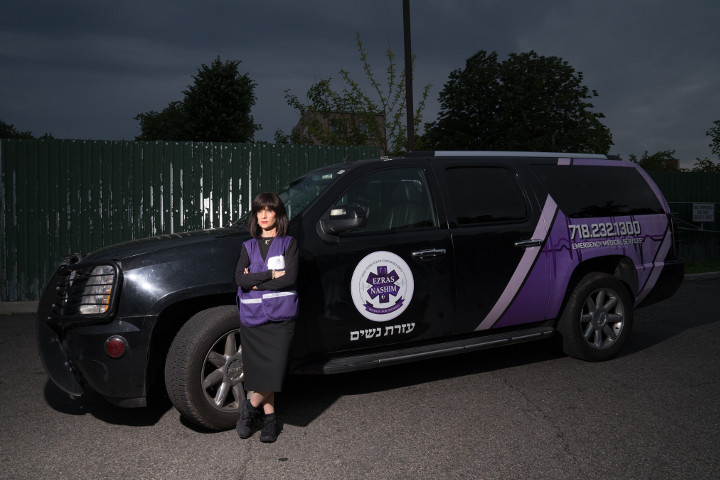 “I have reached a watershed moment in my life,” she said in the robing ceremony in court. “I value my fellow EMTs for their unwavering support. We created the first ever all-female EMT service in Borough Park. You helped me prove that Hasidic women can do great things.”

In 2017, only three years after Ezras Nashim launched, the organization won both the New York State and New York City Basic Life Support Agency of the Year award.

Response to the Documentary

Both Freier and director Paula Eiselt have been thrilled, and a little stunned, at the fantastic reception to the film since it opened a few weeks ago in New York. There are sold-out crowds every night, and people stay for the question-and-answer periods. Jews from all backgrounds are coming to the screenings, asking questions, saying thank you for showing hasidic women in a new light. Even Hasidic men, including Hatzolah members who normally shun movie theaters, are coming to see 93Queen.

Eiselt also had to fight to make this documentary. At first, potential funders could not see the value in a film about a population they assumed was politically regressive. After PBS offered funding, other sponsors followed, and the project won a significant cash prize in the prestigious Hot Docs pitch forum in Toronto.

Eiselt told Aish.com that she made this film “to put another viewpoint out there about Hasidic women. They are diverse, complex human beings like everyone else. This film gives them a voice. The nuance and complexity are resonating.”

Judge Ruchi Freier also told Aish.com, “Hasidic women are often seen as subjugated, oppressed, lacking opportunities. This is an inside view of what they are really like and I believe it is a Kiddush Hashem. And while we still have a long way to go in gaining full acceptance, we’ve come a long way.”

When asked if she still works as a responder with Ezras Nashim since she is now a court judge, she simply said, “Of course!”

93Queen will play in New York City through August 9, followed by screenings in Los Angeles and then rolling out across the U.S, Canada and Israel. Please visit www.93Queen.com for more information on cities, dates and showtimes.

Superman vs. the Nazis: How Comics Influenced American Public Opinion
Is Grease the Word?
Dried Fruit Compote
Scientific Curiosity and the Divine Encounter
Comments
MOST POPULAR IN Jewlarious
Our privacy policy
Aish.com Is Looking for Great Writers