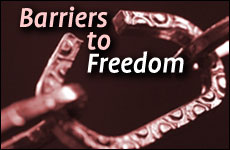 Freedom from physical slavery is the first exodus. Then comes freedom from psychological enslavement. Passover shows us how to break lose from our mental chains.

During the 30 days leading up to Passover, it is customary to prepare ourselves both physically and spiritually for the holiday. Physically, by cleaning our homes of leavening, and spiritually, by reviewing the themes and laws of the holiday.

Each festival in the Hebrew calendar has a theme with a opportunity for personal growth. Passover is called, "the time of our freedom." Let's explore what freedom really means.

The redemption of the Jewish people from slavery in Egypt was a two-step process. First was the physical redemption; second came the spiritual redemption. When we were physically enslaved to Pharaoh, our time was not ours. We had no ability to make choices related to the physical direction of our lives.

BOUND TO THE PAST

But even when we become physically free, a slave mentality can remain which binds us to our past and prevents us from achieving our physical and spiritual potential as free people.

Maimonides' version of the Haggadah states:

Maimonides is teaching us that had Pharaoh agreed freely to let the Jewish people go (rather than because God took us out with His outstretched arm), then it would be possible for us to be physically free -- but even today we would still be meshubadim, beholden to Pharaoh. There would have been an emotional link of gratitude to Pharaoh that would have prevented us from making a psychologically clean break from Egypt, and from becoming spiritually free to fulfill our potential.

FREE FROM THE NAZIS

In our own time we can see this scenario. My father spent three years hiding in Holland from the tyranny of the Nazis. Through an amazing series of miracles, he and his family survived the war. In May, 1945, he received his physical freedom and came out of hiding after 1,000 days.

Many survivors remained "enslaved" to their Holocaust experiences. Not my father. Fortunately, I did not grow up with "child of survivor's syndrome." Quite to the contrary, my father saw his physical freedom as an opportunity for personal growth and change. Nothing from his past was going to hold him back from achieving his potential. He moved from Holland to Canada after the war and learned how to speak English without a trace of an accent. He married and raised two children. He ran a successful store and took his father and brothers into the business. Later in his life he got involved in numismatics, and became both a noted author and leader in the field. Still he found time to volunteer helping stroke victims and the aged.

From observing him, it seemed clear to me that achieving one's potential meant being responsible to your own values and responsible to others. When my wife and I decided to make aliyah, I asked my father how he felt. He said, "You have no control over where you are born. Yet each person has to find his own place in life."

I understood him in the physical and spiritual sense.

This, too, is the message of Passover.

As the holiday approaches, let us all ask ourselves: What am I a slave to that is holding me back from achieving my potential? Am I a slave to my desires? The place I live? My profession?

Those things that are holding us back are the real "leavening" (chametz) that need to be removed from our lives, so that this Passover will be the life-transforming event it is meant to be.

It Ain't Over 'Til It's Passover

The Fragility of Freedom

The Freedom of Simplicity
Faith: the Axis Upon Which the Wheel of Science Turns
Love - Not Just About Chemicals Anymore!
Is There a Moral Code in a Virtual World?
Comments
MOST POPULAR IN Passover
Our privacy policy