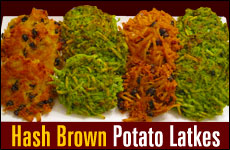 Hash brown potatoes are basically shredded potatoes that can be found in the refrigerated or freezer section of your grocery store. These were so popular last year that a representative from one of the brands that I recommended, Simply Potatoes, called me to thank me because sales in our area had gone up! Now although freshly grated potatoes are always best, the Hash Brown Potato Latkes are a very close second! Here are variations to share with your hungry family!

Note: These are great for the GFE (Gluten Free Eater) too! Simply substitute 1/3 cup of potato starch for the 1/3 cup flour in the recipe. 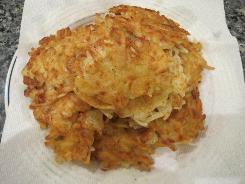 In a large bowl mix all ingredients until thoroughly combined. In a large skillet, heat oil. Drop large spoonfuls of potato mixture into the oil and fry until golden brown on both sides. Serve warm with apple sauce or sour cream.

Prepare the original recipe with the following add-ins: 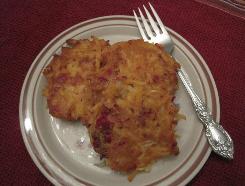 This recipe is great for Shabbat Chanuka!! The guys in the family will LOVE it – really!!! 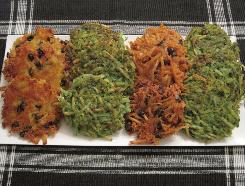 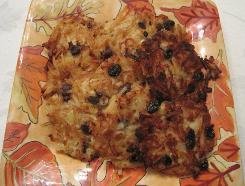 Toss the apples with the lemon juice, sugar and cinnamon, then add the mixture and the raisins to the Original Classic Hash Brown Potato Latke recipe. Prepare as directed above.

Sharon Matten lives in Chicago and is a Freelance Pastry Chef, Kosher Food Writer & Blogger, Cable TV guest Chef, Wilton Cake Instructor, Cookbook Contributing Editor, Electrical Engineer, Wife & Mom (not in order of importance!). She writes the weekly www.koshereveryday.com blog about cooking kosher with a family and busy life – pictures and recipes included! To get more great recipes, and to find out more information about Sharon Matten go to www.koshereveryday.com.

4 Steps to the Perfect Latke