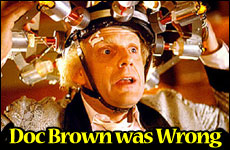 After re-watching Back to the Future, I realized that we actually can change our future.

Doc Brown, the memorable mad scientist played by Christopher Lloyd in the 80's classic, Back to the Future, was a pretty smart guy. He invented a time machine. He figured out how to get Marty back to the future. He found out how to get things back the way they were supposed to be.

But there is something Doc just couldn't figure out. Something only a high schooler could teach him.

Doc is constantly screaming at Marty that they can't do anything to change the past. Or the future.

Throughout the first Back to the Future, Doc is constantly screaming at Marty that they can't do anything to change the past. Or the future. That any action, any deviation that challenges what currently exists, would rip the whole universe apart.

There's only one problem. Doc dies in the future. And Marty just can't accept it. He will do anything to save his friend. Even destroy the ever so fragile “space-time continuum.”

There are lots of Docs in the world. People that think the world is set in stone -- that it just goes on in circles, and never changes. That any attempt we make to change the world, or ourselves is misguided tomfoolery. Even worse, that it could damage the world.

Like Doc, these people will have no problem admitting that the world is messed up. In fact, that is just about all they do. Like Doc, they run around waving their arms and screaming (or commenting angrily on blogs, websites and news sites), without accomplishing much.

True, it is possible to mess things up. Look what Marty did to his present after he tried to buy a book from the future that would help him make millions betting on sporting events that he already knew the results of. His whole world fell apart. His father died. Doc Brown was committed to an institution. And his mother was married to an evil man. It almost seemed like it was better that the time machine had never been invented.

And this is often the argument the ones against change will make. What the voice in our head that is telling us to stop is telling us. “Don't take risks! Don't follow your dreams, don't fix the world, don't take action!”

But what that voice is really saying is what Doc ends up screaming at the end of the movie: “I refuse to accept the responsibility!” That’s right -- changing the world means accepting responsibility -- where what we do has an effect, maybe good, maybe bad. But until we accept that responsibility, the world will continue to be just... mediocre.

Marty refused to listen to Doc, as much as he loved him. Because to Marty, the most important thing was creating a world that was meant to exist. A world where his parents were successful and happily married instead of losers. Where his best friend didn't die an early death. Where he had a sweet ride.

The world, the space-time continuum, is tissue paper ready to be torn and re-taped. With each piece of tape that we put back on, the world is moving closer to perfection. Further from the world of Doc, of sitting and observing, and closer to the world of Marty, of action, life and vibrancy.

In other words, we're meant to mess the world up. Because that's the only way to fix it.

Miral: Is This the Face of Terror?