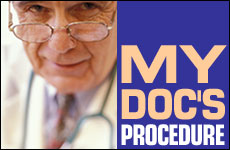 One small tumor. If He can make it, surely He can break it.

Doctors are fascinating people -- and not only because they hold death in one hand and life in the other. They're just different from us -- like F. Scott Fitzgerald characterized the rich. Different because they're the ultimate specialists, totally devoted to their profession.

My doctor, who specializes in plumbing problems (to flatter him I call him a hydrologist), is no exception. He's a great healer, but his social skills rank with those of the Komodo dragon; his bedside manner would wake a vampire patient in mid-day. I think his father may have been an undertaker. Let's just say a charmer, he's not.

But skillful and resourceful he is, which is why I'm letting him do a "procedure" -- God forbid we should say operation -- on a sensitive part of my anatomy. The water tank, let's call it. We've done it before; removal of small tumors that invade the water tank. No problem. You remove them before they rust the tank, and all is well.

So, we do the "procedure." (Procedure, a bland word that denies pain, complications, risk, and danger. A procedure: like an IRS audit is a social engagement.) It's over and the doc fusses with his apparatus and I do the same, putting myself back together. As soon as I see he's disarmed himself, laying down his sharp, silvery weapons, I ask, "So, Doc, what do you think?" He's fiddling with some apparatus I can't see. No answer.

"So, Doc, what do you think?" I repeat. He knows what I want to hear and what I don't want to hear. But he continues folding up his equipments and I notice he's avoiding looking me full in the face. Uh oh.

"Well, let's wait for the path report." He means the lab analysis.

I need some help. And I'm not thinking of pills or supplements or a lo-carb diet or a personal trainer.

Not good, I'm thinking on the way home. I need some help. And I'm not thinking of pills or supplements or a lo-carb diet or a personal trainer. My need goes far beyond such earthly means. And I'm looking skyward as I reflect back on the doctor's words (more his manner than his words) and that path report -- a full week away. An old Afro-American spiritual pops into my mind:

Didn't you deliver Jonah
from the belly of a whale and then
free Daniel from the Lion's den
with the strength of prayer?
So, the Good Book do declare.

Timing is everything. It's only a week or two past the High Holy days. If only I had known of this potential problem then, I would have included the cure of a small, non-invasive tumor in my fervent prayers, at the peak of their strength because of my holiday zeal. But wait a minute -- He must have known. And surely He has the power to predict that I would have included their elimination on my wish list. I feel better already.

But just to play it safe, I asked for His intervention. And even told several of my well-connected, observant friends of my plight. Couldn't hurt -- they might have more currency in that golden bank than me -- more markers to call in.

One small tumor -- a minor challenge to He who both caused and then cured the leprosy of Miriam. A great analogy, I'm thinking. His design of my body, in some mysterious way that we still don't understand, nurtured that tumor. And if He can make it, surely He can break it.

So I prayed. My friends and family prayed. Had the Holy Temple been in existence, I would have jumped on a discounted flight to Jerusalem, bought a fat, non-discounted sheep in the Temple courtyard, and let the Cohanim roast him to a turn on the altar. There are no atheists in foxholes (as we said in World War II) or in operating rooms. I just didn't like the way my doc looked away from me.

Due to my powers of imagination, it was a long week. Needless to say, we surfed over all the medical series on TV. Anything with a doctor we skipped. Then, a week later in the middle of Everybody Loves Raymond (sometimes I suspect that my wife likes Raymond better than me), the phone rings. It's my own personal Komodo dragon -- my highly specialized, socially stilted doctor. It's benign, he tells me. No problem.

Whatta way with words! How skillful in communication -- with the verbal nuances of a professional diplomat. He should represent us at the UN. Doc's golden tongue would get that Iranian Devil -- that reincarnation of Haman -- to swap his nuclear labs for a two-week vacation in Miami Beach. Ah, the power of prayer and a life of virtue.

The Most Important Thing that I Learned in Israel

To Pray Or Not To Pray