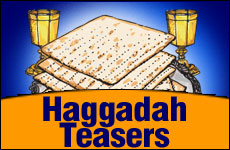 Stretch your knowledge of the Haggadah text.

1. The Seder begins with a recounting of the 15 steps to be performed (Simanei Haseder – Kadesh, Urchatz, etc.). Which Hebrew letter appears here the most (9 times)?

2. Which of the Simanei Haseder (Kadesh, Urchatz, etc.) contains a Hebrew letter that is used twice? (4 answers)

3. What verse (that we say every day) is the only place in the Haggadah where Moshe's name is mentioned?

In the paragraph following the ten plagues, we state that the Children of Israel “trusted in Hashem and in Moshe His servant." We say this verse every morning in Pesukei Dezimra, before the recital of "Az Yashir."

4. What expression describing Hashem appears 11 times in the Haggadah, but nowhere in the Torah?

The expression “Hakadosh Baruch Hu” (the Holy One, blessed is He) appears 11 times in the Haggadah, but nowhere in the entire Torah.

5. What Torah text is contained in the Haggadah?

The text beginning with the words "Arami Oved Avi" is found in parshas Ki Tavo (Deut. 26:5).

7. Which two of the ten plagues are mentioned twice in the Haggadah?

The plagues of blood and pestilence (dever) are mentioned twice – once in the full listing of the plagues, and once in earlier paragraphs.

8. How many stanzas are in the “Dayeinu” song? What two other praises of Hashem in the daily prayers contain that same number?

There are 15 stanzas in “Dayeinu.” There are also 15 blessings in the daily morning blessings (Birkos Hashachar), and 15 words of praise in the Emet Veyatziv paragraph recited after the Shema.

9. What 7 names of people from the Torah are mentioned in the verses of Hallel? Which 2 appear most frequently (4 references each)?

10. Which 8 body parts are mentioned in Hallel?

11. Which body of water is mentioned in Hallel?

The Jordan River (Yarden) is mentioned in Psalms 114:3.

12. Which chapter of Hallel is the shortest chapter of the entire Tanach?

Psalms chapter 117 has only two verses.
Like What You Read?  Give Jews around the world the chance to experience engaging Jewish wisdom with more articles and videos on Aish. It would make your mother so proud and as a nonprofit organization it's your support that keeps us going. Thanks a ton!

Using “Google Exodus" in the Classroom

Games and Tips for the Seder
Should I Break Up, Get Engaged or Keep Dating?
Time Is Your Precious Commodity
A Constant World in Flux
Comments
MOST POPULAR IN Passover
Our privacy policy