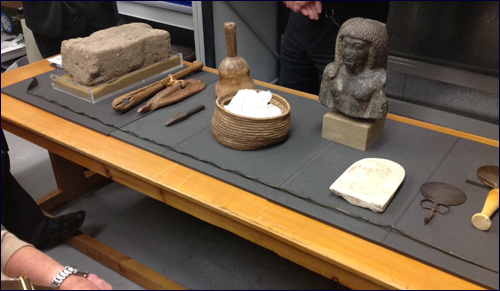 A mud brick with straw, stamped with a royal seal that says “House of Ramses ll,” and other cool artifacts.

The table of archaeological finds below, presented to me by Dr. John H. Taylor, the curator of the Egypt Department of the British Museum in London, reveals a mud brick with straw which is stamped with a royal seal which says: “House of Ramses ll”. The mud brick, seen on the left side of the photo below, is one of 20 held in the basement vaults of the museum, and not exhibited to the public. The brick has been carbon dated to the Israelite period of slavery in Egypt. 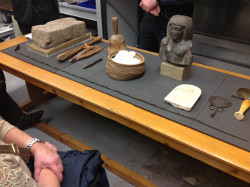 Dr. Taylor states that the Israelites did not build the pyramids as is commonly thought. The pyramids were built 100 years after the Israelites left Egypt. What they did build were cities. The Bible states in Exodus 1:11-14, “So they appointed taskmasters over it (the Israelite nation) in order to afflict it with their burdens; it built storage cities for Pharaoh, Pithom and Ramses…They embittered their lives with hard work, with mortar and with bricks…” The Bible further states in Exodus, 5:10, “The taskmasters of the people and its foremen went out and spoke to the people, saying, “So said Pharaoh, I am not giving you straw. Go yourselves and take yourselves straw from whatever you find, for nothing will be reduced from your work.” In the close up photo of the brick below, one can see the straw and the seal which states, “House of Ramses ll”. 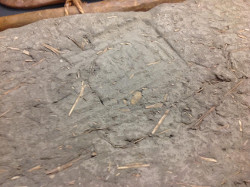 Below is a mural of slaves building a structure in Egypt dated from the Israelite period showing a pile of mud bricks similar to the brick displayed on the table above. Dr. John H. Taylor holds curatorial responsibility for ancient Egyptian funerary antiquities, amulets and jewelry. He also provides curatorial supervision for the departmental loans program. These items are sometimes loaned to outside museums and organizations.

Dr. Taylor then showed me a 12-foot iron snake staff found in a pyramid tomb. Shown below, the staff has a cobra head and is wavy and is evidence of the Egyptian magician’s staves mentioned in the Bible in Exodus, 7:11-12, “The magicians of Egypt did so with their incantations. Each one cast down his staff and they became snakes; and the staff of Aaron swallowed their staffs.” The entire snake staff can be seen at the front of the table in the first photo above. The staff is wave like and when placed on the ground and manipulated by a magician can give the illusion of snake like movement. Egyptian magicians were known to be illusionists. 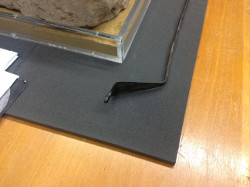 The wicker basket below is dated to the Egyptian period of the Israelites and is evidence of the use of wicker baskets as recorded in the Bible, Exodus 2: 3, “She could not hide him any longer, so she took a wicker basket and smeared it with clay and pitch; she placed the child (Moses) into it and placed it among the reeds at the bank of the River (Nile). “ 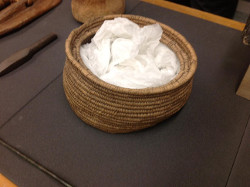 The copper mirrors at the far right of the first photo above are evidence of the existence of copper mirrors used by Israelite women to beautify themselves and to entice their husbands to produce children despite the dangers of bringing children into the world amidst a slave existence. These copper mirrors are referred to in the Bible in Exodus 38:8, “He (Moses) made the wash basin of copper and its base of copper, from the mirrors of the legions who massed at the entrance of the Tent of Meeting. “ The 11th century French Biblical commentator, Rashi, comments that the Jewish women used these mirrors to beautify themselves in order to entice their husbands to produce children despite the fear of bringing children into a life of slavery. This attests to the greater faith of the Israelite women than that exhibited by the Israelite men, which faith has continued to sustain Jewish continuity.

The organizer of this private tour to the British Museum is London educator and historian, Rabbi Aryeh Forta who organizes monthly private tours of the Jewish artifacts at the British Museum. Also seen on this tour was a 3500 year old matzah with finger imprints of the matzah maker and silver wine bowls from the palace of Achashverosh mentioned in Megillas Esther.

Goering and My Grandmother
Scientific Curiosity and the Divine Encounter
Mind Over Milkshakes
Love the Convert
Comments
MOST POPULAR IN Current Issues
Our privacy policy
Aish.com Is Looking for Great Writers