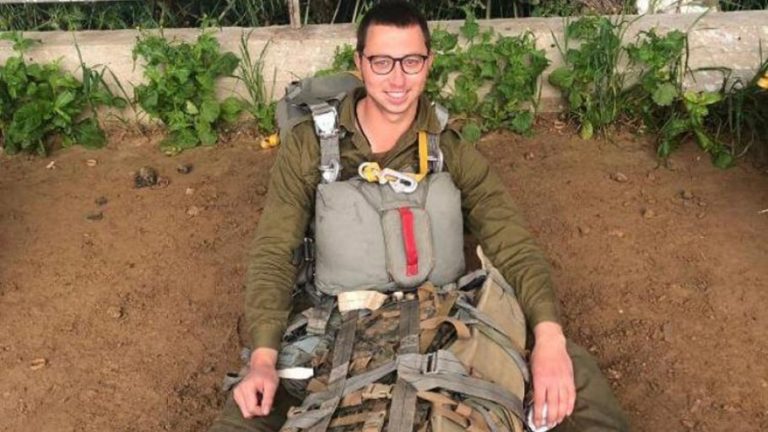 Eva Slonim was a victim of Mengele’s horrific experiments in Auschwitz. Her grandson Ronen’s revenge is proudly defending the Jewish People.

When Eva Slonim was a 12 year old girl, she was tortured by the notorious Josef Mengele in Auschwitz. Stories of her harrowing years in the Shoah and her defiant path to rebuilding her life after the war left an indelible mark on her grandson Ronen. Last year, at age 24, Ronen left his comfortable life in Melbourne Australia and moved to Israel where he is serving in the Paratrooper unit. From his army base where he is mid-way through advanced combat training, Ronen spoke to Aish.com about his life, his decisions and the relationship with his grandmother that has guided him every step of the way.

I knew my grandmother had a story to tell

Growing up in the leafy Melbourne neighborhood of Caulfield, one of five siblings, Ronen says he was in his teens when he first understood his grandmother Eva had an important story to tell. "We lived nearby,” he says, “I would visit every Shabbat and usually during the week as well. We talked about our lives, what was going on during the week. Sometimes, as Shabbat was drawing to an end and we were sitting together, she would open up about some of the things she went through." 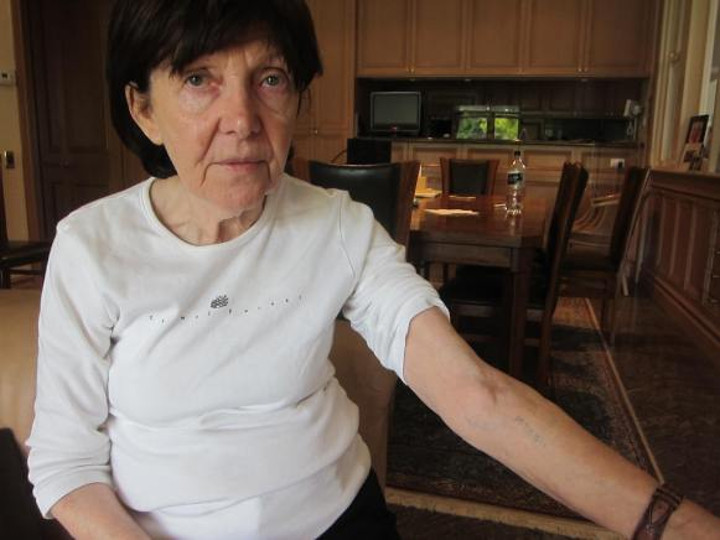 Eva Slonim showing he tattoo she received in Auschwitz-Birkenau, A27021

Eva Slonim, 88, was born Eva Weiss in 1931 to a religious Jewish family in the Slovakian capital Bratislava, then a major city in Czechoslovakia. Her father owned a successful textile business, she attended a Jewish day school and enjoyed happy times in what was then one of Europe's thriving Jewish communities. The second oldest of five children when Hitler rose to power, Bratislava was part of a protectorate which aligned itself to Nazi Germany. Amid a steady rise of anti-Semitic legislation and attacks, she witnessed her brother assaulted in broad daylight and her grandfather’s front teeth knocked out when officials stormed into their family home. Her father was also arrested with no reason given, released two weeks later for a heavy ransom which her mother managed to pay.

Understanding that things were only getting worse, the Weiss family separated and went into hiding, but their former nanny betrayed them. Eva was 12 in 1943 when she and her younger sister Martha, were deported to Auschwitz.

Nightmare as a Mengele twin

Guards at Auschwitz had specific instructions to pull identical twins from the crowds of confused arrivals at the camp. Although escaping the immediate death sentence that awaited most others deemed useless to the Nazi regime, these children were to become human guinea pigs at the disposal of the notorious Dr. Joseph Mengele.

Although three years older than Martha, Eva looked very similar to her younger sister and they were pulled aside. It was under Mengele’s cruel watch that she sustained a series of often daily examinations and injections leaving her weak and ill, as the so-called medical team at Auschwitz noted the daily effects of their tests on her. Never told the reasons of what was being done to her, she saw other inmates fall sick and die around her, never knowing what the next day would bring. On one occasion her number was called and she had four bottles of blood removed, leaving her already frail body on the brink of collapse and even more exposed to disease. 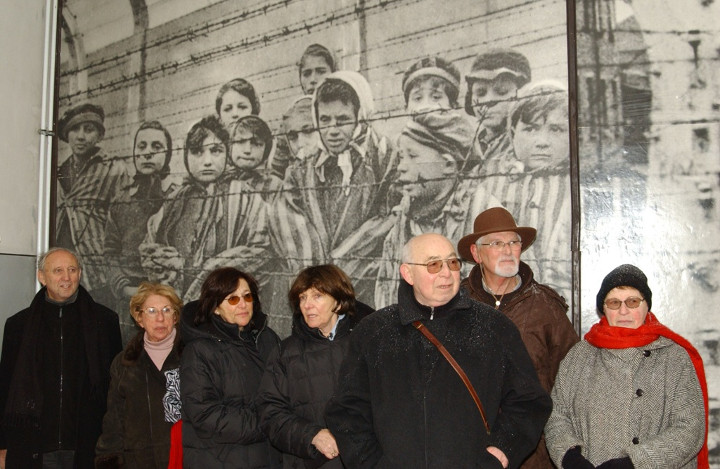 By the time of her liberation she was suffering from tuberculosis, typhoid and dysentery. Together with her sister she was one of ten children photographed behind barbed wire by the Soviets as they liberated the camp on January 27 1945. It was to become an iconic image, which Yad Vashem later recreated, bringing together Eva, her sister and the other surviving children pictured beyond the barbed wire.

A member of Bnei Akiva, a Zionist youth movement from age six, Eva has said that even during her most difficult experiences a great love of the land of Israel kept her alive. “It gave me enormous hope and aspiration to the future. It was something I could really cling to.”

She made a pact with God after seeing the horrific state of the inmates on her arrival to the camp. “I saw women standing against a barbed wire fence looking emaciated,” she said in testimony. “They looked more like caged animals than humans.” Terrified that she would become one of the inhuman mass of bodies she was looking at, Eva turned heavenward, “One day, I will have a large family and try and rebuild all that has been destroyed,” she said, “But only if you don’t deprive me of my feelings.”

After being liberated, both sisters were reunited with their parents, moving to Australia, far away from Europe’s blood-soaked shores. It was there that Eva kept her part of the promise.

In 1953, aged 22, she married Ben Slonim, and together they set about raising a family built on the strong Jewish values Eva had remembered from her own childhood. "We joined my grandparents every Friday night,” Ronen says, “The Shabbat meals were full of singing and there was always a warm atmosphere. Judaism played a central role in our family.”

Before going into hiding, Eva’s father had buried a Torah scroll the family had owned. He managed to dig it up after the war and take it with him to Melbourne. "Every simcha the family had," Ronen says, "we would read from it in the synagogue. It still gives my grandmother great joy to hear one of her grandson's read from it." 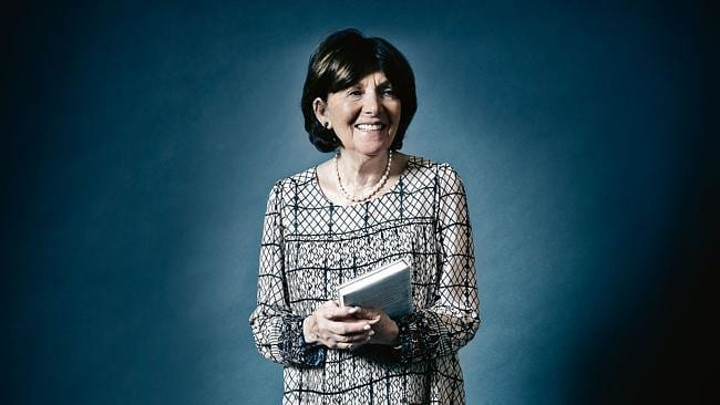 “My grandparents had a big influence on me when I was growing up,” Ronen says. “It was quite difficult to hear the things that she had been through,” recalling that he sometimes woke up with nightmares. “The stories of how she managed to stay connected to her Judaism also had a big effect on the way I saw Israel and the heavy role in its importance,” he adds.

He visited Israel with his family to mark his bar mitzvah. "It was a very special experience," he says, "especially to be there with my grandparents. There were lots of family and close friends there, and I read from a Torah scroll at the Western Wall."

After finishing school, Ronen returned to Israel, this time to pursue his Jewish studies at the Har Etzion yeshiva south of Jerusalem where his love of Torah learning grew alongside his desire to one day make Israel his home.

"It was something I thought a lot about then," he says but shelved for a few years as he returned to Australia to complete a degree in Economics at the University of Melbourne. 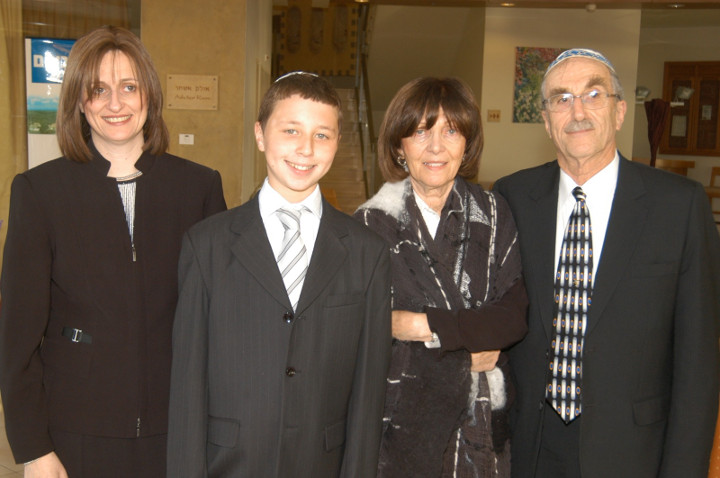 Ronen with his aunt and grandparents

"I’d always thought that if I made aliya I would also serve in the army," he said. "But I was getting close to my mid-twenties.” Realizing he was running out of time if he wanted to join a combat unit, it was Seder night during a family trip to Israel in 2017, when things finally crystalized. “It was the moment I knew that Israel was where I belonged,” he said. “I told myself, enough, I’m going to do this."

Finding it hard to break the news to his mother, he wrote her a letter. "It was the easiest way to express it," he said, adding that the decision was made harder because his father had passed away when he was just 14. "She was very supportive," he said, adding, "Melbourne is a great place to live. I just wanted to be a part of what I saw and felt in Israel."

Telling his grandmother he was leaving Australia was one of the hardest things Ronen says he has had to do. "We are very close; even now we speak every week and catch up. She is a big supporter of Israel and after everything she went through she is very proud to have a grandson serving in the army.”

When he made known his plan to volunteer two years in a combat unit where he would be five years older than his commanding officers, Ronen recalls there were many naysayers. "’You won't cope being told what to do by 18 year olds,’ people told me. But it hasn’t been further from the truth," he says. "I have really bonded with the soldiers around me." 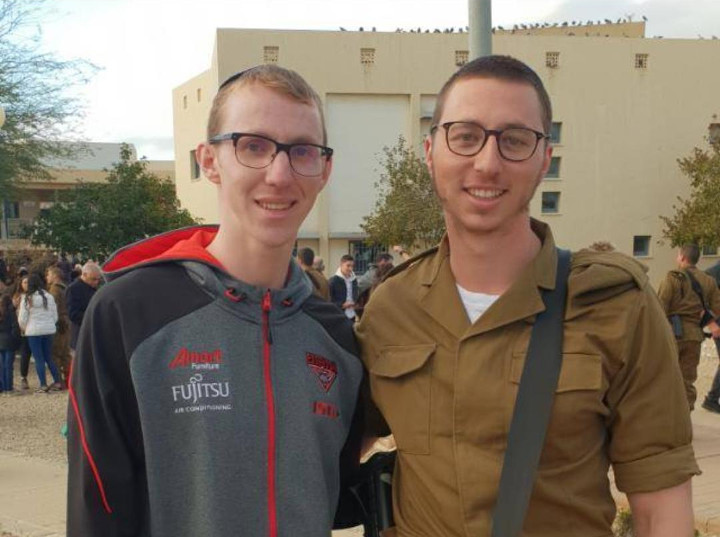 Ronen with his younger brother.

The only lone soldier in his unit, Ronen says, “It is immensely satisfying and meaningful to be here. It is an honor to be serving in the IDF. I am privileged to be able to play a small part in protecting the Jewish People. When there are tough moments, I just have to remind myself of that."

One of a handful of religious soldiers in his unit, he is given time to pray three times a day in accordance and says he always finds times to study Torah every day. "When we are on the base, I can do a little more, and when we are out in more rugged terrain, I may do a little less, but I always learn. It's become an essential part of me which I couldn't be without."

Looking up at the stars. “One thing that has always stuck in my mind from my grandmother's experience,” Ronen says, “was something her father told her before they separated to go into hiding. ‘Who knows long it will be before we can speak to each other again,’ he told her. ‘Every night, look at the stars and speak to them. Tell them your worries, speak about your day, what’s on your mind, and I’ll also look to the stars, and will do the same. This way we'll stay in contact.’"

Those words, “Gazing at the stars” would later become the title of Eva Slonim's memoir, a chilling and inspiring account of her life before, during and after the Holocaust. The words have also left their mark on Ronen.

The Spirit of Alisa

Out of the Mouth of Roni
The Power Of Prayer
Va’etchanan 5782: A for Effort
Can You Show Me This "God?"
Comments
MOST POPULAR IN Israel
Our privacy policy
Aish.com Is Looking for Great Writers