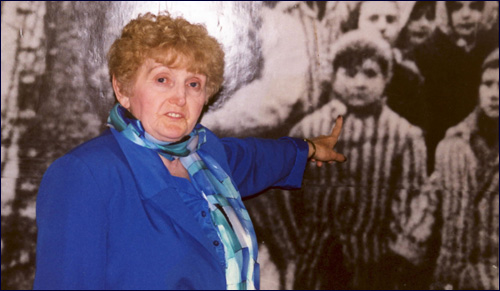 Is it right to forgive an unrepentant mass murderer?

I would never criticize Holocaust survivors. Even if I disagreed with them I would choose silence over disapproval.

Their pain trumps my judgment. Their anguish overrides my feelings.

I don’t dare speak ill of Eva Mozes Kor whose story went viral last month. And what a story it was! Eva, now 83, survived the hell of Auschwitz and the notorious Nazi doctor Josef Mengele who carried out excruciatingly horrible “medical experiments” on inmates who had the dubious distinction of being twins. To hear what she endured is almost too painful for words.

Eva’s twin, Miriam, eventually succumbed to her torture. But Eva, still alive, came to an almost unbelievable decision. It is the reason for her video’s astounding popularity.

Titled “The Power to Live and Forgive” Eva has chosen finally to forgive her tormentor, the man commonly referred to as “the Angel of death at Auschwitz”.

“I imagined Mengele was in the room with me,” she recounts. “I picked up a dictionary and wrote down 20 nasty words which I read clear and loud to that make-believe Mengele in the room. And at the end I said, ‘In spite of all that, I forgive you.’ Made me feel good.”

As a personal decision for her, I can only feel pleased that she has found a measure of self-healing. If that is a source of comfort to her I must respect her wishes. What I cannot accept however is the verdict of the millions of viewers which suggests that Eva has now become the personification of the ideal victim of Nazi barbarism – a saintly soul by virtue of her willingness to forget and forgive, a perfect role model for all other survivors or students of all too recent modern history.

For a select few forgiveness in this situation may be their best choice for personal healing and psychological survival. But it is neither theologically sound nor morally acceptable.

Mengele died as an unrepentant sinner. He never showed any remorse, shame or regret. No apologies were ever uttered for his actions, no sincere attempt to atone for his crimes ever attempted. To forgive evil without demanding its admission of guilt is to condone it and to grant it a legitimacy which empowers it rather than helps to create the conditions for its rejection.

Forgiving people who don't personally atone for their sins makes a statement: Repentance isn't really necessary. Can anything be more immoral than encouraging evil by refraining from any condemnation of those who committed it?

The positive reaction to Eva’s video is in sync with contemporary models of correct psychological behavior as well as “religiously approved” righteous actions. The day after the Columbine High School massacre, a group of students announced that they forgave the killers. A short while after the Oklahoma bombing, some people put out a call to forgive Timothy McVeigh. And, on September 12th, immediately after the tragedy of 9/11, on several American campuses colleges groups pleaded for forgiveness for the terrorists responsible for the horrific events of the previous day.

These were deeply misguided gestures of compassion that carried potentially tragic consequences. Evil unchallenged is evil pardoned. To forgive and forget, as Arthur Schopenhauer so well put it, "means to throw valuable experience out the window." And without the benefit of experience's lessons we are almost certain to be doomed to repeat them. That's why to forgive those who remain unrepentant before dying is to become an accomplice to future crimes.

Recent articles have taken note of the contemporary phenomenon of “forgiveness shaming.” Forgiving, no matter what the original offense, has achieved such moral glorification that people who refuse to join in the chorus of “I love you no matter what you did to me” have become the ones who need to justify their stance or face communal shaming for their rigid “intolerance.”

Jeanne Safer, a prominent psychoanalyst and psychotherapist wrote about a colleague who was exposed to disturbing behavior and bullying from her brother who never apologized for his actions. “Contrary to the conventional wisdom, refusing to forgive or have further contact with an unrepentant, abusive relative is therapeutic. While it's commonly believed that forgiveness promotes mental health and alleviates depression, doing the opposite can express a person's very right to live.”

Elizabeth Bernstein wrote in The Wall Street Journal, "At first it may help the person who has been hurt to let go of anger, resentment and desire for revenge. But forgiving also may encourage the transgressor to do it again. Experts say reaching true forgiveness is a journey that may take years. And it is at times best not to forgive."

Jeffrie Murphy, a professor of law, philosophy and religious studies at Arizona State University, who has written about the issue for years, warned against assuming that forgiveness was always the right answer and that someone who failed to offer forgiveness was “not a good person or a mentally healthy person.”

More and more voices are being heard that forgiveness has to be earned, and to “forgive in order to heal” without receiving any expression of remorse can be destructive.

Resurrecting an Ancient Face of Evil

Free Vacation: How I'm Helping Families in Need to Get a Deserved Break

Time to Affirm Jewish Pride
Should I Break Up, Get Engaged or Keep Dating?
Time Is Your Precious Commodity
A Constant World in Flux
Comments
MOST POPULAR IN Israel
Our privacy policy