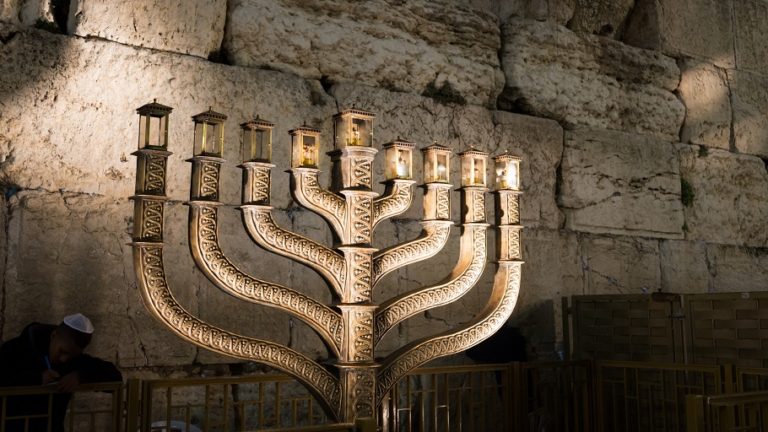 Indispensable to the Jewish worldview is the idea that humans are unique, that we possess a spiritual component and that our actions are freely chosen.

Hanukkah — the Jewish “Festival of Lights” — is often dismissed as a minor celebration, artificially magnified by its proximity in the calendar to Christmas. The Jewish holiday is indeed not mentioned in the Torah, as the event it celebrates took place long after biblical times.

Minor, though, it is not.

On a superficial level, the Jewish winter holiday celebrates a Jewish rebel army’s routing of the Greek-Syrian Seleucid Empire’s forces, and its recapture of the Jewish Holy Temple in Jerusalem, nearly two centuries before the Common Era.

It wasn’t just an army, though, that was vanquished. Repelled no less significantly was a worldview, a way of understanding the human condition.

To the Talmud-era rabbis who established Hanukkah, an even greater enemy than the flesh-and-blood soldiers who had defiled the Temple was some Jews’ adoption of Hellenistic ideals, a fundamental part of which was what we today call materialism.

No, not the luxuriating in physical pleasures, though that, too, was part of the ancient Greek world. The words “cynic,” “epicurean” and “hedonist,” after all, are rooted in Greek philosophical schools. But rather the more rarefied philosophical concept called materialism, which contends that everything can be reduced to the physical, that there is no real entity called a soul.

“Dualism,” by contrast, is the belief that we humans are both physical and … something more.

Many contemporary scientists, delighted by their advances in understanding how the brain functions, have embraced a modern version of materialism. The conviction that we have souls, they patiently explain to lesser folks, is nothing in the end but a misleading product of the electrical activity within our craniums. Our every thought and action, moreover, is predetermined. Just as other physical processes can be predicted on the basis of the array of circumstances at their origin, if we had sufficient knowledge about any individual’s brain, we could predict his or her every action. Free will, to a materialist, is just a persistent illusion.

“The qualities of mental life that we associate with souls are purely corporeal,” Prof. Paul Bloom of Yale, for example, has averred. “They emerge from biochemical processes in the brain.”

A Harvard professor, Steven Pinker, advises us to set aside “childlike intuitions and traditional dogmas” and recognize that what we conceive of as the soul is nothing more than “the activity of the brain.” Nothing but brain cells are evident, after all, in a brain.

But finding no evidence of the soul in a brain is like finding no trace of Yo-Yo Ma in a stereo speaker and concluding that the cello concerto that just ended, and Mr. Ma for that matter, are only imaginary.

To dualists, though, our brains are conduits for consciousness and necessary for contemplating our souls, but not identical with them.

The materialism/dualism debate was carried on by philosophers like Thomas Hobbes, championing the former view, and René Descartes, who embraced a form of the latter one.

The issue is more than academic. If we humans are nothing more than our physical cells, and the innate human awareness of our souls and sense of free will are mere illusions, we have no ultimate value beyond that of any insect. And no compulsion, beyond an ultimately meaningless utilitarian social contract, to bind ourselves to any ethical or moral system. A society that denies the soul idea is, in fact, in the word’s deepest sense soulless.

The ancient Greeks were brilliant analyzers of the physical world. They developed the sciences, calculated the earth’s circumference, proposed a heliocentric theory of the solar system and focused attention on the workings of human beings. But only as physical specimens.

To be sure, the ancient Hellenist philosophers spoke of the “soul,” but they referred only to what we would call the personality or intellect. The idea of what we call a soul, an entity that can be sublimated or polluted by the conscious exercise of free will, was indigestible to the Greek worldview.

As indispensable as that idea always was and remains to the Jewish worldview, which insists that humans are unique, that we possess not only physical bodies but a spiritual component, that our actions are not predetermined but freely chosen, that what we do is not predetermined, and makes a difference.

And so, celebrating as it does, a victory, if a temporary one, over the materialistic worldview, Hanukkah is a truly profound holiday.

Its eight days — eight being the number associated in Jewish texts with that which is beyond perceptible nature — are marked with the lighting of candles and the custom of giving children gifts. The greatest of the holiday’s gifts, though, is its vital lesson for all humankind.

This article originally appeared in the New York Times.

The Nature of Nature
What Makes Eli Run?
The Tyranny of Materialism
Science Enters the Mysterious Inner World of Consciousness
Comments
MOST POPULAR IN Chanukah
Our privacy policy