Principles of the Soul: #7 - Purim, Soul and Your Role in History 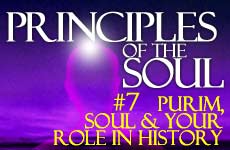 Purim teaches us that nothing is random, and that every soul has a role to play in the Divine tapestry called history.

Judaism teaches that time pulses through history in cycles.(No, this is not the beginning of a Star Trek episode.) Every year we re-encounter the holidays -- Passover, Shavuot, Rosh Hashanah, Yom Kippur, etc. -- and, on each round, we have the opportunity to experience and grow from the same spiritual energy that was available on that day in the past.

Each holiday, we get a chance to take a vertical jump into a soul experience simply by taking advantage of what that day has to offer.

Purim comes with its own special set of opportunities.

Purim comes with its own special set of opportunities.

When you read the Book of Esther this week, pay special attention to the sequence of events in the story. You may notice a few interesting coincidences. Then you'll probably notice a few more. By the time you have finished the Megillah, it will seem like one long string of improbable events, one after another after another. And then, you will realize that none of it was coincidence.

This is one of the key lessons of Purim -- nothing is random, there's no such thing as a coincidence. All of history is woven as part of a Divine tapestry.

When Mordechai related this to Esther, he also told her something else that shook her to her very core.

Mordechai declared ... to Esther: 'You had better not fantasize that in the royal palace you will escape the fate of all the other Jews. For, if you keep silent at this time, release and liberation will materialize for the Jews from some other source, and you and your father's house will perish.' (Esther 4:12-14)

Mordechai had previously asked Esther to petition King Ahashverosh to overturn Haman's final solution for the Jews. Esther sent Mordechai a response, "Mordechai, anyone who goes uninvited to see the king is killed on the spot unless the king decides to extend his scepter and allow them to live. So, how can you ask me to do this? I don't stand a chance!"

What did Mordechai say in reply? Did he tell Esther that she was the Jewish people's only hope? Did he plead with her that she must try something, no matter what the consequences?

Mordechai spoke to Esther's soul; he said, in effect, "If you don't do it, someone else will."

He said (and, of course, I am paraphrasing): "Esther, please don't think that we need you in order for the Jewish people to be saved. The Jewish people have a destiny to fulfill in this world, and God will save us with or without your help. The only question, Esther, is this: Are you going to choose to fulfill your role in writing the next page of history? Are you going to stand up and be counted among those who chose to play the personal role for which they had been created? Esther, maybe the only reason who became queen was for this very moment!"

EVERYONE HAS A PART TO PLAY

Mordechai taught Esther a basic principle. If there are no coincidences, if everything is part of the Divine plan, then each one of us has been chosen to fulfill a specific role in history. We have the free will to choose whether or not we will live up to our potential or fall short of it.

Esther did not have to hear anything else. From this point on in the story, it is Esther's leadership that saves the Jewish people. She tells Mordechai to instruct the Jewish people to fast and repent, and she crafts the perfect trap to stop Haman.

Esther fulfills her role in history to such a degree that a book in the Hebrew Bible, the Tanach, carries her name.

Purim teaches us that in the context of our own life, we are all like Esther.

Purim teaches us that in the context of our own life, we are all like Esther.

It is not accidental that you are presently in your circumstances, that you have been raised in your specific family. On Purim the energy is there for you to get in touch with the part of your soul that recognizes the underlying unity in history and shows you how you play a part in it.

On Purim, ask yourself the following questions:

The mystics say that every person has their name somewhere hidden in the Torah. The Torah is the blueprint for the world and you have been built into the blueprint!

The Talmud says that Haman's name is found in the verse where God asks Adam if he has eaten from the forbidden tree. (Not a great place to be found!)

The people who truly are living in sync with their soul, who are reaching their potential, will know exactly where to find their name.