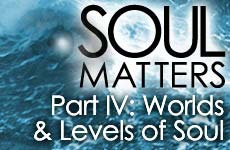 The levels of soul transform prayer into a spiritual elevator that takes us up into the presence of God.

In addition to the content and vocalization of prayer, the levels of soul are also reflected in the order of the daily prayer service itself, which can be said to contain four principle sections:

According to tradition, these four sections represent a spiritual elevation, from the mundane world of physicality -- represented by the sacrifices -- to the most sublime level possible to humans: standing in the Presence of God during the Shemonah Esrai prayer. The sections in-between facilitate this spiritually-upward movement.

Now, you may recall that in the first essay I mentioned that Chiyah represents such a high spiritual level of soul that, for the most part, we don't deal with it. However, this goes to show how great the potential is during prayer. We can reach extremely high levels of consciousness in the daily Shemonah Esrai prayer.

Though animal sacrifices are not sanctioned in Judaism without a Temple in our midst, the concept is eternal. The essence of a sacrifice was the blood that was shed, symbolizing the sacrifice humans are expected to make to live meaningful and moral lives.

The Torah itself states:

The soul (Nefesh) of the flesh is in the blood.

Hence the connection between the Nefesh and the section of Sacrifices in the daily prayer service.

This is the level that we must first aim to elevate before attempting to enter higher levels of consciousness, because, as we all know, we are the least spiritual when we first get up in the morning after rolling out of bed.

The level of Ruach, which we previously compared to the ladder in Jacob's dream, always represents a transitional stage -- a journey from one point to another. Here, also, the Introductory Psalms represent a transition -- from a lower level of consciousness to a higher one, from mundane life to a God-consciousness.

It has always been the power of Psalms to draw us closer to God and to heighten our sensitivity to Divine Providence.

This has always been the power of Psalms -- to draw us closer to God and to heighten our sensitivity to Divine Providence.

The level of Neshamah, as we explained in the Part I of this series, represents the origin of man's soul in the "mouth of God," so too speak. The special blessings that we say in advance of Shema remind us how God is the source of all created things, and praise Him for His daily kindness.

Furthermore, this section of prayer relates how the angels praise God as well, giving us a conceptual "peek" into the heavenly world above.

According to Kabbalah, this level of spiritual consciousness corresponds to the level from which man's soul emanates. This is why the Neshamah is said to correspond to this section of prayer.

DRAWING ON THE LIFE FORCE

After having recited the Sacrifices section, the Introductory Psalms, and the Shema section, we arrive at the Shemonah Esrai also known as the "Silent Prayer."

Once we have reached this spiritual plane, we are said to be standing in the presence of God, and therefore, great care must be taken to remain focused at all times on the words and their meanings. A successful Shemonah Esrai allows a person to draw down spiritual energy from the level of Chiyah -- the true source of one's chiyos, "life."

As we move from section to section in the prayer service, we also move from level to level in the soul-realm.

Hence, as we "move" from section to section in the prayer service, we also "move" from level to level in the soul-realm.

Without going anywhere at all (physically-speaking), we can traverse levels of consciousness if we know how to properly utilize the prayer service. It goes without saying that the more intention we have to "connect" to God during prayer, the more successful we will be at succeeding at growth through prayer.

Getting and Giving the Love You Need

Universal Truths: Ethics of the Fathers: 2:6