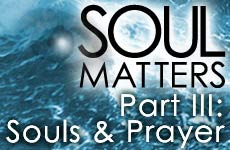 Connecting with the five levels of soul during prayer draws down different aspects of spiritual energy and transforms the prayer experience.

As we have already discussed, there are five "levels" of soul:

The top two are so spiritual, that, for the most part, we don't pay attention to them in terms of their effect on everyday life. However, one place where we can see the effect of the bottom three levels of soul is in the prayer service.

Although the prayer service seems to be nothing more than mere words and ritual to many, it is not so.

On the contrary, when the "Men of the Great Assembly" (391-261 BCE) finalized the form of prayer for the entire Jewish people, they also had Kabbalah in mind.

What does this mean mystically speaking?

Every prayer is made up of words that have three distinct features: letters, vowels, and concepts.

The letters themselves are "physical," inasmuch as they have been written and exist on the page. Thus, the letters are said to correspond to the Nefesh, which is the least spiritual of all the levels of soul, and therefore corresponds to the physical world.

However, vocalization of the words is the process of allowing air to pass through our larynx, and thus corresponds to the level of soul called Ruach, meaning "wind."

Vocalization of the words causes air to pass through the larynx and corresponds to the level of soul called Ruach, "wind."

Thus, when a person says the word with the appropriate vowels -- so accuracy does make a difference -- he is drawing from the spiritual energy of both his Nefesh and Ruach. In so doing, he causes rectification to creation on both of these levels -- that is, he causes an elevation of both of these levels, making the physical world in which we live a more spiritually-perfect place.

Furthermore, this also means that, even if a person doesn't fully comprehend the meaning behind the Hebrew prayer words he is pronouncing, still, there is a tremendous effect occurring in creation and in his life.

However, there is a higher level yet, and that obviously includes understanding and appreciating the message behind the words.

Tradition tells us that the Neshamah is associated with the mind of a person, and life itself teaches that understanding is a function of this faculty. Therefore, if one prays with understanding and appreciation of the words he is vocalizing, then, he is in fact drawing from the level of the Neshamah as well, and causing rectification on this very high level.

NO TWO PRAYERS EVER THE SAME

Knowing this should make it much easier to understand why two prayer services can never be the same, even though the words and practices are.

Prayer is the ultimate meditation service, and requires effort and fine tuning, until one has mastered and coordinated the words, the proper vocalization, and the thoughts and intentions behind the words.

Prayer is the ultimate meditation service, and requires effort and fine tuning, until one has mastered it.

In fact, for this reason it is better that the words are the same each time, and the service is consistent. For, constant repetition of the words allows them to become "second nature," freeing our minds to focus instead on the lofty notions expressed by each prayer.

The Men of the Great Assembly understood this -- being prophets themselves -- and arranged each service to facilitate this exceptional process of spiritual growth.

So, therefore, next time you open your Siddur to pray, or even if you have reached the point where many of the prayers flow from memory, also take the time to connect up to each prayer on the levels of Nefesh, Ruach, and Neshamah.

Unfortunately, not enough people do this, but those who have will tell you that, for them, prayer has become an extremely spiritual and exhilarating experience.

In Rehab, Discovering the Power of Elul

Rebecca Gave Only After She was Asked