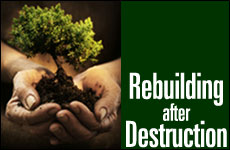 How one man reacted when his only son was murdered.

Last night I attended a poignantly beautiful event, full of joy, yet laced with an unspoken sorrow. A synagogue near my house moved from the caravan that had been their home for close to a decade to a beautiful, spacious new building. The highlight of the inauguration ceremony was escorting the Torah scrolls from the caravan to their new home. The event had all the trappings of the arrival of royalty.

First came two long lines of young boys, carefully holding flaming torches aloft. They were followed by a van bedecked with dozens of light, topped with an illuminated crown, and playing lively music. Just behind the van was a wedding canopy with the Torah scrolls to which we are all wed, surrounded by dancing men, voices lifted in song.

In a prominent spot under the canopy stood the donor who had enabled the building to progress from dream to reality. Adolfo Shlomo Picciotto held one of the Torah scrolls, his face radiating happiness. A slight man in his seventies, Picciotto exuded aristocracy. But it was his story, rather than his visage, which kept my eyes glued to the Brazilian millionaire.

Born in Brazil to a wealthy and influential Syrian family, Picciotto's real estate deals were wildly successful and his businesses spread across the globe. He had a loving wife and four children. His extended family was warm and close-knit, and its members often turned to him for advice. He held a prestigious post in the Sao Paulo Jewish community. Then, ten years ago, Picciotto's world overturned.

His only son Abramo (Avraham) was home for vacation from his studies in Boston. A week after Sukkot, thugs kidnapped him as he left the Sao Paulo synagogue. They demanded an outrageously high ransom. Picciotto paid it in full. But the kidnappers murdered his son. His body was deserted in a remote area, to be found only two days later. Abramo had been 22 years old.

The devastated family flew to Israel to bury their only son. Rabbi Bakshi Doron, the former chief rabbi, was requested to officiate at the funeral. The family then sat shiva in a hotel. When the shiva ended, friends and family flew back to Brazil -- all except Picciotto. He couldn't leave the place he had just buried his son, his dreams, his hopes. He decided to remain until the 30-day mourning period was over.

To commemorate his son's memory, he would build 22 synagogues -- one for every year of Abramo's tragically short life.

During those difficult days, he'd visit Rabbi Doron who gave him comfort and solace. They came up with an idea with which Picciotto could commemorate his son's memory. He would build 22 synagogues -- one for every year of Abramo's tragically short life.

Picciotto lost no time putting his plan into action and he became the savior of synagogues. He favored struggling communities in new neighborhoods which had already started construction, but had had to stop when they got mired in the quicksand of debt. He built synagogues all across Israel, as well as two in the States. He has almost completed his goal; our synagogue in Beitar is the 20th he has helped build.

So there I was, on a languid summer day, watching this remarkable man rejoice. But for all that there was, I couldn't help but think of what would never be.

Picciotto stood beneath a canopy clutching a Torah to his heart. And in my mind's eye I thought of another wedding canopy -- the one that would never be.

At the height of the dancing, the men lifted Picciotto aloft on a chair. And as the singing reached a crescendo around the beaming millionaire, another image flitted across my mind -- that of a young groom lifted high on a chair smiling at his radiant bride.

Picciotto was given the honor of affixing the mezuzah to the synagogue's beautiful entrance. His voice shook slightly as he made the blessing. Was he thinking of the home that would never be built?

Suddenly, scenes from earlier that day rose up unbidden. I'd suffered a disappointment that morning. The letdown was so sharp I could taste it -- the acrid bitter taste of dreams gone up in flames. It came on the heels of several other crises and was so unexpected that I had little reserves in my emotional arsenal to deal with it graciously.

I'm too ashamed to admit the exact words I used, but I said something to my husband to convey the abandonment I felt. God seemed so very distant. It was intensely difficult to get through the day.

But none of my pain came anywhere close to the agony of losing a child. My disappointments paled into nothingness when set next to the despair of discovering that one's only son will never be seen again.

Yet look how this man reacted. I'll never know what went through his heart and head during those first few days after the murder, but I do know that within a month he had taken his pain and channeled it into glorifying God's name. Rather than sink into despair, feeling estranged from his Creator, he dedicated a great deal of his time and money to building synagogues in which God will be praised. How? Where did he find the courage and faith to do so?

Darkness was falling as the entourage entered the brightly-lit synagogue. I climbed the stairs and peeked down at the magnificent study hall. The room was dominated by a breathtaking ark. And upon it, in cursive gold lettering, was written a verse from Psalms: "Were not your Torah my joy, then I would have perished in my affliction."

This was his secret.

Every synagogue, every place where people turn to God in prayer and learn His Torah is a microcosm of the Temple.

It is a source of strength we can all share. In Ezekiel (11:16), God tells the prophet about his people, "Although I have distanced them far off among the nations and although I have scattered them in the lands, I have become for them a minor sanctuary in the lands where they have come." The Talmud (Megillah 29a) tells us that this verse refers to houses of prayer and Torah study.

On the ninth day of Av, nearly 2,000 years ago, our Temple was destroyed and our tangible, intimate relationship with our Creator was severed. No more would we see His Presence with clarity. No more was there a physical structure in which we could find solace, forgiveness, and connection.

But those gifts are not entirely gone. Every synagogue, every place where people turn to God in prayer and learn His Torah, is a microcosm of the Temple we once had. God's Presence rests within them.

It remains up to us to utilize this gift.

And when we do, it bring us closer to the realization of the promise in the next verse in Ezekiel (11:17), "I will gather you from the nations, and I will assemble you from the lands to which you have been scattered, and I shall give you the land of Israel."

The details of Picciotto's story were taken from the article "The Synagogues of Picciotto" by A. Y. Yosefi. A version of this article originally appeared in The Front Page.