The Twin Towers of Light 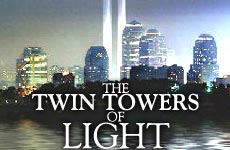 When the enemies of civilization attempt to cast the world into darkness, the most potent response is to increase the light.

A full year has passed since Tuesday the 23rd of Elul 5761, one week before last Rosh Hashana. If that date means nothing to us, it is because it is better known as September 11, whose shorthand of 9/ll has entered the daily lexicon of our lives. Where there once stood mighty twin towers of glass and steel, there now arise two thin beams of intangible light.

The metamorphosis of steel to light is apt. "Let there be light" are the first words that God utters at the Beginning. Perhaps, after the nightmare that has been visited upon the most powerful nation in history, it is time to move back to beginnings, and to re-examine where we came from, where we are now, and where we are going.

Also entering the daily consciousness of people everywhere is a term that was once relegated to far corners of the world like Israel: terror. Perhaps for the first time, the Western world began to appreciate that terror is more than an abstraction, and to understand somewhat the conditions under which Israelis have to live daily.

We have still not absorbed the impact of the tragedy. The United States did react swiftly and vigorously on the ground, fought the good fight in Afghanistan, and rid that unfortunate land of its Taliban oppressors. But it is much more difficult to stay the course, to wage the long spiritual and physical war to rid the world of the scourge of hatred and murder that constantly stalks free men and women, and that bares its poisonous fangs regularly in Israel.

The news lately has been filled with stories about the design of the new towers that are to be built on the same site. There is vigorous debate about whether this or that feature should be included in the plans. Shall the new towers include a memorial area? A park? Shops and offices? Spaces for prayer and meditation? Shall it be 100 stories tall?

While it is a natural human reaction to want to restore that which has been lost, and while a bigger and better Twin Towers might be nationally therapeutic, I think all this misses the point.

Let us imagine that the towers have been rebuilt, and that it is a glorious and fitting tribute to the resilience of the United States, of freedom, as well as a moving and lasting tribute to those whose lives were snuffed out. Then what? If we remain unchanged, we will have accomplished nothing.

What really needs rebuilding is something much more difficult to do: our own selves.

The response to 9/11 is not merely to rebuild buildings. Certainly that is a noble and praiseworthy project, and will perhaps serve to raise everyone's morale. But what really needs rebuilding is something much more difficult to do: our own selves.

And this, the first yahrzeit of that tragedy and the season of the High Holy Days, is an appropriate time to rebuild our selves. Each person recognizes his or her own areas that can use some rebuilding. To remodel our giving of charity; to restructure our study of Torah; to redesign our relationships with others; to refashion the way we pray; to reconstruct our personal relationship to our Creator. To strive to be, in all of our daily dealings with God and other people, a person of holiness -- in keeping with the central mitzvah in Vayikra 19: "You shall be holy, for I the Lord am holy."

What is the connection between 9/11 and rebuilding our own selves? Maimonides says it for us:

When there comes a time of affliction, the community must cry out [to Go d]...and everyone must realize that because of their own misdeeds has this befallen them... [This] will cause such affliction to be removed...

But if they do not cry out, but say that what happened to us was simply an ordinary accident, this is the way of callousness; it convinces them to hold fast to their wrongful ways, and leads to further affliction. -- Mishneh Torah, Laws of Fasting 1:2

Why such tragedies occur is beyond our knowledge. But one fact is clear: to live our lives post-9/11 as we lived pre-9/11 would be most callous. Having experienced such horror and such lasting sadness, it is required of us to reach upward to our Creator and inward to our deeper selves, so that something within us undergoes change for the better.

The most potent response to evil is to intensify the good.

A new twin structure of steel and glass will some day be built. But we need also to begin the plans for our inner structure, in keeping with the incisive words of the poem: Bilevavi mishkan evneh -- "In my heart will I build a sanctuary...."

The most potent response to evil is to intensify the good.

The most potent response to godlessness is to strive to become more Godly.

The most potent response to profaneness is to strive for more holiness.

The most potent response to brutality is to increase our mentschlichkeit and sensitivity to others.

When the enemies of civilization attempt to cast the world into darkness, the most potent response is to bring light into the darkness. "And God said, 'Let there be light.'" For our Sages, light is always the symbol of Torah. (Talmud, Megillah 16b and many other sources) "Orah zu torah" -- light is Torah. That is to say, when God commanded light to appear, He really commanded Torah to appear. And when Torah entered the world, true light entered the world. But when Torah goes into eclipse, light also begins to fade from the world.

Those twin shafts of light in New York are a most fitting memorial. They remind us that the ultimate rebuilding of the Twin Towers will take place when we learn to rebuild the inner sanctuary within ourselves through the light that is Torah.

Start at the Bottom

Eaten Up with Envy

The Relevance of Prayer: Ethics of the Fathers, 2:18
For Every Individual, A Torah Scroll
Allegiance To The Monarch
Meet the Real You: Yom Kippur
Comments
MOST POPULAR IN Spirituality
Our privacy policy
Aish.com Is Looking for Great Writers