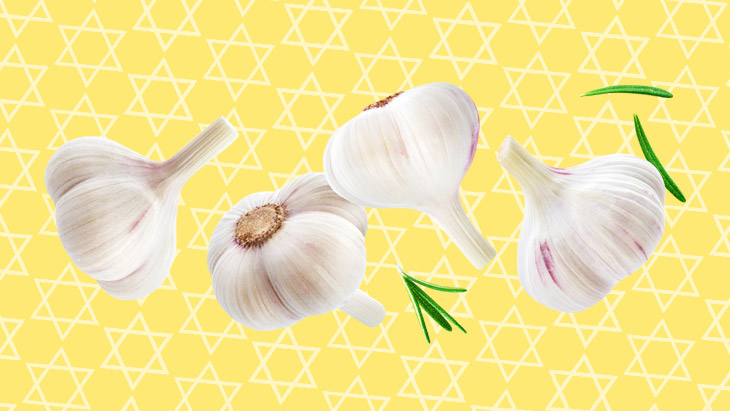 Garlic has long been associated with Jewish life and cooking.

Garlic, a plant that’s native to Central Asia, has long been prized for its sharp, delicious taste. Since Biblical times, garlic has been beloved by Jews, and has also been considered a Jewish food for much of history. Here are six little-known Jewish facts about this pungent food.

Longing for Garlic in Egypt

Garlic was so prized by Egyptian cooks that remains of garlic bulbs have been found in burial chambers. These were meant to be enjoyed by Egyptian noblemen in the afterlife.

After leaving Egypt, the now-freed Jewish slaves still longed for garlic. “We remember the fish that we ate in Egypt,” the freed Israelites complained to Moses as they wandered in the wilderness on their way to Israel: “...the cucumbers, melons, leeks, onions, and garlic.” (Numbers 11:5).

Garlic as a Key Shabbat Ingredient

In ancient times, garlic was a central part of celebrating Shabbat. The Talmud devotes several passages to talking about garlic, explaining that it is a key part of Shabbat meals. “With what does one delight in the day of Shabbat?” the Talmud asks, recording an answer provided by Rav Yehuda, son of Rav Shmuel bar Sheilat, who recalled the words of his teacher Rav: “With a dish of beetroot, and a large fish, and heads of garlic” (Talmud Shabbat 11b). Elsewhere, the Talmud refers to Jews who celebrate Shabbat as “garlic eaters,” so closely identified was Shabbat dinner and lunch with this fragrant vegetable. (Talmud Nedarim 31a)

The Jewish sages ascribed important qualities to garlic: “It satisfies, it warms (the body), it causes one’s countenance to shine... some say that it also instills love into those who eat it and removes jealousy from them.” (Bava Kamma 82a)

Garlic has long been associated with romance – despite its strong smell – and Talmud also describes garlic as way to foster feelings of love. A Shabbat meal containing garlic, in particular, is described as a way to create a romantic atmosphere between husbands and wives on Shabbat. (One 2016 study seems to bear this out, finding that “the odor of people after an increased garlic dosage was assessed as significantly more pleasant and attractive…” The study authors posited that this might be because garlic’s positive health effects make people more healthy and therefore more attractive to others.)

Garlic as a “Jewish” Food

Food historian Claudia Roden explains that “the Sephardim have a reputation as vegetable lovers even by Mediterranean standards.” Jews living throughout the Mediterranean region were strongly associated with the use of vegetables in their cooking – including garlic. In fact, garlic was so popular in Jewish dishes that it began to be considered a “Jewish” food. “Jews were always known as onion and garlic eaters,” Claudia Roden explains. “In Istanbul, when Jews avoided the plague during a terrible epidemic, it was said that the virus did not penetrate the Jewish area because of the smell of garlic.” Jews hung bulbs of garlic outside their doors to ward off the plague as a talisman and sign of good luck.

In some Muslim communities, eating garlic is discouraged and looked down upon. The use of garlic was thus a stark divider between Jewish and Muslim cooking customs, even in areas where Jews and Muslims lived in close proximity to each other.

Gil Marks, another food historian, observes, “Historically, the addition of garlic was among the typical Jewish touches that enhanced local dishes. In many cultures, the presence of garlic marked a dish as Jewish.” Roden notes that stewing meat and vegetables in a sauce made of onions and tomatoes was long seen as a quintessential Jewish way of cooking – the addition of garlic was a common way to add even more flavor to Jewish stews.

The Medieval Italian Hebrew poet Immanuel ben Solomon of Rome, also known as Manoello, penned a comic poem in the late 1200s called From the Hungry, Praise, in which he described the garlic’s role in Jewish eating in extravagant terms: “For heart’s redeemer is the onion...garlic, leek, my peace… Garlic is earth’s stag and blossom…”

The Jewish “Garlic Communities” of Germany

In the Middle Ages, the German areas around the towns of Speyer, Worms and Mainz were home to large, vibrant Jewish communities. A popular acronym for these areas took the first letter from each town – S, W (which is written with a double “U” sound in Hebrew) and M – echoed the Hebrew word for garlic, shoom. The area was known as Kehillas Shoom – the community of “Shum”, or garlic in Hebrew.

So identified were German Jews with garlic that some anti-Semitic images persist from the Middle Ages and Renaissance, depicting Jews holding or posing with bulbs of garlic. Some of these anti-Jewish images show a Jew holding garlic in one hand and a bag of money in the other. 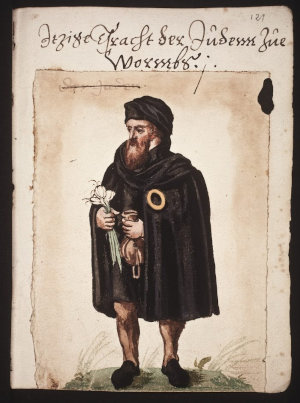 Garlic heads, money bag, and yellow badge as the insignias of a medieval, and here renaissance Jew of the city of Worms. (Wiki Commons: Thesaurus Picturarum of Marcus zum Lamm, March 3, 1544 – February 13, 1606.)

Garlic, Danger and the Spanish Inquisition

By the 1490s, Jews were so closely associated with the consumption of garlic that during the Spanish Inquisition merely eating garlic could draw suspicion and single out Jews for torture and death. Andrew Bernaldez was chaplain to the Archbishop of Seville in Spain during the Inquisition and wrote about the hunting down of Jews that he witnessed in his Historia de los Reyes Catolicos. In it, he chillingly describes how eating garlic could single one out as a Jew.

Bernaldez’s hatred makes his prose difficult to read even today: “Just as heretics and Jews have always fled from Christian doctrines, so they have always fled from Christian customs,” the priest wrote; “They...never lose the Jewish habit of eating garbage of onions and garlic fried in oil…” He singled out the smell of garlic as something that could identify a home as belonging to Jews. Even Jews who publicly pretended to be Christian continued to eat garlic, which Bernaldez viewed as evidence that Jews were continuing to practice their religion in secret and were therefore subject to the violence of the Inquisition.

In some Jewish communities, garlic is associated with good luck and the avoidance of evil. Among Sephardi Jews, garlic was associated with warding off the “evil eye”. In Ladino, the traditional language of Sephardic Jews, the word for garlic, ajo, sounds much like the word for eye, ojo. After complimenting someone, it was customary to ward off the evil eye (thought to bring bad luck) by saying Al ajo ke se la vaiga – literally “let it go to (be absorbed by) the garlic.”

In some Sephardi communities, it was customary to put a bulb of garlic on a pillow next to a baby boy at his bris, and to give out garlic as a gift to guests at a baby boy’s pidyon haben (a ceremony performed with a firstborn baby boy).

In Yiddish, the prominent role of garlic in Jewish culture is reflected in the saying Az men est nisht kayn knobl, shrink men nit – “If you don’t eat garlic, you won’t smell bad.” The meaning is that if you do nothing wrong you’ll have nothing bad to hide.

A Chaplain's Compassion
Is Grease the Word?
Dried Fruit Compote
Scientific Curiosity and the Divine Encounter
Comments
MOST POPULAR IN Israel
Our privacy policy
Aish.com Is Looking for Great Writers