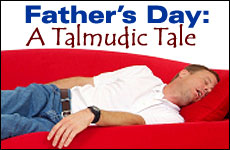 Is honoring parents even more important than money?

Here’s a story that my father told me when I, as a young boy, disturbed his mid-afternoon Shabbat nap once too often. And yes, years later, when my sons woke me up on Shabbat afternoon, I passed this same story on to them.

The Talmud relates the following (Tractate Avoda Zara 24a):

Rabbi Eliezer was asked: How far does one have to respect parents? He said: Go and see what Dama Ben Nisina, a non-Jew in Ashkelon, did for his father.

The rabbis wanted to buy from Dama a jewel of extraordinary worth and beauty to replace missing stones on the High Priest's breast plate. The price was 600,000 gold coins. Dama's jewels were kept in a locked chest. The key to the chest was resting under the head of Dama's father, who was fast asleep. Dama would not disturb his sleeping father, and so he lost the sale.

A year later, God rewarded him. A red cow was born in Dama's herd. (This type of totally red-haired cow was extremely rare. The Jewish people in the time of the Holy Temple used a red cow for spiritual purification rites and would pay a princely sum to acquire it.) The rabbis came to Dama to buy it from him. He told them: "I know you would pay me whatever amount I ask. But I will only ask you for the amount I lost (on the jewelry deal) because I respected my father."

Talmud study is about paying attention to details. Newspapers offer us details of gore and mayhem to sell more papers, and authors provide graphic descriptive details to generate interest and sell more books. The Talmud, though, is about wisdom. When we pay attention to the details in a Talmud passage and then ask "why?" we often reveal a more complete story, a deeper lesson. This kind of mental exercise is perhaps the reason that so many Nobel Prize winners are Jewish: We have learned to keep a sharp eye out, and then to ask "why?"

When we apply these tools of Talmudic analysis, we will discover much more than what meets the eye from a simple reading of the story.

Let's apply logic to the situation. To make it easier we will convert the first half of the story into a modern scenario:

Joe needs to close a million dollar sale by sending a confirmation email at a pre-arranged deadline. His father, Dan, is sleeping in the room where Joe's computer is located. Not wanting to disturb his father's sleep, Joe loses the deal.

When Joe's father wakes up and Joe tells him what happened, what will Dan's reaction be?

YOU IDIOT! WHAT'S THE MATTER WITH YOU? HAVE YOU LOST YOUR MIND?

Any normal father would want to be woken up, with so much money on the line.

Any normal father would want his child to wake him up in this scenario, with so much money on the line. In fact, a child who does not wake up his father would be guilty of acting against his father's wishes and is not honoring him by letting him sleep.

But what if Dan suffered from late-stage Alzheimer's? That changes things, doesn't it?

This was the greatness of Dama Ben Nesina. Perhaps his father was suffering from dementia and was unable to understand the importance of the deal. Nevertheless Dama chose to lose the opportunity to make a fortune, in order to honor his senile father!

Another "why" question: If you are wondering why Dama didn't simply take an ax and break open the chest where the jewels were, you are not alone. One of the great Talmudic commentaries, Tosafos, explains that the key was under Dama's father's head, while the chest containing the jewels was under the sleeping father's feet.

Taking a look at the second half of the story, it would seem that the details of how Dama was rewarded, through the birth of a red cow in his herd, could have been left out. The Talmud could have simply said that he was rewarded by receiving the money anyway. What's the difference if he got rich through the birth of a red cow, winning the lottery, or finding a treasure chest on the beach?

How do you make an event go viral, in an age with no texting or CNN?

The answer to this "why" question has a very contemporary feel: It was good publicity. How do you make an event that God wants everyone to know about go viral, in an age with no texting, CNN or even Aish.com?

The answer is to have an extraordinary event happen that everyone will talk about. In the 420 years in which Second Temple existed, only seven pure red cows were used for spiritual purification. A red cow was big news. Everyone would be talking about it – and thus Dama's extraordinary deed of reverence for his father would be publicized, becoming common knowledge, and used as an example a lesson of what lengths we must go to in our relationship with our parents.

One last question that will offer still more lessons from this "simple" story:

What are the chances that one morning, when the doors of the Tower of London are opened, gems from the Crown Jewels would be missing?

The High Priest's breast plate had twelve jewels, one for each of the twelve tribes. This was a national treasure, presumably well-guarded and protected. And now gems from that holy artifact were lost? How could that have happened? And why?

The breast plate represented the unity of the Jewish people -- twelve tribes united as one. During much of the Second Temple era there were Jewish sects leaving tradition, and a growing lack of unity among the people. The inexplicable loss of the stones was a sort of a text message from the One Above to remind the Jews to work at getting along with each other, and to stay true to our traditions and identity as the key to survival.

Unfortunately, that message didn't get through, and the tremendous conflict between the Jewish people ultimately led to destruction and exile.

The details of this story give us guidelines on expectations when dealing with our parents, as well as a message about the importance of Jewish unity.

Are these two concepts interrelated? I invite your comments.

Ask the Rabbi/Psychologist: My Father’s Affair

Lessons From My Father

A Face in the Window: A Father's Day Tribute
Blocked Goals and Anger
Why the Mezuzah is Placed on a Slant
Faith: the Axis Upon Which the Wheel of Science Turns
Comments
MOST POPULAR IN Family
Our privacy policy