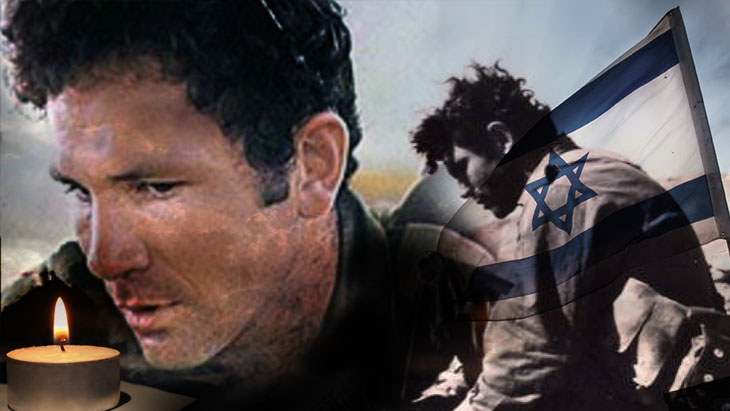 In Israel, everyone is family.

A number of years ago I went to visit my family in Jerusalem and visited Har Herzl, Israeli’s main military cemetery, to give honor to the families who sacrificed so much to protect Israel and her inhabitants.

Yonatan Netanyahu, Bibi's brother, was one of the soldiers who really inspired me. He gave his life to rescue over 100 Jews who were held hostage by terrorists in Entebbe, Uganda. It happened on July 4, 1976. I was a little kid in camp, and when they announced the rescue we danced and celebrated. I didn’t understand the gravity of what had just happened but over the subsequent years, I’ve read a lot about Entebbe and have been fascinated by Yonatan’s fierce devotion to his people which led him to pay the ultimate price.

In fact, Har Herzl is filled with people who paid the ultimate price. I had studied so much about Yonatan that I felt I should visit his gravesite, pay my respects and say a few prayers.

It was drizzling that morning and there were no other visitors at that time. I began walking, searching for Yoni's grave, not having a clue where to go. I saw two workers sweeping and cleaning things up. One was two terraces up from me, and the other was working on my level. I went over to the man and said in Hebrew, “Pardon me, sir. I am looking for the grave of Yonatan Netanyahu. Do you know where it is?"

He turned to the guy working on the upper terrace and shouted, “Dani!”

Dani shouted back, “What?"

I’m thinking to myself, how on earth would Dani even know which Yoni I’m looking for?

Yet Dani pointed straight ahead and replied, "Continue straight until the end of the path, go up the steps, turn right, and that’s where you’ll find Yoni."

I shouted, “Todah! Thank you," and followed his accurate directions, finding the grave in minutes.

As I paid my respects to Yonatan Netanyahu and said some prayers, I couldn’t stop thinking about what had just happened. That phrase “Eifo Yoni? Where's Yoni?” is probably heard around Israel hundreds of times every day, referring to a living friend or relative. Here in Har Herzl, the situation was very different. But you couldn’t tell that from the way these men referred to Yoni with such love as if he was a close, living buddy. He was, even in death, a part of their lives.

When I recounted this story to my brother Avi, who lives in Jerusalem, he told me the following story.

My brother was sightseeing up north in the Galilee and was driving near the town of Chatzor. He noticed the sign for the grave of Choni Hame’agel, Choni the Circle-Drawer, the great rabbinic sage in the Talmud known for his devotion and closeness to God. The Talmud (Ta’anit 23) describes how there was a terrible drought in Israel and people were getting desperate. God seemed to be ignoring their prayers. Choni drew a circle on the ground, stepped into it, and said to God, “I’m not coming out of this circle until You make it rain!”

It began to drizzle. Choni said, “Not that kind of rain!”

It began to pour and flood the land. Choni said, “Not that either! We need a rain that will nourish the crops!”

And the rain changed into one that was optimal for the crops. The rabbis felt that Choni was a bit out of line in the way he challenged God but felt there was nothing they could do; Choni was so close to God that he could get away with this impudence.

My brother Avi entered Choni Hame’agel’s gravesite to say some prayers. It was very quiet, and then an Israeli man came in, reeking of aftershave, with sunglasses on his head. He, too, grabbed a prayer book to say a few prayers, but then his phone rang. He answered. Apparently, a business deal was about to happen and he started barking orders. “Yes, yes, tell them we’ll send both packages later today!”

Avi was getting a little irritated since he wanted to finish his prayers and this man’s conversation was rather intrusive. The man must have come to the same conclusion, so he finally said, “Listen, I can’t talk right now. I’m with Choni."

Avi was struck at how the man referred to this great Talmudic sage as if he were a personal friend. “I’m with Choni.”

Yoni and Choni have more in common than their rhyming names. They rhyme in the depth of their commitment to their fellow Jews and to the land of Israel. Both were heroes who saved their people, one from a massacre, the other from death through drought and famine.

And when you do that, Jews recognize you as family.

A Father's Reality of War
Seeing Without Eyes
Why Shouldn’t We Eat Whatever We Want?
The Power Of Prayer
Comments
MOST POPULAR IN Israel
Our privacy policy
Aish.com Is Looking for Great Writers