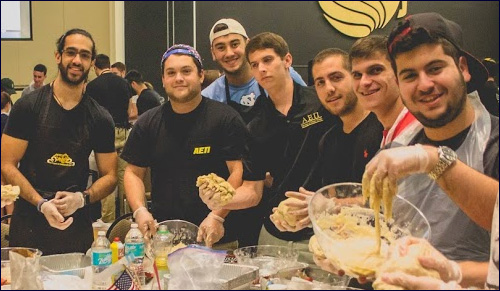 The Shabbat Project brought together a million Jews from all walks of life.

Following one of the most bitter, divisive and exhausting presidential races in the history of the United States, the Jewish world took a well-deserved collective deep breath this past Shabbat.

The 2016 Shabbat Project – now in its third year – eclipsed its predecessors on all fronts, reaching 1,150 cities across the world, and attracting record numbers of participants in many of those cities.

An estimated one million people took part in celebrations on and around the Shabbat of 11/12 November – not just in unique Shabbat programmes, but in city-wide pre-Shabbat “Challah Bakes” and post-Shabbat “Havdallah Concerts”.

"The response to this year’s Shabbat Project has been stronger than ever,” says South African Chief Rabbi Dr. Warren Goldstein, the founder and director of The Shabbat Project. “It has been so inspiring to see how the Shabbat Project connects with millions of Jews from every kind of background, and how people around the world have worked in partnership to make this a sublime moment of Jewish unity, all centered around Shabbat."

An untold number observed Shabbat in full for the first time in their lives. Just as importantly, people of diverse backgrounds and persuasions were brought together in ways not yet seen before.

"We’ve witnessed an outpouring of emotion across the Jewish world, as Jews from all walks of life have embraced the Shabbat Project, putting aside their differences and gathering together in a spirit of love and unity,” says Goldstein. “There is a real thirst worldwide for true Jewish unity and for a genuine connection to Judaism. And people really resonate with the way Shabbat carves out a sacred space of tranquility and togetherness amidst the frenzy of modern life."

Stories big and small are already beginning to emerge from across the globe – 8,000 at a Challah Bake in Buenos Aires… 15 families in the tiny Jewish enclave in Cancun, Mexico, keeping Shabbat for the first-time… 850 Sydneysiders “seaing” in Shabbat at a musical Kabbalat Shabbat service on Bondi Beach… a Shabbaton on board a cruise ship in the Atlantic… a lone Jew in Karachi, Pakistan, keeping Shabbat with the rest of the Jewish world. 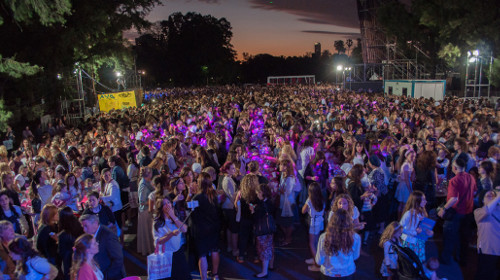 Among the more than 200 new partner cities in 2016 were St Louis (US); Wilhelmshaven (Germany); Gaudelope (a group of islands located in the southern Caribbean Sea); Medellin (Colombia); Lodz (Poland); Alphaville (Brazil); Mbale (Uganda); and Tuscany (Italy).

In the US – from Cleveland to Coconut Creek, Houston to Hoboken, New York to North Druid Hills – there were a total of 543 participating cities.

San Diego was once again among the leaders with tens of thousands of participants. 3,000 people attended three separate Challah Bakes – 2,000 at the headline event held at the San Diego Jewish Academy, where participants stood at rows of tables that lined an entire football field and part of a basketball court. The following evening, an estimated 12,000 people participated in more than 1,000 Shabbat dinners hosted around San Diego County, ranging from big communal sprees to small intimate gatherings in private homes. 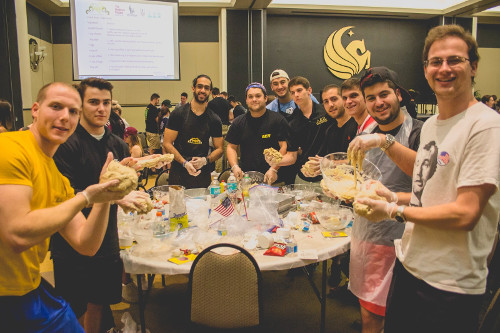 “Going forward, our hope is that San Diego’s spiritual and community leaders will build upon the seeds of knowledge and experience planted within people throughout this weekend,” says Shabbat San Diego co-founder, Selwyn Isakow. “That through educational programs, they will encourage people to deepen their understanding of Judaism, respect one another whatever their affiliations, and contribute towards building a stronger, more vibrant, growing, unified and sustainable Jewish community.”

In New York City, a collection of extraordinary “Challah Bakes” included: a Marine Park melting pot of Russian, Haredi and unaffiliated Jews presenting their ethnic or cultural traditions to each other; a group of diverse Jewish students (Syrians, Bucharians, Persians and Americans) at the Fashion Institute of Technology baking challahs and preparing other foods for solitary Jewish seniors (and then enjoying a Shabbat evening dinner together); and an event in Kensington that saw Kavkazi Jews (hailing from the Caucasus Mountains of southern Russia and Azerbaijan) lead teenage girls from Reform, Conservative, Orthodox communities in baking churek (Azerbaijani flatbread).

“That really touched my heart”

In Israel, Netanya, Eilat, Modiin, Jerusalem, Haifa joined more than 150 other towns and cities across Israel taking part in the Shabbat Project. In many of these locations, it seemed almost every second building was hosting a “Kiddush Binyani”, with residents gathering together for a Shabbat meal in the lobby.

In Tel Aviv, more than a thousand Israelis ate a Friday night dinner together in a shipping container at Namal port. The event – one of over 30 taking place across the city – brought together new immigrants, veteran Israelis, young professionals, senior citizens, celebrities and even members of Knesset. The evening began with a spirited Kabbalat Shabbat and Maariv, and was followed by a three-course meal washed down with whiskey, vodka and some 500 bottles of wine, courtesy of the famed Golan Heights Winery. 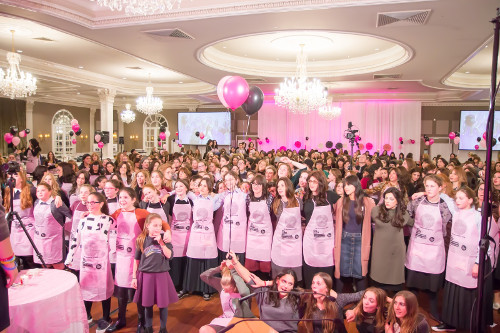 Mor Goshen, from the northern Israeli city of Afula, initially had reservations about spending a Shabbat dinner with so many people.

“For me Shabbat dinners are usually more intimate, spent among family members or close friends,” she explained. “But then I got to the venue and was just so moved by what I saw. This passion to help young olim [immigrants] feel at home in our eternal homeland is contagious and it is also exactly what makes even a thousand-person Shabbat dinner in a huge hangar feel like family.”

But perhaps nothing typified the spirit of the Shabbat Project quite like the Har Nof “Unity Bake”.

The event, led by local icon Tzpporah Heller, brought together more than 700 young, old, religious, traditional, unaffiliated, apathetic, British, Russian, North-, South- and Central-American women from all over the globe – and even some actual Israelis. The program was conducted in both Hebrew and English, and many women in the room were preparing challah for the very first time in their lives.

But it didn't end there.

“Every participant was offered the opportunity to either take their challah dough home, or leave it with us,” explains Rochelle Lev. “We were left with a mountain of challah dough. And as we cleaned up, we baked and baked and baked through the night – several thousand rolls. 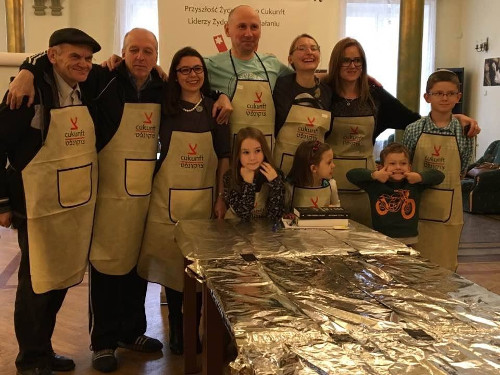 “In the morning an army of volunteers created over 800 packages of challahs, candles, muffins, and other treats that were delivered to the needy and to soldiers in Chevron, Kiryat Arba, and many army outposts in the Gush.

One of the bakers, Lisa Goldenhersh, became emotional when she presented a package – and a warm hug – to a female Ethiopian soldier standing guard in front of the Maarat Hamachpela.

“At another guard post I saw soldiers eyeing the packages and grinning,” she recalls. “That really touched my heart, as I thought of my son, a paratrooper, who had stood guard in a similar alleyway in Chevron, just a month ago.

“On my way home to Yerushalayim, I handed challot to the soldiers at the Tunnel checkpoint. Then, I turned toward Bet Lechem and gave all the police officers and Magavnikim, who were directing the hundreds of people streaming to Kever Rachel on the Yarzheit of Rachel Emainu…”

This is what Shabbat can do

To co-ordinate the global initiative on such a large scale, the head office in Johannesburg worked with around 6,000 partners worldwide – up from 5,000 partners in 2015. 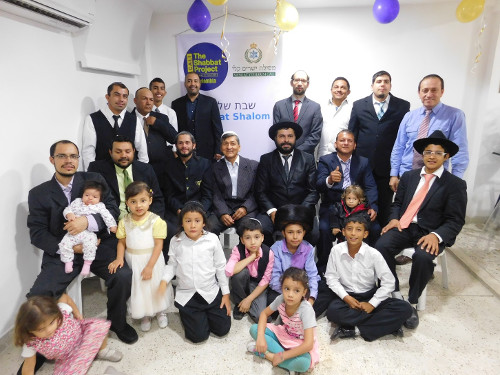 Rabbi Goldstein, who recently debuted at 21 on the Jerusalem Post’s list of the “50 Most Influential Jews” and was dubbed the “Good Shabbat Rabbi”, is driven by a conviction that the two major challenges besetting the Jewish world – assimilation and apathy on the one hand and divisiveness and discord on the other – can be reversed through innovative thinking and “big ideas”.

“Big ideas can change the world and the Jewish world today needs them more than ever. The Shabbat Project is one such big idea: a call to Jews all around the globe to think boldly about our future, to connect across the walls we’ve put up. The Shabbat Project is the story of Jews returning to their roots, reconnecting with Torah, with kedushat Shabbat, returning to their bonds of natural closeness and friendship—all through the Shabbat experience.”

Remembering the 11 Victims of the Pittsburgh Massacre

All Hail the Chief

At the Frontlines in Surfside