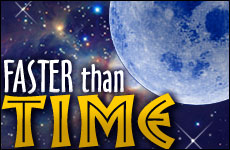 This Passover, achieve the impossible.

The spiritual forces operating at Passover time each year are such that the Jewish people -- and in fact any individual Jew -- can achieve the impossible if these forces are used. An attempt to leap up, to reach a whole new level of sensitivity, of personality development, can have a degree of success if undertaken on Passover which may be far more difficult at any other time.

At this time achievement of many levels of growth in one leap is possible.

There is a special Divine assistance offered at this time which makes achievement of many levels of growth possible in one leap. Under normal circumstances such levels must be painstakingly acquired in gradual sequence. The very word Pesach – the Hebrew term for Passover – means "leaping over"; at a deeper level, the connotation is that of leaping over levels of growth which would ordinarily have to be attained one at a time.

Why do we pray the evening service on Seder night, then? In order to connect ourselves with what is happening in the higher worlds! To bring down some of those very high energies to our level. This night needs none of the usual protection which night makes necessary – it is a leil shimurim, a "night of protection." We are Divinely guarded to an extent which never occurs on any other night of the year. It is truly "different from all other nights!"

So let us ask, with deeper insight, the old question "Why is this night different from all other nights?"

Using the principles we have discussed previously, we can begin to understand that this night must have unparalleled power: on this night, the first Passover sacrifice was eaten. The culmination of the ten plagues, the smiting of the Egyptian firstborn, occurred at midnight. Our homes were "passed over" by God as He smote the Egyptians, Himself personally and not by means of angelic agents. The Exodus began, the redemption was manifest. The redemption occurred with lightning speed – k'heref ayin – like the blink of an eye. There was not time for the bread to rise and it was taken out of Egypt as matzah.

Such events are surely the physical expression of indescribable energies released on the higher plane. What can we understand of the nature of these events and their root? What is the deeper meaning of this speed? Of the nature of matzah?

Let us start by asking a question which has bothered some of the more recent commentaries. There is a well-known idea that the Jewish people in Egypt were on the 49th level of impurity and had to be redeemed, because had they remained in Egypt any longer they would have sunk to the 50th level from which there is no return. The redemption occurred when it did because there would have been no Jewish people to redeem had G-d delayed at all. We were saved at the last moment possible. This idea understands that at the very last moment in Egypt, the moment just before the Exodus, our existence was critically in the balance – one moment longer and it would have been too late.

The problem is, though: How could one more moment of time in Egypt have caused us to disappear spiritually, to fail and fall into Egyptian impurity? That last moment was the greatest moment we had ever experienced, it was the instant of highest revelation, supercharged with awareness of God's closeness. That moment of midnight was incandescent with purity. It was the climax of a process which had begun months before with the first of the plagues at which time the slave-labor had ended. The subsequent plagues were appreciated by the Jews as ever-increasing revelations of God's guidance of world affairs. This night was the pinnacle of that process.

How is it possible to conceive of the imminent disintegration of the Jewish people into impurity and oblivion by a prolongation of that state of being? It would seem that more of that intensity of revelation would have transformed people into angels!

The sources which deal with this idea understand that what is being referred to here is literally one more moment in that state. Not more time in the previous phase of slavery and persecution in general, but very specifically more time on that last night in Egypt. What is the answer to this problem?

An approach to this question is found in the deeper Jewish sources. There is an idea that one can live in the physical dimensions of space and time and be subject to them, part of them. Or one can live within them and yet transcend them. To do this, one must minimize the contact between oneself and the physical elements. In the time dimension, this is known as z'rizus – zeal or alacrity – in performing God's commandments.

spiritual life is generated in the almost infinitely short-lived moment of the flash of conception.

The 16th century Maharal explains that if one moves fast, minimizes the time taken for action, one can overcome the stifling effects of time. Of course there is always a finite time needed for action, but the point is that spirituality is contradicted by unnecessary expansion of the physical dimensions of space and time. The minimum time needed is not a contradiction to spirituality at all, In fact zealous action elevates the physical dimensions to a spiritual level. Since the spiritual world is above time, explains the Maharal, we can make contact with it by coming as close as possible to it by our efforts, by shrinking the physical component of our actions to the absolute essential minimum.

Put another way: Laziness, or the slowing down of action, the expanding of the physical dimensions, makes us part of those dimensions. Sluggishness is the opposite of spirituality. Laziness is incompatible with spiritual growth.

What is meant here is that spiritual life is generated in the almost infinitely short-lived moment of the flash of conception, the male phase of reality. The work of the female phase is to maintain the spiritual energy of that first phase and to bring it into the finite world. But this can be done only if the creative conception phase is electric, alive, unburdened by physical heaviness.

Let us strive to understand. The redemption had to occur k'heref ayin, in the blink of an eye, because that alacrity is necessary for an event to remain spiritual. Had we left Egypt slowly, naturally, in a relaxed fashion, we would have been a natural people! The Jewish nation was being born then; the moment of birth had to be transcendent because "Everything goes after the beginning." We became and remain a spiritual people because our beginning was spiritual. Our moment of formation occupied the absolute minimum of time, and since then we have lived on the edge of the physical universe, at that edge which interfaces with the transcendent, the Divine.

The terrible danger of more time in Egypt would have been the time itself; that is the impurity which is meant here, the impurity of a nation destined for spirituality becoming merely physical, merely natural.

And that is the secret of Passover – riding the wave of minimum time. Overriding time. We left Egypt too fast for the natural to take effect. Too fast to be in danger of becoming slowed by friction with the natural world. Too fast to be slowed into the material and the finite. Too fast for dough to rise, for the food which sustains our lives to expand into the swollen, bloated dimension.

A people only just within the physical, sustained by a food which is only just the sum of its ingredients.

If we think a little further: what is matzah, one of the central commandments of Passover? What is the difference between chametz (leaven) and matzah? Only time! Not a difference in ingredients, only a difference in time. Flour and water if baked within a certain minimum time become matzah. A second's delay beyond that minimum: chametz.

And what a difference: eating matzah is a positive mitzvah of the Torah, its reward is immeasurable. Eating chametz is a prohibition of the Torah and its punishment is spiritual excision! Literally the difference between life and death, rooted in a few seconds of time.

This is the secret of the statement of the Sages: Mitzvah haba'a leyad'cha, al tachmitzena -- "When a mitzvah, a commandment, comes to your hand, do not let it become stale" (literally "do not let it become chametz, sour"). U'shmartem es ha'matzot – "And guard the matzot," which can be read as "And guard the mitzvot". No mere play on words; the idea here is that just as matzah becomes chametz if left too long, so too a mitzvah, spiritual life for the one who performs it, becomes chametz, fermented, sour, if it is allowed to become part of the natural.

A mitzvah is a physical action containing unbounded spiritual energy, but it should be performed thus. If it is performed as no more than a physical action, it may lose its connection with the spiritual world. Mitzvot are like matzot: performed at the higher level, with zeal and alacrity, they are transcendent. Performed sluggishly, slowly, they sour.

The first night of Passover. Incredible energy, incredible opportunity. A time of transcendent beginning. A time to inspire children, beginners in spirituality. A time to be inspired. A time to reach for the impossible, to reach above time.

Excerpted with permission from "LIVING INSPIRED" Published by Targum Press.

Akiva Tatz is a world-renowned lecturer on Jewish thought and philosophy. He is the author of Worldmask, Living Inspired, The Thinking Jewish Teenager''s Guide to Life, and Letters to a Buddhist Jew, published by Targum Press.

Passover’s Secret of Success
Why My Iranian Mother Didn’t Want Me to Become a Religious Fanatic
The Jewish History of Prague
Why the Sexual Revolution was Bad for Women
Comments
MOST POPULAR IN Passover
Our privacy policy
Aish.com Is Looking for Great Writers