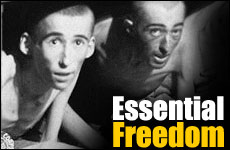 How could anyone celebrate Passover, the holiday of liberation, in Auschwitz?

Sitting round our Passover table a couple of years ago, one guest talked about the tremendous self-sacrifice some Jews went through to observe Passover in the Nazi camps. Flour had to be smuggled in, then hid from the guards and baked into matzah (unleavened bread eaten on Passover) - all under the risk of being killed if discovered. In fact, in one such recorded case the Nazis caught a young man smuggling in flour to one of the ghettos and knocked all of his teeth out as a punishment. Courageously undeterred, our hero still had the determination to liquefy his matzah and drink it.

After telling me these stories, our guest turned to me with a question: “Passover is the festival of freedom, right?’

“Right,” I answered, knowing that I was about to be hit with something unexpected.

“We celebrate our freedom from slavery in Egypt and we celebrate being free people,” I added.

She proceeded to ask, “So how could anyone possibly celebrate Passover in Auschwitz, Majdanek, Treblinka and any of the places that were the exact opposite of what freedom is all about? How can anyone celebrate freedom at the height of sub-human constriction and slavery?”

The answer sheds some light about what the freedom of Passover is all about. But first, we need an introduction.

People have some qualities that are central; they are part of their essence. These essential traits might be covered up by peripheral traits or circumstances but they exist nonetheless. Most importantly, a central trait will ultimately outlive any peripheral interruptions. For example, let’s take Bob. Bob is a kind person; he has an innate disposition towards care and empathy. Yet from time to time Bob gets angry and happens to offend someone. We wouldn’t describe Bob as an angry person. His central trait (or essence) is kindness; anger is just a temporary interruption. The yardstick is that Bob’s kindness will outlive any angry blips – his essential quality will come through.

Another example: A good marriage can often have times of tension and arguments. But if the two people love each other and know they can get along then the essential description of the marriage is a good one with any blips being purely peripheral. Again, the quality of love and ability to get along with each other will (should) outlive any temporary blips.

A story is told about the Rambam (one of the foremost Jewish authorities and philosophers), who demonstrated this concept several hundred years ago as the royal doctor and adviser to the king in Egypt. He argued that some traits cannot be changed; they are ingrained and can be directed, but not fully removed. One example he gave was that animals will never match human etiquette; their basic animal instincts belie this. Now one of the Rambam’s (jealous) opponents in the royal court set out to prove him wrong. He hatched a plan. He decided to train cats to act as waiters. He began by training the cats to stand on their hind legs, then put mini-suits on them, and finally trained the cats to carry small trays. This opponent then arranged a public audience with the Rambam to show him his feat and prove him wrong.

As the Rambam entered the room the cats indeed stood up and began carrying the trays towards him, dressed in smart suits. The Rambam removed a box from his pocket. Placing the box on the floor, he opened it and out crawled a mouse. Panic reigned, as the cats quickly forgot about their suits and trays, and scampered after the mouse. “A cat is a cat and will always be a cat in essence,” the Rambam remarked, before striding out of the room.

On Passover we celebrate the essential quality called freedom. When we were taken out of Egypt (the foremost empire of the time, from where it was unprecedented for any slave to escape) we were not only physically taken out of slavery, but we were redeemed in a real and internal fashion. The quality of freedom became part of our national identity and essence. Therefore, we knew that any oppression, slavery or constriction we’d face from then on throughout history would be temporary by nature. For freedom is one of our essential qualities - and essential qualities live on to express and re-express themselves.

On Passover, the quality of freedom became part of our national identity and essence.

How fitting, then, to celebrate our essential quality of freedom in places of darkness and ultimate constriction. For it’s very easy to celebrate freedom in a free, democratic country where freedom of movement, religion and speech are constitutionally-enshrined and taken for granted. But celebrating freedom in the midst of the Holocaust means to celebrate a real, essential quality of freedom. Some Jews who celebrate Passover today still live without full freedom in any real sense: fear of persecution and anti-Semitism hovers over them. But they still celebrate Passover because they realize that freedom is part of very essence. Oppression is by nature a temporary fixture - it will come to an end soon. They celebrate that Auschwitz is temporary, but the Jewish nation and its quality of essential freedom is permanent.

Rabbi Avraham Yitzchak Bloch, head of the famed Telze Yeshiva in pre-war Europe, was taken out into the woods along with the rest of his townsmen by the Nazis. Knowing what was about to come, Rabbi Bloch demanded that he should be able to say some last words. He proceeded to guide his people to have faith in God even in the darkest of times. After the speech was over, a Nazi soldier turned to him and with a menacing look, barked “Where is your God now?!”

Rabbi Bloch calmly responded, “He’s not my God. He’s your God too. And one day the whole world will recognize Him.” Those were Rabbi Bloch’s last words. And there is no bigger act of recognizing and celebrating an essential, eternal quality of freedom than that.

Rabbi Daniel Fine teaches in Aish's post high-school Gesher program. He has just released his two-book box-set Journey through Nach – making Nach relatable and understandable for the English-speaking public, through chapter summaries on every chapter in Nach, divrei torah, maps and charts. To order a copy visit http://www.feldheim.com/journey-through-nach-2-volume-set.html .