Goering and My Grandmother 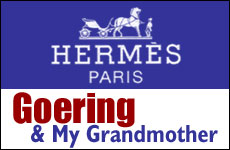 Leading a secret life as a Jewish resistance fighter, you just never know who you're going to meet.

My grandmother is one of the most fascinating people I know. Me'me, as we called her, fought in the French resistance, ran a DP camp in post-war Europe, was a professor in Columbia University and has traveled the world extensively.

My Me'me was living in Paris while it was under Nazi occupation. She was working with the French underground smuggling Jews out of the occupied zone of France into the free zone. She had been an emerging actress in pre-war Paris, and came from a family of well-heeled diplomats. A very attractive young lady, my grandmother was comfortable among the more glamorous echelons of society. She was "well appointed with the finest of accoutrements." Suspicion would be aroused if she were to suddenly start leading a more understated life, so she continued to shop at the finest boutiques in Paris while leading the secret life of a Jewish resistance fighter.

My grandmother was not going to let half a platoon of Nazis stop her from getting her Hermes gloves.

One day my grandmother excitedly set out to Hermes' flagship store in Paris to pick up a pair of gloves she had ordered. Much to her consternation, the entire street was blocked off by German military vehicles. My Me'me is not one to get thrown off a mission easily. She was not going to let half a platoon of Nazis stop her from getting her Hermes gloves.

She also happened to know Paris like an accountant knows a calculator, so she simply went through a few back alleys and arrived at the back exit of Hermes, where the employees (in Hermes they are called personal shopping executives) would come in. She let herself into the store, and immediately discovered why the street was blocked off: Hermann Goering, the second most powerful Nazi and commander of the Luftwaffe, was shopping in Hermes. The whole store was filled with Nazi officers and bodyguards!

Cold fear coursed through her, as well as the repulsion of being in such close proximity to someone so intimately involved in the butchery of her people. But she quickly calculated that her best move would be to pretend like everything was normal and go about her business with no hint of fright or hatred. She walked up to the counter and asked for her gloves. The Hermes employees assumed she was an accompanying celebrity or official and assisted her expediently.

As she was exiting, she came to a narrow point in the store where only one person could walk through at a time. Right then, Goering was headed in the same direction. Who would go first? (They couldn't even possibly squeeze through together, because, as my Me'me told me, "Goering was a very fat man.") Goering, ever the effusive and charming gentleman, motioned for my grandmother to go first with a sweet, "Ladies First." She went through and left the store, and continued smuggling Jews out of the danger zone, now with a new pair of Hermes gloves.

"Never confuse culture with morality," my grandmother told me. "Did Goering have culture? Sure! He was of aristocratic heritage. He was a patron of the arts and attended opera, and he probably cried while listening to Wagner's beautiful compositions! And he most certainly always let the lady go first. But did he have morals? Not a shred! He was the highest official in the Nazi hierarchy to authorize on paper the Final Solution. Morality and culture have nothing to do with each other. Decency and morality come from a divine source, and no amount of culture can substitute for that."

We can see the same lesson in the first of the Ten Commandments, "I am the Lord, your God, who took you out of Egypt, the house of slavery." It sounds redundant; we know that Egypt is the house of slavery! Perhaps God is telling us, look at the Egyptians, the pinnacle of culture in the world. They have papyri, pyramids, incredible embalming technique, astrology, art, hieroglyphics, brain surgery, and achievements in every field imaginable, yet they are still the house of slavery, the place in which your male children were thrown into the Nile, your babies stuck in the wall as bricks if the parents didn't make enough bricks themselves. God is telling us that if we want to simply follow the prevailing dominant culture, then we may end up being the most cultured barbarians in the world.

Behind many great civilizations you will find incredible barbarism. The Greeks and Romans clubbed their children to death if they were born with any deformity or, sometimes, just for being born female. They would cheer gleefully as they watched thousands of people kill each other in "games" at the coliseums. The Germans were the most cultured people in the world with their composers, scientists, poets, and scholars leading the world in achievements, yet we saw what they were capable of in the Holocaust.

On Passover we celebrate the Jewish people's redemption from a place of mere culture to a world of morality. They left behind the pyramids, hieroglyphics, advanced agriculture, and music of the dominant culture, and went out to the desert to learn the ethical precepts of genuine humanity and civilization, from the only true source, the Creator of humanity.

On Passover our mission is to see ourselves as if we are leaving Egypt. We must walk in the very same footsteps as our ancestors did, turning away from the dominant culture, refusing to think that it is automatically right because that is "culture," and instead turn to the divine moral code of the Torah. This is how we discover real freedom and liberate our souls from the shackles of "cultural servitude."