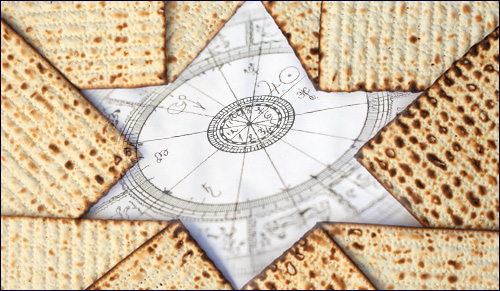 Slaughtering the Pascal lamb represented breaking free from predetermined forces beyond our control.

Do you look at your horoscope in the pages of your favorite newspaper or magazine? If you’re dating, do you make a point to ask the person you’re interested in for their astrological sign? Do you identify your personality with the traits commonly attributed to those born under the influence of one of the 12 signs of the zodiac?

Do you think there is truth in the words of Shakespeare that “the stars above govern our conditions”?

About 90% of American newspapers carry horoscopes. According to the latest studies, at least 90% of all Americans under age 30 know their sun-sign and there are more than 10,000 practicing astrologers in the United States and Americans spend more than $200 million annually consulting astrologers.

Historians tell us that astrology is almost certainly the oldest and most widespread of all pseudo-sciences whose origins can be traced back to the first half of the Hammurabi Dynasty in Babylonia about 3500 years ago. Yet paradoxically the heyday of astrology was not during the ancient days of scientific unawareness nor the benighted Middle Ages, when the average person was sunk deep in ignorance and superstition, but rather in the 20th century as well as in our own, when most citizens presumably know the basic facts of astronomy and are aware that the planets are worlds similar to the earth rather than independent forces that consign us to predetermined fates.

Our Hebrew ancestors in Egypt, those whose journey from slavery to freedom we commemorate on the Passover holiday, lived in a culture obsessed with the rule of the stars and the power of the planets to predict the future. The Torah tells us how Pharaoh sought out his astrologers in order to divine the true meaning of events.

It is in this context that biblical commentators understand the seemingly strange ritual demanded by God of his people in order to warrant their deliverance.

God told Moses to command the Jews to take “every one of them a lamb for each parental home, a lamb for a household” (Exodus 12:3). They were required to slaughter the lamb and to smear of its blood on the two door posts as well as on the lintel. Only then would God “pass over” the homes of the Hebrews whose firstborn lives the Almighty would save.

Obviously God didn’t need a painted sign to determine whether a home was occupied by an Israelite. This was meant as a test. The lamb was a major god of Egypt. To be saved one had to demonstrate in a public manner the rejection of the Egyptian idol. Only those who had the courage to do so deserved to be redeemed.

It’s striking that the Egyptians chose a lamb as a major god to be worshiped. What could have prompted a warlike nation known for their military prowess by way of horses and chariots to revere such a seemingly docile and peaceful animal?

The great Jewish scholar Nachmanides provides us with a brilliant answer. The very first sign of the zodiac is Aries – the ram or the lamb. Being first, it is the key to all the signs which follow; it is the source of strength for the other 11 signs of the zodiac.

And that is why the ancient Hebrews had to slaughter the Paschal Lamb. It was the most powerful way to express their rejection of a system of thought that placed human action under the power of celestial planets, a belief that runs counter to the idea of human free will that is so fundamental to the theology of Judaism.

Astrology turns us into puppets, perpetually moved by strings that can’t be influenced by our own personal desires or strengths of will.

On the holiday of Passover, dedicated to celebrating the ideal of human freedom, the Torah included the concept of liberation not only from human taskmasters but also from pre-destined decrees from planetary forces totally beyond our control.

To put it succinctly, to believe in astrology and the zodiac is to remain a slave – a slave to a fate over which we have no say and which we are not free to alter by our good deeds, by prayer, or by repentance.

Astrology turns us into puppets, perpetually moved by strings that can’t be influenced by our own personal desires or strengths of will.

How remarkable in this light are the words of God to Abraham in the famous scene at the “covenant between the pieces:” “And He [the Lord] brought him forth outside and said, ‘look now toward heaven and count the stars’” (Genesis 15:5). The Midrash has Abraham respond, “According to the astrological signs, I have seen that I am not fit to beget a son.” Whereupon God taught Abraham that he was elevated above the stars and said, “Come forth out of the constellations; the Israelites are not subject to the planets. The servant of God is not enslaved to the stars.”

Judaism does not agree with the ignoble Edmund in King Lear who said that, “We were villains of necessity, fools by heavenly compulsion, knaves, thieves and treacherers by spherical predominance, drunkards, liars and adulterers by an enforced obedience of planetary influences and all that we are evil is by a divine thrusting on.” That would make us no more than pawns in a divine chess game with responsibility for our every move transferred solely to the Chess-master from above guiding our play.

And that is the real meaning of the famous Talmudic statement by Rabbi Yochanan that “There is no mazel to Israel” – not that we have no good fortune but that Israel is not subject to mazel, to predetermined forces beyond our control.

It is a powerful proclamation of freedom for us as actors on the stage of history, as movers for the improvement of the world as we make our way through the free willed choices of our lifetimes.

Although the lack of our temple prevents us from physically sacrificing a Paschal Lamb, it is important for us as we approach Passover to metaphorically slay the excuses we give ourselves for our imperfections as being predetermined. We need to remember that we are free – free to be the heroes of our life stories.

Because it is not the stars that write the scripts of our years. It is we who can choose to become the stars of our faith and our people.

The Miracle of the Red Sea in Our Lives