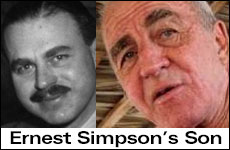 The story of a scuba diving Brit with Jewish roots and a connection to the British Royal family.

“Hello, sorry to bother you. My name is Aharon Solomon and I understand you lead deep-sea diving expeditions in Eilat?”

I took a deep breath to avoid laughing. I’ve been asked many things in my life but no one’s ever asked me to lead a deep sea diving group in Eilat. Oh did I mention I can’t swim? Did I tell you that live fish, scare me. When I take the children to an aquarium I stand well back in case the fish manage to get out… so ME …deep sea diving?

But being a polite lady I answered calmly.

“I think you have a wrong number”

“I don’t think so – you’re Ann aren’t you. I got your number from your agent in London.”

“You haven’t been speaking to anyone recently about diving in Eilat?”

Now, there he had me. Yes I had. As a writer of travel articles about Israel I speak to many people about activities I would never dream of participating in.

I explained that I was a writer and that I had spoken to someone about diving but I didn’t actually organize trips myself.

“Well I do. I’m a freediving instructor. Wait a minute. You’re a writer. Are you the writer who came out from England to Mexico to interview me?”

I was getting lost and confused very fast. Eilat okay, but how did we get from Eilat to England and Mexico?

“Because you discovered who I am?”

This was totally irresistible. “And who are you?”

“The son of Ernest Simpson. You know the man who was married to Wallis Simpson who married the King of England, King Edward, and then he had to abdicate because he wouldn’t give her up. Ann who interviewed me was the first person who had ever discovered my secret and interviewed me.”

Even I have my limits of suspending disbelief. I decided this crazy conversation had really taken a turn in the direction of totally off-the-wall.

But I’m still a polite person by nature and I didn’t like the idea of just putting the phone down on him so I asked innocently. “But I thought you said your name was Aharon Solomons.”

“Yes I changed it back to Solomons after my father died. Then I came to Israel and enlisted in the IDF.”

This was more than too much.

“Look I didn’t come out to Mexico to interview you and I don’t run diving tours in Eilat so I think you’ve just made a mistake. Have a good day.”

I put the phone down and stared at it. Now they often say that in books and I think they’re crazy, I mean who stares at phones – but I really did. As though all this nonsense was the poor telephone’s invention.

But the trouble with being a writer is that you know that truth is frequently stranger than fiction. Unlike financial deals which, we all know that if it sounds too good to be true it probably is, if a story sounds totally implausible…it’s probably true.

I don’t know what I’d have done 30 years ago. Probably had several sleepless nights, just wondering – but today with the internet you don’t need to wait more than the few seconds it takes to ‘Google’ something.

But where should I start? Simpson, Solomons, King Edward, diving, Eilat, abdicating the throne?

My first hit was Wikipedia with the name Aharon Solomons… and it confirmed everything he had said. But who believes Wikipedia? I mean he could have put all that stuff in himself.

That morning there wasn’t much else on Google about my new acquaintance so I was wondering where to search next when a few minutes later an email arrived. It was my e-edition of the London-based newspaper, The Jewish Chronicle. The main headline read “Revealed: Wallis Simpson’s Jewish Secret”.

Unbelieving, I read through the article. Written by Anne Sebba, (no doubt the writer Anne, that Solomon had remembered,) the article was about the new biography of Wallis Simpson that Sebba had just written. Her breakthrough had come, it said, when she traced freediver Aharon Solomons, son of Ernest Simpson, the husband Wallis divorced in order to marry King Edward.

Ernest Simpson was born into a religious German Jewish family of shipping traders.

Ernest Simpson, it appeared, had been born into a religious German Jewish family of shipping traders. His grandfather had moved to Plymouth U.K. and during the ensuing years his father had dropped the yoke of Judaism, changed his name from Solomon to Simpson and gone to live in the USA. He married in America and Ernest was born who when given the choice, decided he preferred to return to Britain. He had hidden his Jewish origins and was accepted into upper class British society and married his American wife Wallis.

After he and Wallis divorced (in order to leave her the opportunity to marry the British heir to the throne,) Simpson married his ex-wife’s best friend Mary Raffray and they had a son whom they christened Ernest Henry Child Simpson.

According to Sebba, Henry was packed off to boarding school when his mother died two years after his birth and he grew up in boarding schools never having any idea of the scandal that had surrounded his parent’s marriage.

He was a sad, virtually homeless child with no connection to his family so it’s doubtful if he felt too much of a loss when his father died when he was 18 years old. However shortly afterwards his aunt, his father’s older sister, decided it was time to let young Henry in on all the family secrets.

For the first time in his almost entirely institutionalized life, ignored by his family since his father’s remarriage, young Henry was thrilled to be told that at last he belonged somewhere— he felt he belonged to the Jewish people. He was no doubt totally unaware of the fact that according to Jewish law he is not Jewish, as Judaism goes according to matrilineal descent and his mother was not Jewish.

He changed his name back to Solomons, (the addition of the letter ‘s’ at the end was simply a mistake on his part) took the name of Aharon and moved to Israel where he enlisted in the IDF and fought in the Yom Kippur war. For many years he taught scuba diving in Eilat and later moved to Mexico where he learnt, and later taught free-diving.

So, if not for a Google search after a chance phone call, I might have forever believed that there was some poor deluded freediver living in Eilat/Mexico who believed he was connected to the British royal family.

Trading Lives with Larry David
Why Are The Prayers Of Yom Kipur So Repetetive?
Ha'azinu 5783: A Time for Unity!
Twisted Thinking
Comments