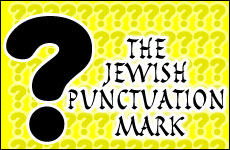 Why are our questions different from all other questions?

As a people, we Jews love asking questions. A non-Jew eavesdropping on a conversation at a Jewish function, or accidentally deposited in any yeshiva, might well be excused for assuming that Jewish day schools taught only one punctuation symbol: the question mark. And if a befuddled non-Jew might ask a Jew, "Why do you people always answer a question with another question?" we can already hear the member of the tribe retort slyly, "And what's wrong with questions?"

"And what's wrong with questions?"

Of course, nobody asks questions more incessantly than kids. I confess that when my kids were small, they stumped me regularly while asking perfectly reasonable things, such as, "Mommy, why is the sky blue?" Unfortunately, I didn't have a snowball's chance in Haiti of answering intelligently, since I rarely paid attention during science class. (Parenting tip: Never, ever admit something like this to a 6-year-old.) While I felt a mother's pride in her precocious progeny's inquisitive nature, I was also gripped with fear that I was about to be tossed – summarily and prematurely -- from my perch as the All-Knowing Parent, which, let's face it, is an extremely temporarily position as it is.

"Let's have fun looking up the answer together in our 'Big Book of Why,'" I'd say, hoping that I hadn't loaned that essential volume to another parent who had also frittered away her time daydreaming during science class, counting the minutes to recess or lunch, whichever came first.

Sure I have questions that grip my imagination, but most of them never become fodder for books. For example, I have a deplorable lack of curiosity about the ongoing battle among academicians over whether Shakespeare really wrote all the works attributed to him, or if some were written by Christopher Marlowe. Proud English major that I am, if someone proved that King Lear had been written by Marlowe, or even the much-lesser known 14th Duke of Hasty-Pudding-Upon-Wyre Piddle, I would still rather read the play than the book about the argument. Similarly, I'd likely be more spellbound by the local phone directory than a book trying to explain what really happened at the battle of Little Bighorn. And as for those who listen to obscure AM radio stations and passionately insist that there are UFOs flying over Roswell , New Mexico, please. Don't drey my kop with this kind of narishkeyt. Unless the UFO pilot is available to join my carpool and save me some drives next year, I'm not interested.

This question about questions is pressing now because there are four very famous ones that will serve as the launching point for the Pesach seder. But even though I'm supposed to be focusing on those loftier inquiries and about the meaning of freedom, why we need to drink four cups of wine, and why there are four sons involved in the Hagaddah, I can't help but find myself vexed by other, smaller mysteries that arise as I clean and hunt for chometz. Finding answers to them has proven more elusive than finding a private dressing room at Loehmann's.

For example, what really happens to that matching sock when it goes into the wash? (And the logical follow-up: why have I not learned to buy only black socks or white socks, but still pony up for a nice blue Argyll or speckled cable knit?) Why can I only fish out the pen cap from my purse, but rarely the actual pen? Why do the flotsam and jetsam of domestic life, which I had specifically designated for one kitchen "junk" drawer, sneak out in the middle of the night and establish eminent domain in a second, completely unauthorized junk drawer? Why is my washing machine still making groaning noises after I just paid 300 bucks to a surly Russian repairman who impatiently said "for sure" it would run quietly now? And why will my family enthusiastically eat a wide variety of foods when it is called "dinner" but mutiny against the very same when it is called "leftovers?" I don't know about you, but I have yet to hear a remotely satisfying answer to any of these questions, which are a lot more relevant to my life than whether UFOs are flying over Roswell .

I'm going to blame this not-so-magnificent obsession on the yetzer hara (evil inclination), that rascally creature, always skirmishing with my yetzer tov (good inclination). That pesky yetzer darned well knows that this is the season to focus on the heavenly, not the humdrum. I am trying to tamp that yetzer down so I can focus on the really important questions, such as why will this night be different from all other nights? What's the significance of all those plagues, and of the four cups of wine? How will know if we really understand what it means to be free?

I'm getting excited to discuss all these ideas at the seder. Because after all this cleaning and cooking, part of the joy of Pesach will be feeling liberated – at least for those nights -- from wondering about the mysterious destiny of the missing sock.

With so many excited Jews at the table, all eager to toss out their own questions and answers about the exodus, it'll be a challenge to get a word in edgewise. Which leads me to wonder: Why are Jews so genetically wired to keep on asking question after question?