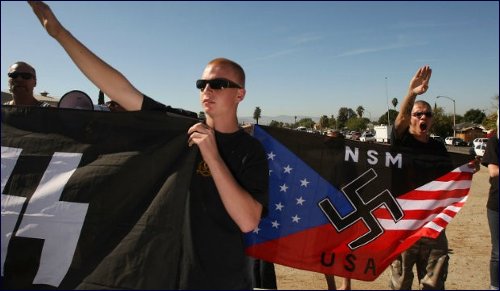 We fought back with singing and demonstrating our Jewish pride.

Thursday, April 20th, was a bright, sunny day at the University of Oregon in Eugene.

It was also the birthday of Adolf Hitler (yimach shmo).

I was inside the Student Union building as usual, meeting with one of our students, Noah. Suddenly, another student of mine, Allie, rushed over to ask me if I had seen what was going on outside.

Two self-described “white nationalists” (read “Nazis”) had driven on to the campus in a van with a huge white swastika painted on a bright red background. They had parked the van outside the campus student union and held signs targeted specifically against the Jewish people. 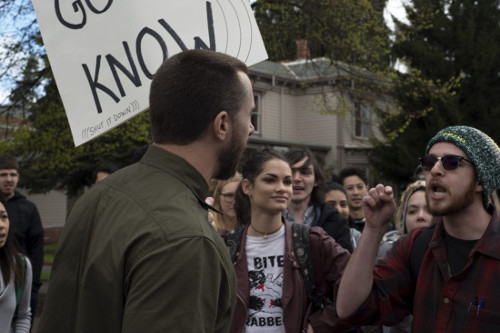 Noah and I ran to the huge glass windows to see the shocking sight of these neo-Nazis surrounded by well over a hundred students of all backgrounds. Most were just standing glumly in front of the two men, some were crying, and many were screaming at them to get off the campus.

Noah and I looked at each other and knew instantly we had to do something. Only with God’s help did I have the courage walk right outside, straight through the crowd, and right up to the neo-Nazis.

I began to sing “Am Yisrael Chai” and started dancing with students.

The crowd went silent. I was clearly their target audience. But I thought the neo-Nazis didn’t deserve the slightest bit of attention.

I turned to the crowd and began to sing “Am Yisrael Chai” (Hebrew for “The Jewish people live!”) and started dancing with students. 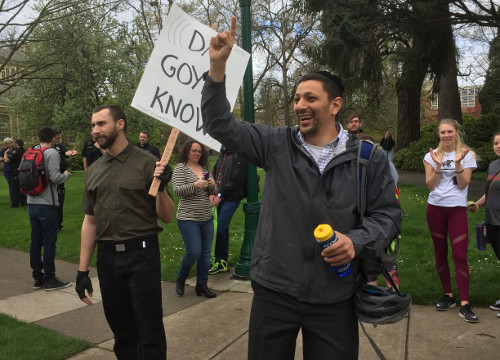 The spirits of the crowd were lifted. Every time I finished the sentence of the song, the crowd responded with a roar, singing together “Chai!”

Journalists and students were waiting to meet me and thank me. "That's the way to fight,” I said. “With happiness, with singing, with Jewish pride."

I told them, "For me, the biggest pride is to stand here and say, ‘the Jewish people are still alive.' We're still going, we're still strong." I told the students that proudly living our Jewish lives is an embarrassment to those who want to destroy us. I reminded them that the Babylonians, Persians, Greeks, Romans, and Nazi Germany had all tried to kill us, but they are gone and we are still here, alive and strong.

Only afterwards did I realize the scale of what had happened. My phone didn’t stop receiving messages. Our social media went viral. Many people kept coming up to me asking if I was the rabbi in the news article that appeared later that day. People donated money to our organization, Akiva on Campus, to show their gratitude for what I had done.

I was reluctant to share this story about myself but I do feel the need to share our pride. The pride that we are alive, vibrant, and will not go away. Growing up I was taught that history repeats itself, and the story of Jewish survival, while our haters have perished, surely testifies to that.

The neo-Nazis expected us to get angry and curse and shout at them. But that doesn’t demonstrate strength; the reality is that it only shows weakness. We didn’t stoop to their level. Our response was positive, uplifting.

We need to feel proud to be part of the Jewish people and what we believe in. We need to affirm our own values before we try to influence others.

Yes, history repeats itself. Tell that to the Iranian regime, Hamas, Hezbollah or anyone else that doesn’t like us: Am Yisrael Chai! We are not going away, we are alive, and we are awesome.

Rabbi Jack Melul together with his wife Shira and his three children moved to Eugene Oregon over 4 years ago. They are the founding directors of their organization Akiva on campus inspiring hundreds of students all over the state of Oregon. Rabbi Jack also serves as the rabbi at Eugene’s only Orthodox synagogue Ahavas Torah. Shira is also the NCSY director in Eugene. They will be moving to Aish LA this summer.

Gilad Shalit and the Sea Turtle

Hating Israel on Facebook
The 21st President of the United States: Failure or Inspiration?
Hiding Their Jewishness
The Jewish Pope: Following the Questions Home
Comments