How to Talk to a Neo-Nazi 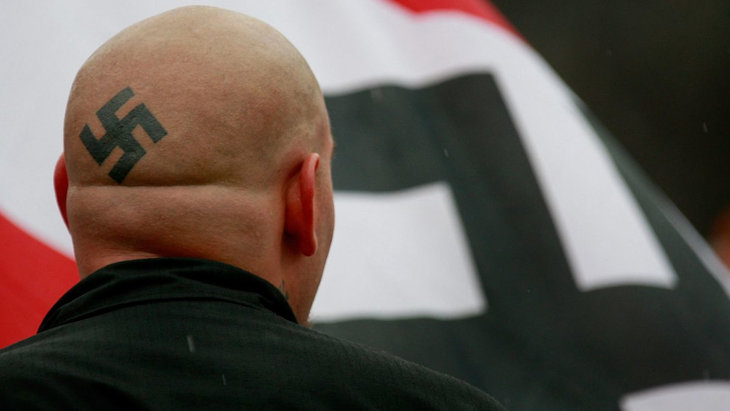 The anti-Semitic skinhead couldn't believe the kind storeowner was a Jew.

Daniel Kravitz owns Denver's Home Again Furniture and, like he says, you never know who will walk in the door. Saying only that he toned down the language a bit, Kravitz tells the story of his encounter with a unique customer:

“I receive a phone call answering a classified advertisement I placed to sell a black bedroom set for $250. During the conversation the young man on the other end of the line says he has only $700 – and do I have enough furniture in my store to furnish his whole apartment?

"I ask how big his apartment is. Turns out in addition to the bedroom set, he needs a dinette, a sofa, tables and a lamp. I say, if you’re not picky, I can furnish the apartment for $700.

"He didn’t show up until the next day.

“On his arm are tattoos. I cannot help but notice what they say: Kill N***ers and Jews. I realize right away who this individual is.”

Are you Dan? We spoke on the phone yesterday. Do you still have the black bedroom set?

“I say: ‘You’re the young man who says you have $700 to furnish your apartment.' I show him the bedroom set. We walk around the store. I can give you this sofa, and these tables . . . in 20 to 30 minutes we figure out what he wants. I throw in some dishes – glad to get rid of them.

“We get back to my counter and desk. I write up a receipt, including the inventory and the regular prices. The total comes to about $1,000, which I discount down to $700. I hand him the receipt for him to sign on the bottom. He looks over the receipt and says, ‘Boy, you really gave me a big discount.’

You won’t get in trouble for discounting this much?

I really appreciate it.

“I say: 'I’m a man of my word,' and he pays in cash. I help him load the furniture onto a pickup truck. We work up a sweat. When we we're done, I ask him whether he would like to have a Coke, or something else cold to drink. I have no other customers and have time to sit with him. So I give him a can of soda, take one myself.

“Now, this whole time, I kept observing him to see whether he was carrying a gun or a knife. You see that kind of tattoo – he’s not a choir boy.

“When we loaded his furniture his shirt lifted up, and I saw there was no weapon in his pocket. I felt comfortable he didn’t have a weapon.

“So I say: ‘I couldn’t help but notice your tattoos. Do you really believe that?’”

Hell yes I do.

“Have you ever hurt anybody?”

“How many blacks and Jews do you know?”

I don’t need to know any. I know they’re bad. Blacks are trying to take over the white women. Jews are controlling the banks and the government.

“I say: ‘I hate to tell you – I disagree with your propaganda. I grew up in Park Hill around a lot of black people. Unless you know somebody you can’t make judgments about a whole culture.’

“I saw that he was not connected to what I said. So I say: ‘I bet you don’t talk to your mother and father – if my son had the tattoos on his arms that you have, I wouldn’t talk to my son. I don’t think you talk to your parents.’”

“I realized I hit a nerve.

“The next thing I say: ‘It wasn’t that many years ago that your mother held you in her arms, and she loves you. I’m a parent. I know that your parents are hurt and miss you, and don’t approve of your ways.’

“Why would I lie to you about that?"

“I point to my front door and show him my mezuzah, and tell him that Jews put it on their doorposts.

“I show him my store hours and say: ‘Notice, I’m closed on the Sabbath. I live as a Jew.'

“'Absolutely not true. You know what? I think you’re a nice guy. I know by some of the things you’ve said to me how appreciative you are that I gave you a good deal. I know that your mother and father raised you with good values. Why you are a part of the neo-Nazis, I have no understanding.'

“'One of two things is going to happen to you. You’ll end up dead, or you’ll end up in prison and some huge bubba is going to take you for his wife. You need to think about what you’re doing. These are the only two possible paths if you keep on doing what you're doing.'

No. You’ve been nice to me.

“'I’ve only been nice to you because you gave me an opportunity to be nice to you. You hurt people you don’t even know because of the color of their skin or their religion. You need to think about that. The people you hang around with don’t care if you’re in jail or dead. But your mother and father do care.'

“Then another customer walks in.

“'Listen, I can’t talk more now, but if you want to talk to me more I’ll be glad to talk to you. I want you to think about what I’ve said to you because everything I’ve said is true.'

“I didn’t know what he thought. But he came in with the prejudice that Jews are greedy and money-grabbing. He had to realize, here’s a Jew who just gave him a really good deal, helped him load his truck and sweated with him. I think what hit him was when I said: ‘It’s not long ago that your parents held you in their arms.’ He left.”

Months later, maybe a year later, he came back to Kravitz’s store.

At this point in the retelling, Kravitz tears up.

“He was dressed completely different. His hair was grown out – no more shaved head – normal hair. He didn’t look like a skinhead. He was wearing a long-sleeve shirt, jeans and sneakers. He looked like a whole different person.

“I ask: ‘Did you reconnect with your parents?’

“He says: ‘I need to give you an apology. I realize now how offensive my tattoos were to you and how hurtful they are. I can’t afford it now – but I’m going to have those tattoos removed.'

“He gave me a hug and I’ve never seen him again.”

Reprinted from The Unexpected Road

One People, One Heart?

Teaching the Unteachable
The 21st President of the United States: Failure or Inspiration?
Hiding Their Jewishness
The Jewish Pope: Following the Questions Home
Comments