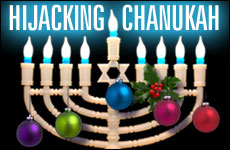 Chanukah is the last holiday into which we should be trying to shoehorn unrelated themes.

The holiday hijackers are at it again! First, Passover was transformed
from an inspiring commemoration of the birth of the Jewish nation
during the Exodus from Egypt into a catch-all festival that celebrates
the rights of every afflicted minority and fashionable cause imaginable.

This year, more groups are again seeking to use the old festival of
lights to force feed whatever cultural or political theme appeals to
them down the throats of the Jewish public.

Some who have jumped on the ecology bandwagon, now so pervasive in
American culture, want to reinvent Chanukah as a "green" holiday, in
which energy conservation and activism against global warming are
foremost in our minds.

In fact, the Coalition on the Environment and Jewish Life and the
Jewish Council for Public Affairs want us all to switch to more
efficient "compact fluorescent light bulbs" -- though perhaps what they
really want is for us to stop displaying those electric Chanukah
menorahs in our windows altogether.

The notion of using the idea of the Chanukah miracle of the one day's
supply of oil in the holy Temple that lasted for eight days as a
metaphor for conservation may be a stretch, but it
is clever.

Not content to merely ride the ecology hobbyhorse this December, the
JCPA also wants to use the season as a prop in its campaign
to raise awareness of poverty. It is backing a "Candle of
Righteousness" initiative that seeks to teach about the needs of the less fortunate by
encouraging families to donate their holiday gifts to groups that help
the poor.

That's a nice idea, especially since it can assist American Jewish
parents in weaning their kids away from the idea of Chanukah as a
Jewish Christmas in which the toys flow for eight days instead of one.

For all too many American Jews, Chanukah is merely a
blue-tinsel copy of Christmas

But the good intentions and causes highlighted by some of these faux
Chanukah campaigns notwithstanding, this trend is not something we
should regard as entirely benign.

By making Chanukah more "relevant" to a host of contemporary issues, the
promoters of these themes cannot only advance the causes they favor but
also can, albeit indirectly, reintroduce their audience to the powerful
message of their own traditions.

The truth is, for all too many American Jews, Chanukah is merely a
blue-tinsel copy of Christmas or an androgynous celebration that can
blend with it as the "Chrismukkah" cards and TV shows try to tell us.

Though the tension between the parochial Jewish aspect of our faith and
its more universalist tendencies is as old as Judaism itself, Chanukah
is not an empty metaphor into which non-Jewish narratives can be poured
at will. It is, in fact, probably the last holiday into which we should
be trying to shoehorn unrelated themes.

Far from being a Jewish version of "goodwill toward men" or any other
trendy contemporary cause, the original story of Chanukah is about
something very different: the refusal of Jews to bow down to the idols
of the popular culture of their day, and to remain resolutely separate
and faithful to their own traditions.

Even more to the point -- and so often completely eliminated from the
stories we tell our kids and even ourselves -- Chanukah is the story of
a particularly bloody Jewish civil war.

Wicked King Antiochus and his Syrian Greeks and their plans to force
Jews to abandon the Torah and embrace Hellenism are surely the bad guys
of the tale. But there's little doubt that for the original Maccabees,
the real villains were the many Jews who embraced assimilation into the
pervasive and seductive culture of the Greek world. It was these
collaborators that Mattathias and his sons really wanted to wipe out --
and eventually they did just that.

Even though the descendants of the victors of this war were themselves
a feckless and assimilated lot, whose misrule led eventually to
domination of the country by Rome, the outcome of the original revolt
has stood ever since as a warning against the dangers of discarding our
faith for previously owned versions of others' beliefs.

That has to be a frightening message for an American Jewry which
struggles to hold its own against the blandishments of the non-Jewish
world.

The message of the Maccabees is still strikingly
pertinent to our current situation.

Yet for all of the changes in the Jewish world that have taken place in
the last 2,200 years, the message of the Maccabees is still strikingly
pertinent to our current situation.

Diaspora Jewry faces enormous challenges that threaten its future via
assimilation, and Israel continues to remain under siege. So, maybe
what Americans should be doing is using Chanukah to highlight something
that might actually resonate with its true meaning: as a centerpiece of
a campaign to expand and raise the quality of Jewish education in this
country.

Going green may be trendier, but surely it would be more relevant to
take up the fight of the Maccabees against forces that are destroying
our traditions of learning. We could do this by finally rallying our
communities to support the idea that day-school Jewish education ought
to be available to more than just the rich among us. Similarly, we
could increase our efforts to improve the quality of the synagogue
schools for the Jewish kids who are sent there.

And perhaps instead of merely changing a few light bulbs, Chanukah
would also be an apt time to try to get more American Jews to actually
visit Israel, rather than just talk about it, a measure that is vitally
important to the future of Jewish kids who may just be able to hold
onto some shred of their identity.

It's no small irony that, while so many of us are working overtime to
superimpose other causes, no matter how worthy, onto our traditions,
many in the Arab and Islamic world are seeking to erase Jewish history
altogether as part of their war against modern Israel. Such efforts may
seem absurd to us, but when set against the knee-jerk universalism of
much of Diaspora Jewry, their effectiveness should not be
underestimated.

It may be that many of us are so alienated from our Jewish roots that
secular holiday themes have more meaning to us than the Jewish ones.
Yet rather than surrendering to this true December dilemma, this time
of year should be a reminder that it takes the extraordinary efforts,
as well as the faith of ordinary people, to keep the flame of Jewish
civilization burning bright in each generation.

Our tradition teaches us that the victory of the Maccabees was ensured
by faith. In order for that to happen, courageous individuals had to
step forward. The same is true today. If they do, then perhaps American
Jewry's leaders and organizations, who seem so eager to downplay the
specific character of our holidays, will someday follow.

Autism’s Growing Problem
Scientific Curiosity and the Divine Encounter
Mind Over Milkshakes
Love the Convert
Comments
MOST POPULAR IN Israel
Our privacy policy
Aish.com Is Looking for Great Writers