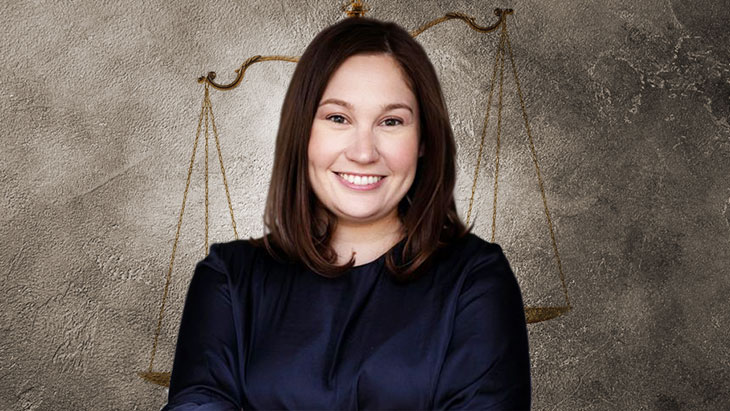 Amy Spitalnick is seeking justice against neo-Nazis involved in the 2017 Charlottesville rally.

Amy Spitalnick is aiming to stop American neo-Nazis in their tracks.

The 34-year-old executive director of Integrity First America, a nonpartisan legal organization, is leading an effort to halt American neo-Nazis by suing some of the key participants of the infamous 2017 “Unite the Right” neo-Nazi and white supremacist march in Charlottesville, Virginia. She recently spoke with Aish.com about her vital work.

During two days in August, 2017, much of America watched in horror as hundreds of neo-Nazis and white supremacists gathered at the University of Virginia in Charlottesville. Organized by right-wing provocateurs Jason Kessler and Richard Spencer, the gathering was meant to be a show of force for America’s burgeoning neo-Nazi and far-right movements. On Friday night, August 11, 2017, hundreds of men marched in military formation, surrounding students and other members of the public, holding torches, yelling “Jews will not replace us!”, “Blood and Soil!”, “This is our town now,” and other provocative slogans.

The next day, Saturday August 12, the neo-Nazis and white supremacists reassembled and marched through Charlottesville, holding swastikas and spewing anti-Jewish and racist slogans. As a group of protestors peacefully countered the neo-Nazis, one member of the Unite the Right rally drove his car into a group of anti-fascist demonstrators, injuring nineteen people and killing one, 32-year-old Heather Heyer. It was a defining moment for America. 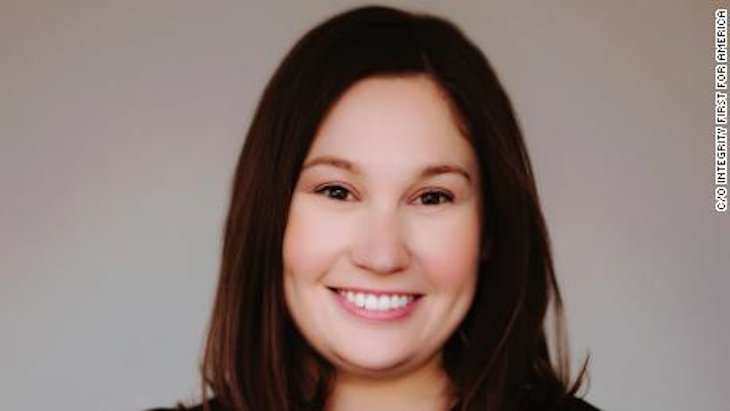 “Like many people, I remember hearing about the march and watching images of that weekend,” Amy explains. She was working for New York’s Attorney General at the time, and she was asked to interrupt her weekend and help craft a statement in response to the hate and violence that had just roiled Virginia.

Amy was hosting her sister’s bridal shower and relatives and friends had gathered together to celebrate. As she stood with her family, watching the news, the horrific images coming out of Charlottesville resonated with her own family’s history.

Both of Amy’s mother’s parents were Holocaust survivors. They’d lived in Poland, and her grandmother used to tell Amy about the terrible things she saw and endured during the Holocaust at the hands of Nazis and their enablers. Amy’s grandmother was rescued by a prisoner swap while she was on her way to a concentration camp: she spent much of the war in hiding. “She hid above a stove with her aunt,” Amy recalls. Her grandparents met in a displaced persons camp after the war.

Amy and her sister had decorated the site of the wedding shower with family photos, and the pictures of her grandparents gazed back at her from within their frames. “I wondered how horrified and baffled they might be if they’d lived to see neo-Nazis openly marching and attacking people on the streets of an American city."

Amy was approached by former Federal Prosecutor Roberta Kaplan who was putting together a legal case to sue some of the Charlottesville neo-Nazis. She wanted her help. Amy soon became executive director of Integrity for America, which is organizing the suit. "The search for justice is compelling to me,” Amy explains. “We have a justice system and we have a rule of law – it’s easy to feel frustrated and scared and hopeless but there are things we can do.”

The case that Integrity First for America is bringing, Sines vs. Kessler, is about conspiracy and planning violence and murder. “If they’d gone to Charlottesville and stood on a street corner with their hateful, anti-Semitic signs, that would have been legal,” Amy points out. But that’s not what the neo-Nazis did. “They used social media to actively conspire to bring violence to Charlottesville – it’s not a speech case, it’s a conspiracy case.” 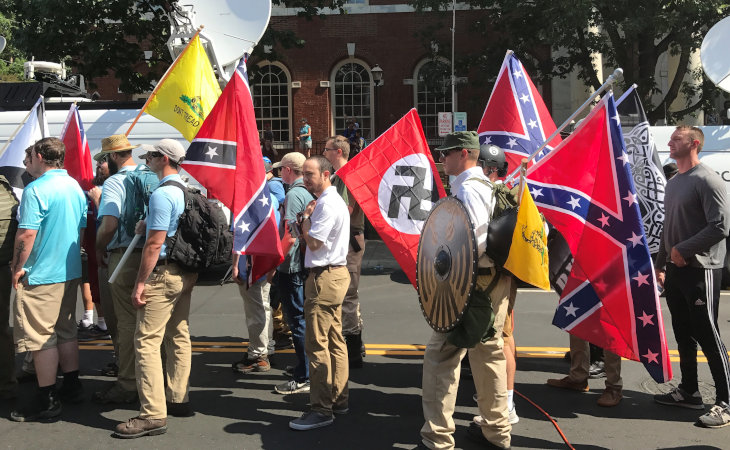 Organizers of the Unite the Right rally used far-right fringe social media sites to discuss ways they might harm people in Charlottesville. Discussions involved what weapons the neo-Nazis could carry – including guns, knives, lengths of pipe and axe handles – and what the likely legal consequences might be for using them.

One neo-Nazi who attended the rally suggested on social media that participants not bring ax handles longer than three feet: “Anything longer is too long to effectively bludgeon someone with.” The same neo-Nazi asked whether it was “legal to run over protestors blocking roadways”. He and the other neo-Nazis who were planning the rally used extremely anti-Semitic and racist language. The Integrity for America lawyers are arguing that this is proof that they planned to commit violence against racial minorities – which is illegal under federal law. “There is no First Amendment protection for violence,” explained Karen L. Dunn, a lead attorney in the case.

Integrity for America is arguing their case using a little-known 1871 federal law that criminalized efforts by the Klu Klux Klan to re-enslave African Americans. The law, known as the K.K.K. Act, makes it a crime for people to plot racially motivated violence in advance of an actual attack. “The K.K.K. Act gives citizens the right to protect themselves against this,” the very sort of premeditated hateful acts that the Charlottesville neo-Nazis engaged in, Amy explains.

The case is being brought on behalf of nine plaintiffs who were injured by the defendants. They include Marcus Martin, who attended the peaceful anti-Nazi protest with his fiancée Marissa Blair and her coworker Heather Heyer. When neo-Nazi (and defendant in this case) James Fields drove his car into the crowd, Marcus pushed his fiancée out of the way. He was struck by the car which killed Heather Heyer. Marcus sustained severe leg injuries, breaking his leg and ankle and requiring surgery; he continues to feel the trauma of that day.

Plaintiff Natalie Romero was also struck by the car. She was an undergraduate at the University of Virginia at Charlottesville and sustained a concussion and skull fracture and was knocked unconscious. Natalie continues to suffer from vertigo and debilitating headaches.

Hearing about the pain and shock the plaintiffs are still suffering motivates Amy to keep working to pursue justice for them – and for all Americans.

Even though hundreds of neo-Nazis and white supremacists took part in the Charlottesville rally, Sines vs. Kessler names just two dozen defendants. They include Jason Kessler, leader of the white nationalist group the Proud Boys, and Richard Spencer, who organized the rally.

Among them is Robert Gregory Bowers, the white supremacist who murdered eleven worshippers at the Tree of Life Synagogue in Pittsburgh on October 27, 2018. He communicated with the leaders of the Charlottesville rally on the far right social media sight Gab before his attack.

The shooter who murdered 51 Muslims in shootings in two mosques in Christchurch, New Zealand on March 15, 2019, painted a white power symbol on his gun that was popularized by one of the defendants in the Charlottesville lawsuit.

The shooters who murdered Lori Gilbert Kaye, a Jewish woman in Chabad of Poway on April 27, 2019 and the shooter who murdered 23 Mexican-American shoppers in an Walmart in El Paso, Texas, on August 3, 2019 both watched videos of the Charlottesville rally before carrying out their attacks.

“Since August, 2017, the threat of extremist violence in America has been made painfully clear,” Amy explains. “It’s important that people understand just how significant the anti-Semitic, white supremacist threat is… White supremacy is rooted in a hatred of Jews.” Even though white supremacists hate many groups of people, they seem to reserve special ire for Jews, who they believe want to “replace” the white race with non-whites. “They think Jews are puppet masters replacing the white race. We as Jews need to understand how dangerous this is – we have an obligation to speak out against it, whether they target us or any other community.”

As Sines vs. Kessler makes its way to trial, it is garnering widespread attention. It’s tentatively scheduled to begin in April 2021 and it could turn into a landmark legal case.

In the meantime, the lawsuit is already acting as a brake on some of the neo-Nazi groups named as defendants. “Suits like this have a long history of using civil judgments to bankrupt hate groups and their leaders,” Amy notes. That seems to be the case now. Richard Spencer has publicly complained that Integrity for America’s case against him has been financially crippling. The League of the South – a hate group named in the case – has said that they’re unable to afford a new building. Amy is confident that these and the other named neo-Nazi defendants will face real consequences once the case goes to court. “When we go to trial we expect civil judgments against two dozen of our defendants.”

Amy wants the case to remind people that planning racial hatred will always be punished. She and her fellow workers at Integrity for America have faced abuse and field constant threats of violence. Security is one of their largest expenses. Yet they are determined to continue their vital work standing up to hate.

Pharaoh, Putin and Why This Passover is Different
Korach 5782: Visit to Lift the Spirit
That Time The Ivy League Found A Way To Limit Jewish Enrollment
Would You Rather Be Right or Happy?
Comments
MOST POPULAR IN Current Issues
Our privacy policy