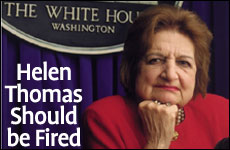 With her bigoted, anti-Semitic statements she’s placed herself outside the lines of civil discourse and decency.

UPDATE: On June 7, Helen Thomas pre-empted her expected firing by instead quitting ("retiring"), after being denounced by White House spokesman Robert Gibbs and her colleagues at the White House Correspondents Association.

Helen Thomas, longtime Hearst newspaper columnist famed for her front-row spot at White House press briefings and acerbic comment, made astonishingly bigoted, anti-Jewish, anti-Israel statements on May 27 at a White House event in celebration of Jewish American month. Here is the transcript of the exchange between David Nesenoff and Helen Thomas:

Nesenoff: Any comments on Israel. We’re asking everybody today for any comments...

Thomas: Tell em to get the hell out of Palestine.

Thomas: Remember these people are occupied and it’s their land. It’s not German; it’s not Poland.

Thomas: They can go home?

Nesenoff: So you’re saying Jews should go back to Poland and Germany?

Thomas: And America and everywhere else.

You can view the video below:

Helen Thomas should be fired by Hearst. Her remarks are out of bounds.

As of this writing the New York Times and other major papers have ignored the story. Contrast this to the reaction to Don Imus’s slur in April 2007 targeting African American players of the Rutgers University women's basketball team. It took little more than a week before he was fired by CBS and MSNBC, losing both his radio program and his television show. The mainstream media gave the story prominent attention for weeks, including updates on the controversy and opinion pieces denouncing the talk show host.

In this case, the mainstream media have been silent, with only a few outlets thus far covering it, including FoxNews, Politico and the Daily News.

The story has been driven by blogs, in particular the Drudge Report.

Please use the information in the alert as background for your own letter. Do not copy and paste directly from the alert and do not forward it to the media.

Helen Thomas should be fired by Hearst, dropped from the White House Correspondents’ Association and banned from White House briefings. She is also listed as a contributor to Liberal Opinion Week, from whose rolls she should be removed.

With her bigoted statements she’s placed herself outside the lines of civil discourse and decency.

• Urge the New York Times to cover the story prominently and fully. Email the NYT: executive-editor@nytimes.com

I deeply regret my comments I made last week regarding the Israelis and the Palestinians. They do not reflect my heart-felt belief that peace will come to the Middle East only when all parties recognize the need for mutual respect and tolerance. May that day come soon. (June 4, 2010)

The statement does not address or undo the offensive anti-Jewish, anti-Israel statements she made.

On the other hand, Clinton press secretary Joe Lockhart has said: “The good news is Ari no longer has the weight of government behind him in intimidating voices he doesn't agree with.”

Lanny J. Davis, former Special Counsel to President Clinton (1996-98) and White House spokesman has issued the following in regard to Thomas’s outburst:

Helen Thomas, who I used to consider a close friend and who I used to respect, has showed herself to be an anti-Semitic bigot. This is not about disagreement about her criticisms of Israel. She has a right to criticize Israel and that is not the same as being an anti-Semite.

However, her statement that Jews in Israel should leave Israel and go back to Poland or Germany is an ancient and well-known anti-Semitic stereotype of the Alien Jew not belonging in the "land of Israel" -- one that began 2600 years with the first tragic and violent diaspora of the Jews at the hands of the Romans.

If she had asked all Blacks to go back to Africa, what would the White House Correspondents Association position be as to whether she deserved White House press room credentials -- much less a privileged honorary seat?

Does anyone doubt that my friends Ann Compton, head of the WHCA, and Joe Lockhart, who believe in the First Amendment right of free expression as much as I do, would be as tolerant and protective of Helen's privileges and honors in the White House press room as they appear to be if she had been asking Blacks to return to Africa? Or Native Americans to Asia and South America, from which they came 8,000 or more years ago? I doubt it.

Of course Helen has the right as a private citizen under the First Amendment to speak her mind, even as an anti-Jewish bigot - but not as a member, much less privileged member with a reserved seat, in the WH press corps.

ABC’s Anne Compton defends Thomas saying: "Helen has been a columnist for about a decade now and her strong beliefs on the Middle East are well known. I think I saw that she regretted these remarks and realized they were hurtful and inappropriate. Ari Fleischer is a private citizen and certainly free to express his opinion that this was a firing offense even for an opinion columnist. I would agree with you that Helen enjoys a rather special status as the White House. But I think her employer will have to decide whether the comments went over the line."

Thomas has long been notoriously anti-Israel as CAMERA has noted.

The Age of Innocence

America's Lost Boys and Me

Can a Game of Peek-a-Boo Change the World?
How I Learned to Love the Multiverse
10 Big Jewish Inventions
A Journey through Jewish Sicily
Comments