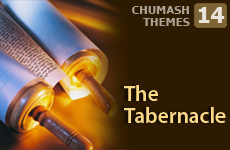 Understanding why four full parshas are devoted exclusively to this topic. 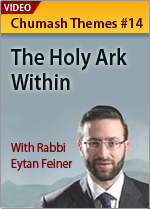 The second half of the Book of Exodus describes in great detail the construction of the Tabernacle (the Mishkan), the portable sanctuary portable tabernacle that accompanied the Jewish people during 40 years of wandering in the desert. The Tabernacle consisted of:

[The idea of animal offerings will be discussed in essay #15.]

To fully understand the meaning of the Tabernacle, we first need to examine the Torah portions that describe its construction. In the second half of the book of Exodus, we see the following structure:

We then take a detour:

We then return to:

This raises a number of issues:

Nachmanides3 describes the sequence of the Book of Exodus in the following manner: The Patriarchs created in their home and family a place of connection and service to God. The Midrash describes their dwellings as having a manifestation of the Divine presence resting upon them.4 When the Jews went into exile in Egypt, this connection was lost. The redemption and the giving of the Torah were designed to return us to this level of direct personal connection with God.

Therefore, the culmination of the Exodus is not just leaving Egypt, but when God once again dwells with his people in a home: the Tabernacle. Thus the construction of the Tabernacle is placed as an epilogue to the Exodus, rather than the beginning of Leviticus.

If this explanation is correct, however, then why is this Tabernacle a public building? Shouldn’t it instead be located inside each Jewish home?

Imagine your boss assigns you a task. There are two diametrically opposite ways he can do this. One is to give the goal and then a free hand to achieve it however you want. This gives the person tremendous choice. It shows that they are respected and viewed as responsible. On the other hand, it requires tremendous independent thinking and drive to accomplish that goal.

The other approach is to be given a very detailed task, with clearly defined goals and midpoints to reach that end. This constrains a person's independence, but the task will be simpler and the outcome more assured.

These are two approaches in service of God. Before the sin of the Golden Calf, the people were on an extremely high spiritual level. They had said "Naaseh VaNishma" – we voluntarily undertake this connection with God. In that circumstance, there is no need for a detailed list of steps for how to achieve this goal. However, after the Golden Calf, that relationship was lost. In order to achieve that degree of closeness to the Divine, there is a need for a step-by-step manual.

One can compare this to the relationship in a marriage. When everything is fine and the original love and romance were never impacted, then the couple can successfully navigate a close connection. But if something mars the relationship, an outside party must now provide direction for how to recreate the bond. Depending on the damage done, is the degree of direction needed.

The original verse commanding us to build a temple is: “And they shall make for me a temple and I will dwell within them.”5 The Tabernacle was meant to be within ourselves.

Originally, these commandments were to direct each person to construct their own home as a sanctified space. Each person's table was to be an altar, their lights a candelabrum, and their bedroom the inner holy of holies.6

However, the Jewish people built a Golden Calf, thinking it to be an intermediary between them and God.7 As a result they lost that direct connection, and now needed an external Tabernacle to create the connection. Therefore, the building instructions were written in the Torah once before the sin, during the pre-sin connection with God. The instructions are then repeated because now the level of connection was different.

This explains why they were so detailed: once we lost this connection, we needed marital counseling on how to recreate our Godly connection. It was not enough to be told, "Make your home holy." We needed exact instructions as to how to connect to God.

As mentioned before, there were various vessels in the Tabernacle (and later in the Temple in Jerusalem), such as the Aron (Ark), Shulchan (Show-bread Table), and the Menorah. Each of these has deep significance; by way of example we will examine the centerpiece of the Tabernacle, the Holy Ark.

The construction of the Ark is described in the following verses:8

Cover it with a layer of pure gold on the inside and outside, and make a gold rim all around its top...

Make two golden cherubs, hammering them out from the two ends of the cover.

The Ark contained the Tablets and a Torah scroll. As such, it represents those who are the repository of the Torah, the Sages. All the detailed aspects of the Ark thus teach us what the internal landscape of a Torah sage is meant to be.

Notice that the dimensions of the Ark are all half-cubits. This is different than all the other vessels, which at least one of the dimensions is a whole number. A half cubit symbolizes the idea that we are not perfect and whole.9 The Torah is meant to be studied by people who realize that whatever knowledge of God he may have, it is only a fraction of the entirety, and there is always more to study. Without this humility there can be no Torah study.

This Ark was a rectangular box made of wood, covered with pure gold from the inside and from the outside.10

The need to cover the outside of the Ark with gold is understandable: The centerpiece of the Mishkan should certainly be majestic and regal. But why put a layer of gold on the inside as well?

The Talmud11 explains: A person’s outward appearance must be an accurate reflection of their insides as well. In other words, don’t be a hypocrite.

[The Hebrew word for face – “paneem,” is nearly identical to the Hebrew word for interior – “p’nim” This teaches that the face we present must reflect our insides. Contrast this with the English word “face,” which shares its origins with “facade,” meaning a deceptive appearance.]

Yet if the Ark is covered with gold both on the inside and the outside, then what need is there at all for the shell to be made out of wood?! Why not simply make the ark one solid piece of gold? And while we’re at it, isn’t a golden layer on the outside sufficient to beautify it; why is there any gold on the inside at all?

A person is made up of three levels. The most internal is one’s “desire,” his basic needs and wants. These can be as mundane as food, shelter, and as sublime as love. But they should also extend beyond our own personal selfish wishes and include a deep aspiration for spirituality. This is represented by the internal layer of gold.

The outer layer represents a person's actions. A person is expected to act correctly and nobly at all times and in all circumstances.

The middle layer represents all of the introspection that a person goes through as they translate their desires into actions. If this layer was also gold, we would think that the Torah is demanding from us an impossible task. We would be expected to be angelic beings with no human conflicts and angst. Therefore, the middle layer is not the perfection of gold, but plain wood.

This aspect is represented specifically by wood. Gold is static and mineral. Wood is something that grows and develops. So we strive for gold, but realize that we are meant to struggle and grow to overcome this.12

The cover of the Ark is made form a single large piece of gold. The artisans chiseled out, as an integral part of the cover, two cherubs. They were in the form of a man and woman facing each other. The Talmud13 tells us that during the festivals the kohanim would open the entrance to the Ark and show the nation the intertwined cherubs, as a symbol of the love between God and Israel.

Rabbeinu Bachya14 points out that the cherubs could have been modeled on a parent and child, rather than a couple. However, God specifically chose this metaphor to emphasize the unique bond between us. Just as a husband and wife have no intermediary, so too our connection to God is direct. One does not need a messenger or go-between to approach God; He wants to interact with each one of us personally. 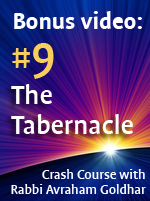 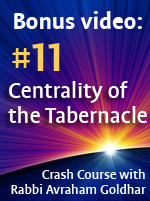 That is also why the cherubs are hammered out of one large slab of gold, rather than being individually made and then attached to the cover. It is to emphasize this inherent bond that we are forged from one common basis.

One final thought: How are we today to relate to the concept of the Tabernacle, with the Holy Temple in Jerusalem having been destroyed at Roman hands some 2,000 years ago?

Earlier we quoted the verse, “And they shall make for me a temple and I will dwell within them.”15 Today the Tabernacle is within each Jewish home, regarded as a “miniature Temple.” One’s table is the altar,16 and the food is the offerings. When we sanctify our most mundane acts of eating and living, by reciting blessings over food and speaking works of Torah at the meal, we elevate ourselves and our homes, achieving in some measure the very purpose of the original Tabernacle.

When a family lives together in harmony, that itself creates spirituality. Where husbands and wives, parents and children strive for the good of all members of the family, that creates a Temple of the home. Even the bedroom becomes a Holy of Holies, where we emulate the cherubs in their intimate relationship.

Chumash Themes #15: Understanding Korbanot
Deep Breaths
What Happened to the Truth?
The Japanese Everything Bagel Spice Recipe
Comments
MOST POPULAR IN The Bible
Our privacy policy