Banu hoshekh legharesh -- "We have come to banish darkness." Thus begins a famous Chanukah song, and no phrase better encapsulates the holiday's deeper meanings. This year, as a United States soldier serving in Iraq, I and several of my colleagues lit a Chanukah lamp and uttered those words in a place that had never before heard them: the former presidential palace of Saddam Hussein, in the capital city of a new and free Iraq. 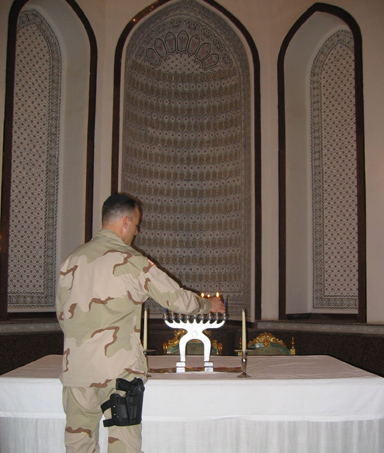 One is hard-pressed to imagine a holiday whose themes are more resonant with the events unfolding here: A spectacular military victory, the defeat of a despot, the re-sanctification of what had been desecrated. Truly, the banishment of darkness.

Chanukah commemorates the rededication of Jerusalem's Temple in 165 BCE. Israel was then ruled by Syria's Hellenist king, Antiochus IV, a brutal megalomaniac who gave himself the title Epiphanes -- "god manifested." In a campaign of merciless persecution, he murdered members of the priesthood, outlawed Jewish rituals, and desecrated the Holy Temple.

The priestly Maccabee family led a daring revolt and defeated the Hellenist armies. After recapturing the Temple, Jewish partisans rededicated the place by kindling its sacred Menorah. To this day, Jews celebrate the relighting of that ancient Menorah, to remember the victorious freedom fighters whose courage stemmed from an abiding faith that God will cause good to triumph over evil, and light to banish even the darkest of hours.

For too many years, the people of Iraq have suffered horrors that defy imagination. Like Antiochus, Saddam thought himself to be like a god, or at least like those demigods of Mesopotamian history, Nebuchadnezzar and Hammurabi, with whom his boundless vanity inclined him regularly to equate himself. "Epiphanes" indeed -- Saddam dispensed licentious pleasure and horrible pain, life and death, with the nonchalance of one who thought himself above humanity itself.

I myself have seen some of the evidence of his horrors, and I am sickened by them. I have met Iraqis who lost their closest relatives to Saddam's killing machines. I have walked the halls of the decadent monuments he built for himself while his people wasted away for want of food and freedom. I have visited Saddam's execution chambers at the notorious Abu Ghreib prison. I saw the ceiling hooks that were used to torture prisoners. I saw the prison's infamous "medical wing," used for human experimentation. And most shattering of all, I saw the desperate messages scratched on the walls of hideous cells next to the death chambers. Some of those messages appear to have been scribbled in excrement.

I shuddered as I imagined the suffering endured by the forgotten victims of that terrible place -- the excruciating physical pain, the agony over loved ones left behind, the devastating sounds of executions conducted only a few feet from their cells. I could almost hear the screams of torture and soft whimpers of despair echo along the walls' unforgiving concrete.

Perhaps I am especially prone to feel empathy for Iraq's prisoners of conscience, for my grandfather was one of them. He and other leaders of the once large Iraqi Jewish community were arrested, paraded through the streets in leg irons, and summarily jailed. But my grandfather was comparatively fortunate, for he was imprisoned many years before Saddam took the country to new depths of depravity. And after serving the prison sentence given him, my grandfather was released.

Many of Saddam's prisoners were not so lucky. Many Iraqis unfortunate enough to be deemed ethnically or religiously undesirable, or who displayed the intolerable audacity of free thought, entered Saddam's prisons with the knowledge that they would never again see their loved ones. And in the twisted reality of the former Iraq, they may well have hoped never again to see their loved ones, for Saddam's regime was known to torture children in front of their parents. Whereas my grandfather was able to assuage his suffering by rejoining the people he loved most in this world, the victims of Saddam's apparatus of death could only console themselves by scrawling desperate messages on the walls of their cells.

LIGHT IN THE PALACE

It is the defeat of this sort of profanity that Chanukah celebrates. It was Antiochus' consummate ungodliness -- all the more so when contrasted with the sacred Temple worship that he prevented and defiled -- that the Jews succeeded in vanquishing. But what can be more ungodly, what more profane, than torture, mass murder, and genocide? Such evil had been a staple of life in Iraq. But not any more. We have come to banish darkness. 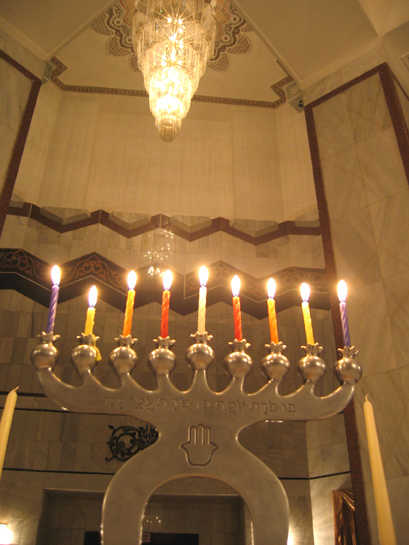 This Chanukah in Baghdad, in a large and lavish building, the gentle glow of a Chanukah lamp shimmered throughout a cavernous room. One of the objects caught in its radiance is a gilded chair that used to serve as the tyrant's throne, and the palace in which it sits used to be the capital building of his reign of terror. Today, the chair is empty, and the palace houses the apparatus of Iraqi reconstruction.

As my colleagues and I remember the Maccabee bravery of yesteryear and the re-sanctification of the Temple, we pray also for the brave and indefatigable people of Iraq, who day by day are rekindling their flames of hope and re-sanctifying their great land. They are banishing the darkness, and we wish them Godspeed.

A version of this article originally appeared in The Miami Herald.

Elan S. Carr, an attorney, is a first lieutenant in the U.S. Army Reserve. He led the Chanukah observance in Baghdad using a lamp donated by a Jewish Iraqi artist.

The Night the Rebbe Danced the Kazatsky
The 21st President of the United States: Failure or Inspiration?
Hiding Their Jewishness
The Jewish Pope: Following the Questions Home
Comments